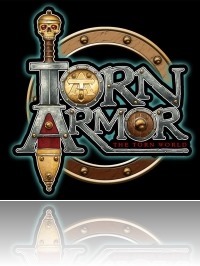 I am not one for wargames because they take too long to play (usually) and I am not one for long games. When Alyssa Faden came up with Torn Armor, I was hooked and i backed the Kickstarter.

Then I had Alyssa in the podcast for an interview and I was even more taken by the game which funded.

And then the problems started.

Stretch goals were hit to unlock a number of truly gorgeous looking miniatures and more than once Souljar Games were let down to the point that a company even kept several thousand dollars and refused to give them back though they never produced the work they were hired to.

Still, despite the delays and the problems, they kept going and going until they’ve produced the game we have in this video.

However, despite all the problems, have they managed to produce a quality game? Are the contents of this box worth the amount of money you have to pay to get your hands on it?

If you have enjoyed this unboxing video, please consider becoming one of our Patreon sponsors. 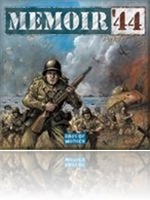 A REVIEW IN HONOR OF THE D-DAY LANDINGS ANNIVERSARY

It’s been 70 years since the D-Day landings and to celebrate the souls that fought in the war, for the next two weeks we’ll be having a look at World War 2 themed tabletop games. Memoir ’44 has been a mainstay of the genre for ten years now and is a game that still sees a lot of support from the publishers. It uses the Command & Colours system which has been utilized in numerous other war games.

p.s. Just like in all good things, our video this week features a post-credit sequence. Make sure you stick around! You won’t be disappointed.

Academy Games and its charismatic leader are well known for producing historical games that are, as it happen, easy and fun to play without compromising on historic accuracy.

In this case 1775 deals with the the start for the American Revolution after Britain imposes unwelcome new taxes. Yeah… that was me being understating.

Anyway, there was a lot of fighting and a lot of people died and the French were there and it got all messy and unpleasant.

So Academy Games made a game to teach us about the horrors of war and the cost it carries. And yet they manage to do that in a way that doesn’t put you off from it.

At least that’s been our experience with other of their games. We had to try 1775 and have a go to see how it plays for the first time. And now we’re telling you all about it!

If you have enjoyed this podcast, please consider donating a small amount of money to help support this website or simply click the advert below. Every click helps us a great deal! 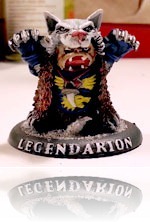 Here it is the second update of my beloved Knights of the Red Blade and just how has my dear force under construction fared this week I hear you cry. Well no doubt I’m about to tell you. It’s been a fantastic week of hobbying, I’ve painted, I’ve glued and most importantly I battled!… Well not so much on that latter account unfortunately. No this week the more creative side of our beloved hobby has defiantly dominated my time, amongst less pressing matters such as a 3rd year film dissertation and a grad film project… but that’s by the by. No unfortunately The Knights of the Red Blade spent the week sharpening their blades and polishing that armour, with the intentions, of possibly dazzling those foul demons to death when they finally do take to the battlefield.

So I finally finished work on my Grey Knights Brother Captain, or as we all know him as Sir Markus the Red Blade, no doubt my future enemies are trembling in fear at the prospect of facing such a temptuous warrior on the battlefield. I poured what seemed like endless hours of work into this guy and hopefully that is evident in the finished result. Initially I wasn’t happy with my work but seeing the finished on a painted base and using some finishing touches tips that I’d picked up from the guys down at my local Games Workshop in Cardiff such as using washes in particular Reikland Fleshade on the prominent white sections of Sir Markus, as I wanted to create a slightly dirty white armour for this guy as he’s just that little bit more pure and regal (or at least supposed to be) than you’re regular Grey Knight and this shade really made the white pop out whilst adding some nice shading and depth to those deeper parts of the models, It’s a theme that I’m going to continue into the construction and painting of my Paladin Squad, as the two units will no doubt be accompanying each other into combat regularly.

The paints themselves, the Citadel range is simply fantastic, although they cost at little more a theme I’m finding is prominent through much of the Games Workshop range, you can’t dispute the quality. I tried a variety of other paint makes such as P3 the Privateer Press produced paints and Game Color but found them quite watery and difficult to work with. Similarly although much of the war gaming community seem to be opposed to Games Workshop in general, and no doubt some of their business decisions can be quite questionable, I can’t say a word against the guys at my local GW, they offer great advice on painting and army building. It’s somewhat more useful to obtain in person rather than via YouTube. So I strongly recommend that any of you new hobbyists out there no matter what you’re working on, take advantage of the free advice that’s on offer! I’m actually headed down there today to pick up some Citadel Paint Pallet’s as I was un-able to find them anywhere else on the web for a reasonable price!

Lastly in the past week I’ve begun the construction of my first and possibly only Paladin squad, this is quite an improvement for me as I’m already finding myself easily distracted by smaller more interesting hobbyin’ projects (I had to get that Dwarf piloted bauble painted up in time for Christmas and who could refuse painting something this adorable!,) something which is threatening me ever actually completing my entire Knights of the Red Blade crusade and no doubt you guys are just as keen to see the entire force take the field, and as you can see I’d really better start making head way on that.

For the construction of the Paladins themselves, I wanted something a little bit special. The bas Grey Knight Terminator kit produced by GW is simply fantastic and has been a pleasure to enjoy, It’s filled with lovely little accessories which add some great narrative features to the models themselves, “Look at Sir Javar slaying that demon” or “ Sir Mekeses was protected from the taint of the warp Demon due to the protection of the ancient scrolls and tombs adorning his armour”, Just a few examples of my own. I also once more returned to Sci-Bor Miniatures and got myself some Roman Legionary Sci-Fi marines to make up the bodies of the Paladin, this way they’ll fit in nicely alongside Sir Markus (Grey Knight Brother Captain c’mon keep up!), I also splashed out a little bit through a web site called Bitz-Box, which are a fantastic resource for all those extra accessories you’d like to adorn you’re miniatures without purchasing full kits. I myself bought a few parts from the Bretonian and Empire ranges of Warhammer Fantasy really playing up that heraldry and Knight Aesthetic for my Paladins.

Well once more we come to the end of the Tales of the Red Blade, this week has been predominantly hobby focused but then that’s what were here for isn’t it?, but with my first session of Rouge Trader and a few games scheduled for the coming week, including a doubles game featuring some tasty Grey Kights on Eldar action. We’ll have plenty of action to discuss next week no doubt!

So please do come back for the next instalments of the Tales Of the Red Blade. 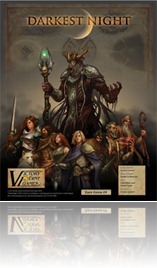 There are a lot of companies out there that claim that for them the gameplay is what matters, not the game components. And I mean a lot.

Victory Point Games, though, is one that lives by that motto. They have been producing games that came with next to nothing components and in a little bag. And there have been some gems in those bags!

Now they’re stepping up the production value of their games and have found a way to make the games boxed in an inexpensive way so they can have more market penetration.

Of course they don’t want to compromise on the quality of the game, but have they done enough to compete with the big boys and grab shopper’s attention at your FLGS?

Let’s open the box and find out!

Paco Garcia Jaen takes a look at the Darkest Night.