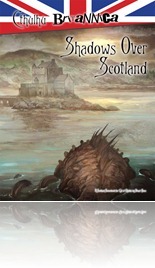 It is no secret I am a fan of Cthulhu based games. Even though Lovecraft was pretty much forced upon me by a friend who’d insist I had to read some of it and read The Call of Cthulhu begrudgingly, I couldn’t help falling in love with the game. As I read a few more books and got to understand, or at least think I understand, some of Lovecraft grief and sense of impotence, despair and doom (I went through a few rough years. What can I say?), I have paid a lot of attention to the way Chulhu games are written. If they don’t have a few ingredients to their recipe, they have failed.

Those ingredients are not easy to define, but one that really has to seep through is the author’s understanding of the mechanisms of Mythos dynamics. With that I mean the relationship of Mythos with the places they inhabit, their origins, the consequences of their actions… And most importantly the relationship between the author and the book.

There is a point to all this.. bear with me.

Shadows Over Scotland is a hard back, black and white book, part of Cubicle 7’s Cthulhu Britannica series. It is the product of quite a lot of writing by Stuart Boon, and believe me when I tell you there is a lot of material in here! This book is a weighty 280 pages divided in 5 chapters.

The first chapter is a fairly short introduction to Scotland in the 1920’s, a bit of history of the region written for the keeper, a Mythos timeline and some notable figures of the time. When I say it was written for the keeper, I mean that. This part of the book offers the history of Scotland from Pangaea until now, including when, where, who and how from the Mythos inhabited, or indeed inhabit, the country to this day.

Although it’s just a few pages long, the excellent blend of real history and fantasy is very well managed, so it manages to grab you from the start without becoming a chore to have to go through to understand where you are at. Good start

The following three chapters are descriptions of the three main areas of Scotland. The Lowlands, the Highlands and the Islands. Through this chapters, Boon gets closer to the history, geography, culture, wildlife, Mythos life, people and some of the cities in every area.

Edinburgh, Glasgow, St. Andrews, Aberdeen, Fort William, Inverness, Kirkwall, Portree and Stornoway are described in some detail. A map of the city centre is provided, with the main landmarks and roads neatly marked. The  maps are simple, but very effective and very much in keeping with the overall “old looking” style of the book.

The landmarks are given with plenty of explanation about their connection to the Mythos creatures and they’re pretty much ready to be used. However, enough flexibility has been given to those  locations so they could be altered to host any of the creatures that have set foot in Scotland in the last few million years, so you won’t feel constrained by the descriptions.

Almost the same can be said about the People of Note. They are just as well described and as well linked to Scotland as the landmarks, but, for obvious reasons, they’re not as flexible. They are provided with all the stats and percentages though, so, again, they can be dropped into any story right away.

The three chapters form some half of the book. Truly plenty of space for Boon’s imagination to run wild. And run it does!

Both established and completely from-scratch creatures are provided. From the ever present cultists, Deep ones and Mi-Go, to the unique and truly horrific Thane of Cawdor and the indestructible Rogryndr the unnumbered. From the repulsive and lethal Old Maggie, to the almost comic Salty Bob (beware, comic and harmless are indeed not the same!). Stuart Boon manages to match his creations to the land truly well. At no point a doubt crept in my mind as to whether they should, or could, be there or not.

Sometimes he does leave numbers deliberately vague. For example the number of Ghouls in Edinburgh’s Necropolis, or the number of people tainted by the Deep Ones in coastal and island towns. However, he does provide numbers for one of the biggest Deep One cities off the coast of Scotland (won’t tell you where, though… get the book).

This trick happens to work very well, leaving the keeper with plenty of space to make adventures more or less difficult to match the party.

The second part of the book are 6 scenarios or various difficulties and length. Most of them are rather difficult and the party will probably suffer greatly to reach the end, so don’t think you can bring beginners into this adventures without considerable amends.

I will not go into detail about every adventure plot. It would take a long time and would probably ruin some of the surprises the adventures come with. Instead I will tell you that they involve from the Deep Ones to unique monsters and creatures like you have never seen before.

Cleverly enough, Boon uses the adventures to actually expand the locations, people, tradition and general knowledge of Scotland he introduced in the first part of the book. Thus this part feels like you are learning without having to try, and it is fun too.

As the difficulty hasn’t been hampered for these adventures, neither have the scenes and people. Madness is truly present and the actions of the antagonists do reflect this. There is sheer brutality in some of these adventures, and situations that, if you think about it for too long, are truly disturbing. Very, very good!

A really useful addition to the adventures is the plot map. A simple grid to help you map the relationship between the NPCs, locations, motivations and the clues that lead to each one. No more flicking the pages to find out who’s in the Necropolis and what clues are there. It’s all in one page and available at a glance. Excellent!

This book is setting a standard to how resource books for Call of Cthulhu should be.

For starters the layout and art direction is very friendly. Two columns of easy to read font. Good graphic design throughout the book, great illustrations, very much in line with the scary tones of the book… it works and it doesn’t feel heavy to read, even with vast amounts of information being delivered all the time.

Furthermore, the PDf has been very well indexed and the layout works fine on tablet too. Even with the serif font, which is a bugbear of mine.

There is only one little point that I wished they had done something about. Some of the locations maps in the scenarios don’t have a scale. Rooms, halls… there is no easy to way to figure out how big they actually are, which is a shame. Still, it probably won’t detract from the fun of the place, so hardly something to complain about. Just one aspect I would have liked to see.

There is one thing to do with this book, and is to take it in parts and not take the whole thing in one go. If truly the number of Deep Ones, Cultists, Mi-Go, Serpent People, Ghouls and other creatures are there, you wouldn’t be able to throw a stone without hitting a Mythos creatures. I wouldn’t do that if I were you.

therefore I would say don’t take everything in one go. Taylor what you need from this book and leave a few things out. For example of your adventure/campaign features Mi-Go heavily, don’t add too the Serpent People and the Deep Ones… leave them out and use them in another campaign.

there is so much in this book that a few other books could easily span off it. Mi-Go over Scotland, Deep Ones Under Scotland, Serpents of Scotland, Horros from Scotland… there is plenty to inspire you to come up with more and more material of your own.

Remember what I said about the relationship of the author and the book?

Well, Stuart Boon has proven, beyond any doubt, that he can understand the land he’s writing about, an the Mythos that populate it. I can’t ask anymore from anyone.

Full 5 stars for this magnificent tome (and a few shady comets with something wriggly inside).