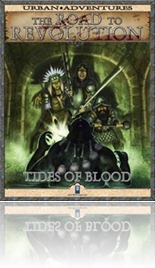 This part of the campaign arc takes place in the Great City’s dock ward and takes a detour from the open, (and inc ase of part 2, rather horror-themed) investigation of part I and II to take us on a rather furious ride while taking into account the different possible endings of part 2 of the arc.

That’s about all I can say without going into details, so from here on, the SPOILERS (also for Part 2!!) reign – potential players please jump to the conclusion.

Ok, so this adventure has a hard challenge ahead of itself, seeing that the PCs could have either destroyed or even forged an alliance with the dreadmanse from Part 2, implying two vastly different starting requirements and agendas. Surprisingly, the adventure manages to provide for both alternatives without resorting to reprinting information/wasting space on alternative plots. The adventure kicks off as many others have over the time, by an assassination attempt on the PCs, only that this set-up is smarter than usual and the mastermind behind it has taken the opportunity of failure into account, luring the PCs after the attempt into a desperate fight in a ware-house, from which they are hopefully saved by a street urchin in service to the baroness, a legendary, corpulent madwoman who, after a tragic life indeed, has taken to raising street urchins and teaching them the arts of thievery.

Unbeknownst to the PCs, her erstwhile lover, Blood Senator Vulgrax, is also one of the major players behind the recent upheavals in the city. Note that possibly the senator might be their employer instead, depending on the outcome of part 2. The baroness, however, wants this man destroyed for breaking off their betrothal and beating her to miscarriage for her affair with an unknown soldier, initiating her descent into desolate madness. The PCs are now to invite said senator to a dinner or otherwise distract him so her children can steal the senator’s ledgers. However, not all is rosy with the madwoman either and she proceeds to send the PCs after Gulga Feck, dread necromancer and kidnapper, who has allegedly abducted the child with the ledger. Never mind that the baroness has seen to it that Gulga gets his hands on the ledger in order to get rid of him once and for all.

After the PCs deal with the sick necromancer, they finally reclaim the ledgers and get a hot lead: Wiggan the Bold seems to have an insidious plan that will bring the two plot-lines back together again: The man has operated a salvage-operation via some degenerate Fish-people (the Siluri) and an assault on his ware-house will give the PCs a hard time – after all, Wiggan knows full well how to escape through the sewers and a lot of deadly foes await the PCs desperately chasing the escaping conspirator – from degenerate Roachkin to a Chuul and aforementioned Siluri, they’ll be hard-pressed to catch Wiggan. Even worse, when they finally dealt with him, the plan he hatched demands immediate attention: A ship, chock-full with explosives under the magical command of the Siluri is heading for a warehouse of Vulgrax which is conveniently stuffed with alchemical fire, resulting in two possible finales, one of which is the blaze that threatens to engulf the dock ward and the other has the PCs trying to board and stop the ship.

The adventure concludes with a 5-level PrC class of the sewer runner, fluff information on the roachkin and the stats for the new fish-men, the siluri.

Editing is good, though not perfect – I encountered some typos that could have been taken care of with another pass at editing. Formatting is top-notch and layout adheres to the b/w-two-column standard that is both printer-friendly and elegant. The pdf comes with extensive bookmarks. The artworks are b/w and generally of good to very good quality. Special mention should be given to the cartography, as each location has its own artwork and if you own the great city blueprints, you get even more out of e.g. the dinner-scene.

The adventure feels quite different from its predecessors, which is not a bad thing per se – though I enjoyed them immensely, the action-laden romp we have here is a fine example of good adventure design, managing to provide for 2 different storylines in one adventure and offering a furious finale in which something truly is at stake.

While this makes for a satisfying and nice adventure, it also means that this instalment of RtR is more linear than the predecessors and slightly less brainy, i.e. more on the brawn-side than the prequels. The plot also hinges on PCs trusting dubious NPCs or at least helping them, which may pose problems for some groups. In the end, though, this is still an excellent adventure, though not one that can stand up to the astronomic quality of “the Bloody Fix”, as it lacks the sheer density of awesome ideas – while there are some (baroness!), the adventure felt just like a “very good” adventure. Be aware that I’m nagging at a very high level and that this is still worth the asking price. However, due to the lack of handouts (which accompany all the other RtRs) and the minor editing glitches, I can’t find it in me to give this one the full 5 stars, my final verdict will thus be 4.5 stars, rounded down to 4.