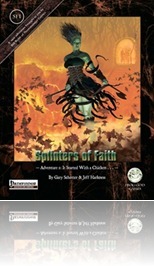 This being an adventure review, it contains SPOILERS. Even worse, since it (and I) discuss the metaplot, there are MASSIVE SPOILERS for the whole series.

Players should really skip to the conclusion of the review.

All right! Once upon a time, a priest-king named Akruel Rathamon, a vile man of unrivaled power subjugated all the lands under his tyrannical rule in the name of a deity that we now know as Orcus and said priest-king was winning the war, especially after turning himself into a super-powered version of a vampire with lich-like immortality. To stop the tyrant, an artifact was crafted, the Scepter of Faiths. Said scepter was jammed into the tyrant’s heart – but it didn’t kill him – unbeknownst to the forces of good, his true life-force was sheltered elsewhere and thus his empire and minions faded to distant memory, while a mausoleum was built over his motionless, artifact-staked body. Over the years, a natural hill has formed over the crypt and all the once powerful wards have slowly deteriorated…

Deteriorated is also what should be best used to describe the village of Lessef – 30 houses (more shacks, really) form a dilapidated, poor community that borders on being a ghost town. Even the impromptu Inn is only a side-business run by the local priest and almost all youth seems to have (justifiably) fled this place. Looming over the hamlet, a church called aptly Poverty’s Brethel, situated on a large hill, remains standing. The town is aptly presented in its state of dilapidation and the town has a problem – a rather smart fox has been killing the settlement’s chickens, threatening the little livelihood the place still has left. Of course, the culprit is not a fox, but rather a group of thugs guarding a badly hidden excavation site on the other side of the looming hill. Hired by a necromancer who has managed to revive the priest-king, they await a return of entities who have already left via magic. Once the PCs have defeated the thugs, they’ll have to explore the decayed tomb, battle its ghoulish inhabitants and find both the shattered scepter of faiths and cryptic instructions on how to recreate it to stop Akruel once and for all. It should also be noted that some side-quest-style hooks that entwine this adventure with other installments of the series are included.

Editing and formatting are very good, I didn’t notice any significant glitches. Layout adheres to an easy-to-read two-column standard and the b/w-artwork and maps rock. The pdf unfortunately has no bookmarks. Oh boy, on the one hand I enjoyed this adventure, on the other hand, I did not. Let me elaborate: This is a sandbox that is not a sandbox – the village is depicted in a compelling way that hearkens back to classic fantasy, where a looming threat of human extinction was present, however, essentially we get the village as a kind of gazetteer. After the gazetteer, some rudimentary information on the thugs is provided and then there’s the dungeon. The adventure does not cover the PCs setting traps for the “foxes” (no map of the chicken stalls etc.) and assumes the PCs find the perpetrators etc. The dungeon is, apart from the foreshadowing elements, just, I’m sorry to say, boring. The maps are not depicted on pages of their own or in large, making handing them out to the players harder than it should be. Additionally, we don’t get player-friendly maps of the village, temple or dungeon. And then there’s the amount of content: 13 pages is just not enough for 5 bucks – especially when taking into account that the background story further diminishes the page-count of the overall module. I really liked the atmosphere transported by this module and thus it pains me to do it, but for the price, I don’t consider this module a good investment. It’s necessary for the series, though. Thus, If you’re planning to run the arc, this is 3 stars for you. For those of you undecided/looking for a nice introduction, I can’t recommend this – for you, this module is 2.5 stars, rounded down to 2 for the purpose of this platform.

Splinters of Faith 1 is available from: