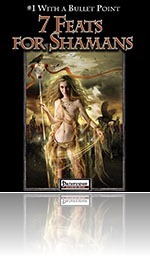 Editing and formatting are good, but by far not up to SGG’s excellent track record – duplicated information and slightly less concise writing than usual plague unfortunately this pdf. Layout adheres to the elegant 3-column landscape-standard and the pdf has no bookmarks, but needs none at this length.

I really like the shaman and my player was looking forward to more fodder for it and this pdf does deliver – though with more rough edges and ambiguities than I’ve come to expect from Super Genius Games. Idea-wise, these feats are cool and awesome, but in execution, their benefits seem a bit off, some minor incongruities remain..and in spite of offering some cool options, as a reviewer, I can’t go higher than 3 stars – were the content not that nice, I probably would have gone lower.

With a Bullet Point: 7 Feats for Shamans is available from: