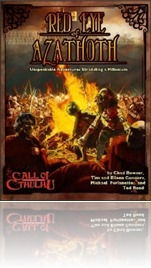 The anthology of adventures begins with a prologue depicting the rather complex plotlines that span a millennium and that will have your investigators struggling against terrible odds…and die. A couple of times. For one of the basic ideas of the anthology is that all of the adventures are connected via reincarnation – the Investigators actually are the same individuals and, via the new, story-driven Incarnum skill, may even tap into skills they had in past lives etc. – for a price, of course. And the currency is your sanity…

Each of the adventures comes with 4 pregens and the campaign is very much centred on using pregens suitable for the respective eras, so if you do plan to run these adventures with more characters, you should plan in some additional time to create fitting characters.

That being said, this is an adventure and thus the following text contains massive SPOILERS. Investigators should cease to further investigate and jump to the conclusion.

Are you a Keeper? Sure? All right! The overall storyline centres on a cataclysm of proportions most terrifying: Lei Peng, ancient Chinese sorcerer and vassal to the Denizens of Leng jerks his leash and breaks free of his master’s control. While the Denizens seek to unravel the truth behind a brass-sphere artefact of Lei Peng and want to harness the “Red Eye of Azathoth”, the red harbinger star to make earth their own playground and possess mortals at their leisure, Lei Peng uses the original sphere to reincarnate over the ages and wants to summon Azathoth to earth and usher in a cataclysm of madness and despair under his reign. The only drawback of Peng’s ceaseless reincarnation (his true life-force secured in the dreamlands) is that the displaced souls of his former incarnations also resurface with each of his sojourns to our earth – cue the Investigators! A brilliant way to make the characters WANT to stop Peng and end their never-ending nightmare!

Our first scenario takes place in Lindisfarne, 887 AD. The harbinger star looms over the abbey, in which the twisted bones of a former Peng-possessed saint lie and unfortunately for everyone involved, dark magic has taken over the cloister. The Vikings who were in the process of raiding the place did certainly not expect the red rain of blood, rising tide or dark magic of Peng and thus, 2 monks and 2 Vikings are sent to find the reason and put an end to Peng’s dread sorcery. The initial constructed mistrust between the characters makes for a great way to encourage roleplaying and 2 handouts sum up what the respective characters know – this set-up, while potentially problematic, works only to unite the characters, though, as soon visions of past lives (5 are provided) and with it, the Incarnum skill slowly surface and forge them into a team while the apocalypse seems to loom. In order to stop Peng, they’ll have to infiltrate the abbey, push blindly past corpse spiders (hideous amalgams of dead bodies who can only see what sees them) and finally stop Peng by breaking through his magical defences. This climax sets a precedent for the whole anthology – while many Cthulhu-scenarios focus on investigation and offer a climactic show-down in the end, in this anthology, the stretch from investigation to full-blown, almost survival-horroresque escalation is a short one and while not common, it does work here – after all, if the Investigators die, not much is lost, thus encouraging players to go for the blaze of glory/gibbering, homicidal insanity approach.

The second scenario, 1287 AD, takes place in the Kamakura era in Japan. The land is still suffering from the repercussions of averting Mongol invasions and one particular, isolated mountain village alone, Iwazumi, always manages to pay its tribute. 6 visions, a summary of what the investigators know (including glossary), 3 hand-outs notes, 3 new creatures and 4 new spells (mostly for the bad guys) are included. Sent to investigate by the authorities, the investigators will reach the village after an encounter with a servitor-race creature only to find a massive problem for their investigation: The people are mute. All of them. Thus, the investigation will mostly work via written notes, perhaps even improvised gestures and a wall of silence literally blocks the investigators in the beginning – until they hear a newborn’s scream, which cues them, hopefully, that the local Kami is not all it seems and takes the voices – to put them into voice-boxes. When Peng attacks the village with a flock of disturbing bird-like servitors, the Investigators will have to save people, hunt the sorcerer…and find that the Kami is in fact a Denizen of Leng who has already taken care of Peng’s latest incarnation and seeks to undo Azathoth’s lullaby via the thousands of stolen voices. It’s up to the PCs to stop this via any means necessary and hopefully thwart the plans of the now-revealed second faction of masterminds involved in this deadly game of chess.

The third scenario, 1487 AD hits the town of Valencia in Spain rather unexpected: The Spanish inquisition has taken the town under the leadership of the charismatic Esteban del Cassandro, divine saviour of the town, guarded by angels made flesh…and latest incarnation of Lei Peng. To make matters truly worse, the angels are Byakhee in disguise and he has already rounded up Muslims, Jews and anyone else who might make for a good scapegoat and seeks to have them all purified by fire in the morning. The scenario kicks off without any of the investigators knowing which of the other inmates subjected to torture actually are investigators and after a gruelling torture session potentially characterized by forced confessions and blaming of others, the players will find their latest incarnations confined to the city dungeon. This time, things are a bit different, though: We get 7 different handouts, 3 additional ones that help the players get used to the era and 5 different visions. The new characters are more experienced and some of them even know spells. And they will need them, for this particular scenario is HARD. Not only will they have to escape the prison, they will also have to navigate the streets of Valencia under the watchful gaze of the “angels” and mobs routing up people to be burnt – in order to stop the madness of a pogrom, the investigators will have to unearth how Peng controls the angels and expose/assassinate him in front of the whole town while exposing that he’s not who he claims to be – otherwise, Peng’s death will do nothing to spread to impending carnage and the fires of hatred will indeed defile the skies…

The fourth scenario, 1587 AD, is rather tame in comparison, but no less compelling – the investigators are colonists and have purchased their tickets toward a new life in the new world – they’re set out for Roanoke! We again, get 5 visions as well as a handout. With regards to the scenarios in this anthology, this one is rather tame, but things can be deceiving. Once the investigators have taken care of their business in the old world and survived the perilous journey to America, they’ll settle in the abandoned colony and try to establish contact with the natives to find out what exactly has befallen their predecessors – hopefully without opening hostilities with the natives. Peng’s latest incognito tries to incite and escalate the dealings with the natives, but is soon stopped short in his tracks by being killed off alongside other people missing. Tensions are running high on the side of both settlers and natives and existential anxieties threaten along-side maddening drums from the woods the existence of the whole settlement. Hopefully, the PCs dealing with the natives keep a cool head and find the remnants of failed Leng possession (flawed copies of Peng’s sphere) devices along the remains of the former colonists. If they fail to stop the denizen that has taken the shape of an evil tribal spirit, the Denizens will complete their duplicate spheres and condemn the world to eventually becoming their decadent playing ground of self-destructive urges…and that’s not even the finale!

The final adventure, 1887 AD, takes place in Desperation, Arizona and includes wild west gun-fighting rules, 4 new spells, 2 new creatures, 3 visions and a whopping 11 pages of handouts – which is plain awesome in itself. The mining town of desperation has been beset by sandstorms and cut off from outside influences – even worse, Peng has finally had enough of the investigator’s meddling and located them prior to them awakening to their nature. He also dealt with them. Permanently. All is lost. Well. Not really. A gallows in the desert suddenly sees the corpses coming to choking life – without any memories and still mostly mummified by the scorching heat, corpses spring the life, clotted blood starts to slowly unclot itself and half-undead gunslingers shamble back towards desperation in order to reclaim their identities and stop the apocalypse the mad sorcerer with the shown eyelids seeks to bring down upon earth. Even with the benefits of six-shooters and their excellent gun slinging-skills, these individuals will be hard-pressed, for Peng’s grip on Desperation is tight – controlling the food supply of the town, he has fed the town human flesh and is on the verge of having the town consume itself in a homicidal, cannibalistic fury. Even though the investigators are half-undead (though slowly returning to life), proficient in some spells and have a lot of skill on their side, Peng has stacked the odds against them: A conjured azagoth guards his codex, undead wendigo (and a lot of them!) servitors have taken over all positions of power and with a town teetering on the brink of madness, investigating when the whole town knows you’re supposed to be dead and without knowing who you are tends to be rather difficult. Worse, this is their last incarnation, the last chance for the wayward souls to stop Peng – their incarnations are at an end and the demon-sultan looms. Hopefully, they have succeeded in some of the other adventures and pierced together enough of Peng’s M.O. to get rid of him permanently and seal Azathoth in a showdown of cataclysmic proportions. Even if they succeed, though, their victory may prove to be bitter-sweet if they botches the Roanoke-scenario – the hottest goods out there are these intricate brass spheres…

Editing and formatting are very good, I only noticed 3 glitches, and all were punctuation glitches. Layout adheres to a beautiful 2-column standard and the pdf comes fully bookmarked. The pdf is full color, though the softcover (no longer available) is b/w. The artworks consist of a mélange of period piece stock-art, original drawings and beautiful maps and handouts. This anthology is wholly different from anything I’ve ever played in CoC – chock-full of interesting mechanics and apocalyptic scenarios, the anthology may fall a bit flat on the investigation side of things, something purists should be aware of. However, the time-period-spanning sequence of scenarios and the non-traditional, episodic narrative structure make up for that in presenting you a tour de force of escalating nightmares, oppressive doomsday scenarios and disturbing allotopias, with each scenario featuring some kind of special set-up for roleplaying or some complications – this still is CoC, after all and whoever thinks that unfocused violence will solve anything will be squashed. Brains over brawns – even though this anthology feels more like a action-horror offering than a murder mystery. If you’re looking for something different or want to show players of more combat-oriented rpgs how awesome CoC can be, this should be considered your anthology of choice. My final verdict will be 5 stars + Endzeitgeist seal of approval.

Red Eye of Azathoth is available from: