This pdf from Open Designis 10 pages long, 1 page front cover, 1 page editorial, 1 page advertisement/SRD, 1 page back cover, leaving us with a total of 6 pages of content, so let’s take a look!

Following the format of the monsters of sin-series, we start the issue with a short discussion on the nature of sloth as well as a quick template to create slothful creatures (reducing the CR, actually) before we delve into the new beasties herein.

The CR 4 Flab Giant is a disgusting, lumbering being that can’t run or take five foot steps, but it can actually sit down on you, crushing you with its inaction and pin you with one combat manoeuvre-check. Nice!

The CR 6 Scrap Drake is usually a sluggish, constantly sleeping drake that makes for an ideal guardian – woe to those disturbing it, though: Their bursts of speed make them temporarily VERY fast and agile and the creature also has a cool breath weapon that consists of shoving debris in its mouth and spewing the splinters/dirt/whatever at its foes. Cool!

At CR 15, the Slow Storm makes for a truly weird being: Surrounded by wisps of humid wind, these strange spiny balls can not only cast some lightning-based spells, they can also cause arthritic pains that make you regret every action, since you take damage for non-purely mental exertions. I would have loved a slowing aura or the like, though.

The final new creature herein, as with every Monsters of Sin-book, is the Embodiment of the respective sin – in the case of sloth, a CR 17 unmoving blob of flesh sans features. It’s vast telepathic range of over 2000 miles enables it to recruit powerful followers to fall prey to its aura of slothfulness, that can sustain its followers in their inactivity, but also adds the slothful creature template to them. It should be noted that the embodiment can exempt people from its dread aura to grant them a temporary motivation and respite from the languishing existence at the non-existent feet of this mound of inactivity. The embodiment is cool, though I feel it could have used some additional defences against threats – as written, it’s quite proverbially a barn that behaves like a sitting duck – a DR or a sluggishness when hitting it as an additional form of defence would have been nice.

As always with the series, the installment closes with a section on tales of the deadly sin in the Midgard campaign setting.

Editing and formatting are top-notch, I didn’t notice any glitches. Layout adheres to a beautiful 2-column standard with red highlights and the b/w-artworks are awesome. The pdf has no bookmarks, which is a bummer, even at the short length. Sloth – The Death of potential is perhaps my most hated of the deadly sins, representing one of the most devious sicknesses that can befall the human mind and spirit. It’s also probably rules-wise one of the most interesting ones, since being inactive usually is not THAT dangerous. I expected lost actions, slow foes etc. and the pdf delivered. While I still maintain that the embodiment is a tad bit weak and that the slow storm could have used a slight bit more variety regarding its spell-selection. Nevertheless, though, this is one of the installments of the series that nails the essence of the sin and thus, I’ll settle for a final verdict of 4.5 stars, rounded up to 5 for the purpose of this platform.

Monsters of Sin 6: Sloth is available from: 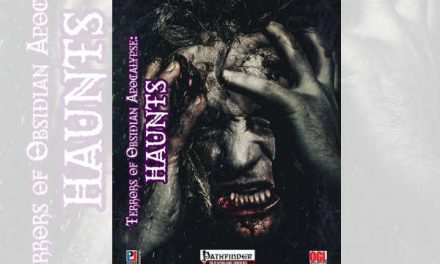