Kingdoms of Legend: The Elusive Foe

This second part of the Relics of the Old Gods adventure trilogy from Interaction Point Games is 36 pages long, 1 page front cover, 1 page editorial/ToC, 2 pages back cover, 1 page SRD and 1 page advertisement, leaving 30 pages of content, so let’s check it out.

The Kingdoms of Legend are Interaction Point Games’ setting, which is loosely based on our own world. The first adventure had the PCs explore a dungeon and thwart a plan which would have proven to be quite problematic for Turnberry castle. This being the second part of a trilogy, it can be played as a stand-alone or as a sequel, but in contrast to other adventures, separate angles and boxed texts are provided for both approaches. While this is in and of itself positive, it also means that there’s a lot of space that’s eaten up by this dual approach.

We re-join our PCs as they revel in their feast or stumble into an assassination attempt and, this being an adventure-review, from here on

The PC’s feats is interrupted when some dastardly rogues from an evil thieves’ guild infiltrate the castle and kill one of their own who got caught to silence him. If run as a stand-alone, they’ll be escaping from an assassination attempt. Via afire-based diversion (burning stables), they accomplish their deed and henceforth escape from the castle compound to the village, the PCs supposedly in hot pursuit until they are delayed enough by one of the encounters for at least some of the rogues to escape. The rest of the adventure sees the PCs on an overland chase through the woods, trying to avoid false trails, resident trolls, killing a direwolf and in the coastal region giant crabs and even a sea hag before finally finding the vessel that sports the foes trying to escape. When that does not seem possible, one of them tries to blow up said vessel.

The battle against the crew is handled via IPG’s crew-rules, essentially making them a kind of swarm – interesting! I guess I’ll have to check out their take on marine combat, as I’m currently still using my own adaption of Mongoose Publishing’s “Seas of Blood”.

In any way, the PCs will get a map to a base of the assassin’s organization and hopefully end the threat this marsh-based camp offers. This will not be easy, though, as the grandmaster of the camp is quite high-level and has a wood golem, making for a memorable final fight. Ouch!

It should be noted that the pdf also 4 pages of campaign setting information.

In my review of this adventure’s prequel, “The Hidden Threat”, I complained about there being not enough special stuff going on. This adventure is a tour-de-force, having the PCs hard on the trails of their foes and hopefully conserving resources – for this adventure is hard and the encounters provided are nothing to be trifled with. The scene where the foes try to blow up the ship is narrative gold and has the enemies act smart – nice!

Editing and formatting are top-notch, I didn’t notice any glitches and layout adheres to the 2-column standard. The pdf is extensively bookmarked and the b/w-artworks are nice and the 1 page of beautiful maps by Jonathan Roberts is awesome – or would be, were it not for those damn numbers, which show the stations of the chase and make showing the map to the players impossible. I hate numbers in my maps.

The writing is once again concise, but there are some problems here: Due to the dual approach, the raw content you’ll use is less than otherwise and while I’d usually refrain from complaining about such an approach, it’s clear that the adventure has some space-issues, namely the overland chase that unfortunately makes up about 70% of the adventure: While a sidebox explains that no DCs/travelling times etc. have been provided because the author does not consider them fun and I tend to agree that an adventure should not get swamped in them, there’s a problem resulting from this: The PCs can’t really catch up with the foes, nor easily lose them.

As written, there’s no sense of urgency apart from what the DM can impart and there are no consequences for the PCs depleting their resources to act fast as opposed to playing it safe – I’m sorry, but to me that’s bad design. Had I written this for my home campaign, I would have handwaved whether they succeed in the chase, but at least provided some consequences for losing the query, taking too long etc. In a commercial adventure, though, I absolutely WANT these crunchy bits done for me. I don’t need an overblown alternate adventure-hook that eats up tremendous amounts of space, I want uncomfortable stuff like calculating overland movement etc. done for me.

Additionally, the PCs WILL feel railroaded by some of the encounters – being delayed by the town guard is just a bad idea and nothing e.g. a sleep spell can’t take care of. The town and castle still have no map, which makes picturing and running the first part of the chase harder than it should – at least some rudimentary information would have been appropriate to facilitate running the encounters and providing some context. As written, they suffer from amorphous-blob-landscape-syndrome.

Once again, this is a painful adventure for me to rate: It reads like an exciting idea and author Brent Evanger knows how to handle intelligent foes and the basic idea is exciting. The mechanic execution, though, is rather poor and lacking in the central mechanics of an overland chase, especially prevalent due to the immediate pursuit the PCs give – if the foes had some days on the PCs, the problem would be less pronounced, but as written, I know that my PCs would have the foes even before they managed to escape from the castle. The castle is too sparse in its details for the escape plan to provide for a believable or reliable distraction of the PCs. The finale, though, is cool and challenging.

Once again, I did like the adventure, but while this one left me more impressed than its predecessor, it makes several grievous design errors which, hamper the overall experience. In the end, once again, there are many better adventures out there and I hope for part 3 of the trilogy to elevate the setting up the first two parts did. As written, my final verdict for part 2 will be 2.5 stars, rounded down to 2 for the purpose of this platform.

Kingdoms of Legend: The Elusive Foe is available from: 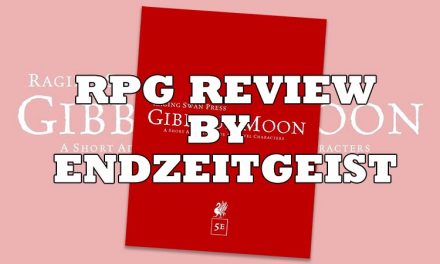 RPG Review – Into The Breach: The Oracle