This pdf from Louis Porter Design is 15 pages long, 1 page front cover, 1 page SRD, 1 page mini-sheets for monsters, 2 pages NeoExodus char-sheet, 1 page of advertisement and 1 page combat & initiative tracker, leaving 8 pages for the dark legend of Widowmaker Scarlet, so let’s check out whether she holds up to her dread moniker.

What is the widowmaker, then? From the stunning cover-image, I’d gather she is an extremely powerful Khaynite, one of the flesh-twisting first ones modelled somewhat in alignment with Hellraiser’s Cenobites. As always with the First Ones, I’d be both wrong and/or right, but more on that later.

To put it bluntly, Widowmaker Scarlet is one of the major antagonists of the NeoExodus-setting, a legendary bogeywoman for both First Ones and surface-dwelling races, a dread manipulator shrouded in mystery. Subsequently we are not introduced to one definite history of her, but rather a collection of historical accounts she might have influenced, once again using the rather ingenious approach used in the book on the First Ones for good effect. Scarlet being a dread creature even the First Ones fear, there seems to be a lot of misinformation and misconception, dread and fear regarding her person and subsequently, a significant section of her fluff centres around the different heretical and competing theories regarding her nature. In spite of what I first considered to be an approach prone to rather boring generalizations, I really like the plurality of possibilities that stem from these theories and I can see a campaign centring about PCs freeing or press-ganging heretics and scholars to learn about their nemesis. Aptly done!

Three sample statblocks are given in the tradition of similar books like RiP’s FoTS-series. In contrast to e.g. Brelin Swift, LPJr Design has taken care to once again (like in the EXCELLENT Folding Circle) create statblocks that are, while not as complex as in the FoTS-series, still sufficiently complex to make them interesting. The innovative aspect of this villain, though, is that while all statblocks that are given belong to the upper scale of levels (CR 15, CR 18 and CR 20), each one presumes another kind of Scarlet: From a possessing ghost, to an aberrant sorceress to a unique demon, all 3 are interesting builds and feature sufficient signature abilities to make them interesting in their own rights.

4 extremely rare spells centring on possession (of even First Ones) and converting people to the worship of Khayne as well as the stats for the legendary blade Singiver are also provided. Have I mentioned that there’s a theory that the sword is the true Widowmaker? Never trust any accounts of the First Ones…

Editing is top-notch, I didn’t notice any glitches, layout adheres to the beautiful full-colour two-column standard we’ve come to expect from LPJr Design. Formatting is good, although I noticed one particular problem: Some of the spells and feats herein are taken from e.g. the book on the First Ones and are referred by asterisks. While e.g. feats are explained, the new spells in this pdf are also marked by said asterisk. When running an encounter, this makes handling her slightly more complex than necessary. On the design-side, I think that the aberrant witch-version would have worked better as the witch base-class with a new patron (like Khayne) instead of aberrant blood-lined sorceress. The final incarnation of her as a demon is a bit too straight-forward in her rather limited spell-like ability selection for my taste. Clocking in at “only” CR 20 also felt a bit off in this incarnation, as did for me the fact that her legendary sword is a rather bland accumulation of weapon qualities. Some unique abilities, a lore-section on the well-known sword etc. would have gone a long way to improve this particular weapon. On the other hand, this pdf is rather cheap and offers interesting statblocks for the villain. All in all, though, I feel that Scarlet has much more potential than is realized herein and that the certain additional spark of brilliance is there, but only as an ember. In contrast to e.g. the Chanting Queen and the Annihilation Sphere, I’m also not that impressed by the niche in high-level enemies she occupies – a tighter focus on e.g. possession in the respective incarnations might have made her more interesting. She’s also not much more powerful than said other major players/creatures, so I’m not entirely sure whether her reputation in the setting is justified. However, these very nit-picky gripes make up my major points of criticism.

Subsequently, I’ll settle for a final verdict of 4 stars.

Enemies of NeoExodus–Widowmaker Scarlet is available from: 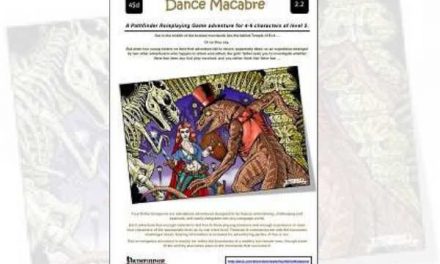