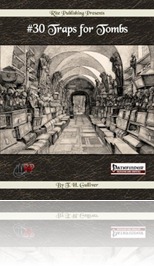 This pdf from Rite Publishing is 19 pages long, 1 page front cover, 1 page editorial, 1 page SRD, 2 pages of advertisements, leaving 14 pages of content, so let’s check the latest instalment of the #30-series out!

As we’re used to by now, the pdf kicks off with an aptly-written IC-introduction to the matter at hand and sets the traps located herein at the optional backdrop of Rakifabeer, the main necropolis of the land of tombs and manages to actually sketch an interesting civilization and backdrop in a single page – a commendable example of concise writing! Moreover, the designer’s short commentary informs us that we actually get 55 traps instead of 30 – more than our poor PCs bargained for. Even better, though, several are combined into trap encounters, making a case for the complex traps I love so much. But onwards to the traps – will they stand up to the excellent “Art of Traps” by Necromancers of the Northwest?

The first thing you’ll notice when delving into the traps is, that they are not simply an assortment of traps (though they can be used as such), but actually work as a kind of gazetteer of the necropolis, including details like victims of polymorph traps etc., which subsequently evokes a rather gazetteer-like feeling that goes far beyond a dry crunch-book and is even reminiscent of a sketch for a trap-focused adventure – Neat! This flair is further enhanced by providing e.g. a simple, grid-map for the “Tombs of Tamar”, including A LOT of information to give the PCs hints of what to expect via linguistics and smart thinking. The traps linked to a Tamar king’s tomb are especially devious, well-placed and cool and come with another map.

But don’t be concerned, even the regular traps we get, are imaginative: Picture a room with a floor that tilts into the corner where the most weight lies, add two swinging deadly scythes to separate the room into quarters and you get a nice example of an easy to implement trap, that is just plain cool in its rather simple, yet iconic deviousness. Of course, the indy-trap, aka the rolling boulder had to get its representation, too and I actually prefer this one to NWN’s take on the trap, probably also due to there being a nice side-view of the traps make-up and the nice stumble-traps. No, that’s actually not it, rather it’s the addition of a reverse gravity for maximum pain n the PC’s part. And the alternative of a rolling ball of water. Water? Yep, and no the PCs are not supposed to drown. After all, there are those cute shocker lizards…

That’s what I’m talking about, it’s this kind of inventiveness that makes the distinction between good and awesome. Speaking of drowning: Combine magnets and water for a happy drowning and if that’s not enough, add one of the party-separation traps for even more fun. If you’re sadistically inclined (like I am), there’s also a downright cruel and evil trap that made me chuckle with glee: Teleport into a sarcophagus and transformation into a mummy – scream, PCs, scream! *Muahahaha* That are the small and “simple” traps. Yep. I was wide-eyed when I read that, too. The Necromancer’s chessboard (again, with a schematic depiction), makes for a cool idea and the pit-traps that conclude the pdf make for a nice addition to the file. While at first I wasn’t too excited about them, due to their proximity in the file, I realized that they could easily be stacked for deadly effects and the “Ahhh-owww-ahhh-ow-ahhh-owwww-etc.”-factor.

The pdf is extensively bookmarked and I noticed no editing or formatting glitches bar one: In the designer’s commentary, the pdf is referred to by its work-in-progress title “tricky traps”. That’s it and definitely nothing that could be considered a justification for detracting a star. Layout adheres to the new two-column-RiP-standard and artwork is b/w stock-art, but beautiful and very flavourful one. Indeed, I can’t bring myself to saying anything negative about this file – it’s a joy to read (in contrast to most crunch-heavy books), is easily integrated into any setting/dungeon, could stand alone as an adventure-locale/mini-gazetteer and would e.g. make for a great expansion of modules like “Pact-stone Pyramid” or the legendary “Necropolis” by Gary Gygax (R.I.P.), one of my favourite adventures of all time.

A crunch-heavy book full of imaginative traps, a practically complete trap-based adventure-sketch, an iconic flair and traps that truly deserve the moniker “imaginative” – Could one want for more? Yes, I missed one thing and have to admit that, while NNW’s “Art of Traps” has to admit defeat on all other levels, there is no complex puzzle-trap in here that necessitates the players thinking outside the box/logical and the complex traps from NNW’s book are just a joy to behold. In all other regards, though, #30 Traps for Tombs is just stellar and offers more content than promised – a lot more. It was not necessarily the additional crunch, but the stellar, captivating presentation and fluff that made this book a true blast to read and sparked off some truly insidious ideas in the twisted mind of yours truly –With all the praise I’ve heaped on this book, you might imagine what my final verdict will be: 5 stars and the Endzeitgeist-seal of approval. If you even have the slightest soft spot for traps, go check this out – the low price nearly forces your hand to do so. In fact, check it out even if you don’t like traps or trap-books: It might sway you!

Secret Societies of NeoExodus–Section Omega is available from: