Those of you who have read my review of the base game are by now more than aware that it is one of my favourite games, so when an expansion was announced it was a slam for me. This expansion brings the galactic orders that we had seen on the prestige cards in the base games, to new heights as you vie for influence with these powerful institutions.
Upon opening the box I was instantly reminded of opening the base game but this time at least I was prepared to doubt it on sight. This is again, a big box with a lot of empty space, some cards, a beautifully executed rule book and this time many more boards of chits. The major components this expansion adds are the six boards for the Galactic Orders and this time they are boards and this is a much appreciated investment in the production, compared to the thin card of the player boards in the base game. The cards are as ever well laid out and stunning, I really don’t know what more to say other than if you liked the standard of the art in the base game the new cards live up to that high standard. The box is vast but with good reason. This is the storage solution that the expansion and the base game need. Now there is space for the cards to be sorted (goodbye to that land of a dozen baggies for them) and space for the player boards to lie flat, which is massive progress from the base games insert. It also allows space for the Galactic Order cards and chits as well as space for more expansions.

Set up for this expansion is the base game with the significant change that now each player gets a pile of influence counters with their faction’s icon on them. The six Order boards are placed to the side of the play area. The new cards are also shuffled into their relevant sector decks and you now have an additional faction deck to play with (seriously nice hero that lets you draw more cards). This additional deck doesn’t however allow the game to be played with more players. Players also get new starting worlds with an additional power, now during the draw phase if you control more worlds than you have units deployed in your warzone you may draw an additional card. Next to your starting world you play a capital city card, this allows you to remove any card from your hand from play during the energy phase. This at last allows you to remove tactics cards from your deck and to speed up removing the basic units if you choose to. Finally the starting event “First Blood” is set out too.

The Galactic Orders each have their own powerful effect that players can call upon if they have influence with that order. Influence is gained when you play cards with that orders symbol on them. This is a great touch as all of the non-planet sector cards from the base game already had these icons so it’s not just the nearly one hundred cards from the expansion that allow you to gain influence. Whenever you deploy a unit or play a tactics card that has an order symbol you place one of your counters on that order’s card. This can easily make cards that before you wouldn’t have thought about drafting more attractive purely for the influence. Not only can you gain powerful effects from an Order, but also new cards are available which increase in power if you have influence with a specific order. Now that you have influence, what can you gain by removing those counters? Well if you have influence with the Mining Coalition you can remove a counter to gain two energy. Influence with the Galactic Senate will allow you gain an action. The Science Guild will allow you to draft a card for three energy less than its usual cost. Merchant alliance will let you deploy units for three less energy. The last two are personal favourites of mine: Order of the Knighthood lets you remove counters to add either two fleet strength or two ground strength to an invasion (I don’t know when or where but I am looking forward to conquering a core world with a single Galactic Grunt). Finally there is the Mystic Brotherhood which is simply explosive in the early rounds, remove a counter to draw three more cards. These powers are all hugely useful and where you aren’t giving up anything to gain this influence and its happening as part of the base game, its doesn’t interfere with the game play of the original game. There are however, a few reasons to hold back from spending those precious influence counters firstly is the fact that at the end of the game the player with the most influence with each order get as many points as they have influence, the second most influential player get half their influence in points.

In addition to the Galactic Order related cards there is another type of card that has been added to the game. These are the purple bordered event cards. Now, in every round of the game there will be an event effect that happens. In the early sector decks these are beneficial and in the later sectors they tend to be detrimental (that said they can still benefit some players depending on their effect). If one of these is drawn during

the galactic phase it is set aside and that event takes place for the next round. If more than one event is drawn the last card to be drawn is the event which takes place. If no new event was drawn this round then the event for the last round continues. These events help to balance out some of the advantage gained from the influence counters. We have a new Core World (Raven) as well, which allows the player conquering (and his Consul if you are playing that variant) to score four plus the number of influence you have on any one Order in empire points.

This expansion had a lot to live up to with me as the base game is as near to perfect as you get in my mind. The expansion has lived up to this what it adds to the game feels like it could always have been there. It has not changed the feel of the game and the additional choices it gives are so akin to those I loved in the base game. I feared that all of these additional advantages from the orders would unbalance the game or reduce the challenge and it just doesn’t. The event cards add flavour and at worst light irritation when one goes on round after round but they aren’t a detriment to enjoying the game. I feel this expansion, as much as the base game has been very carefully balanced with the Consul variant to help balance the base game and the expansions own official variant, Monarchs Revenge. This coupled with the fact that two of the base game cards got revised versions for use when playing with this expansion, shows a clear dedication towards giving the best play experience to its players. I continue to love this game and I doubt I will ever feel the urge to play the base game without this expansion again, it fits so well and plays so intuitively. If you like the base game I can’t recommend this expansion enough and I will dare to hope that the recently announced work on another expansion is as much of a success.
Mav. 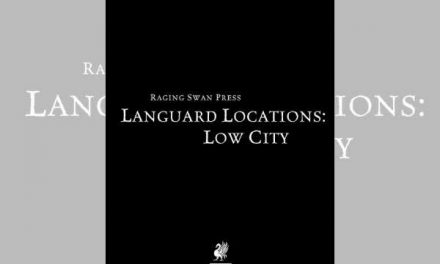 Duergar of the Obsidian Citadel