TIME Stories is a time traveling adventure fully cooperative board game for up to four players that tells an adventure as the players struggle to keep rounds to a minimum and use time as best they can.

Designed by Peggy Chassenet and Manuel Rozoy, this clever and rather gorgeous game uses extremely simple mechanics to develop a game that will have you hooked within minutes and make you want to play more and more.

The first thing that catches the eye of this game is the production. The box has an incredibly elegant cover with the right illustration and the logo of the game that, somehow and despite its simplicity (or perhaps because of it) sparks curiosity.

Perhaps because just the name of the game is evocative enough. After all, who doesn’t like the idea of stories that involve time travel?

Inside the game doesn’t disappoint. A large board that continues with the minimalist design from the cover gives the spaces where the cards and tokens will be placed and moved throughout the game.

The insert is probably the best I have ever seen. The right amount of space for everything the game comes with, but also designed in a way that will allow you to arrange the components so you can get back to the game and take off from where you left. The importance of this will become obvious a bit later when I explain how the game plays.

The tarot sized cards, used to create the locations and maps where the play will take place, as well as the events and objects that the players will have to deal with and use to overcome challenges are nothing short of glorious. All of them are illustrated truly beautifully with very evocative depictions of the locations, as well as detailed illustrations of objects. The anatomy of the cards has also been well looked after with both icons and text clear in the right places.

The tokens used in the game are pretty standard. From the materials point of view there is nothing amazing about them. The iconography is very clear and although it doesn’t seem to have any relevance to the situations, for example obtaining a token with four grey squares in order to be able to access certain card, it doesn’t break the illusion the rest of the aesthetics provide.

Dice are wooden dice with engraved icons. The wood goes very well with the player tokens and having them engraved is indeed a good thing.

Then we have some cylinders and some stickers to attach to them. This was the only aspect of the production that got me by surprise. It felt a bit too cheap compared to the rest of the game. Of course it is a means to save some money, and, in any event, once the game is going, they do not detract from it. In fact the white colour with the coloured side really look very good on the board.

Gameplay is a lot simpler than it would appear. By reading the rules. Although the rules have been very well laid out and, like everything else, look gorgeous, they feel like too many for the simplicity that follows when one plays the game.

At the start of the game, a number of cards are laid down on the board and a token is placed on the track that measures how much time we have to complete our mission. The cards laid on the board will form the image of the location where we, as characters in the game, are meant to be.

From that moment on, things only look up.

Once we are initiated in the time travelling experience, we are sent to our location and we must choose from a series of characters, each one with their own abilities, to perform the tasks ahead.

Revealing any of them could potentially ruin the game, so I will refrain from posting spoilers.

The characters will go from card to card, revealing what happens in that particular spot. The cards will reveal new locations for the players to travel to and explore, as well as challenges, like fights or battle of wills, that will be resolved with the dice in opposed rolls.

As the players take their actions and agree what locations to visit or actions to perform, the time counter moves down until it reaches zero. When that happens, that chapter has ended and the game must restart.

This is the tricky bit for the game… it is very limited in its replayability. Because the story has been laid before you even start to play, you may revisit the locations, but you will know what is going to happen in them, so you will know what to avoid or what to expect. That is not too bad as long as you keep discovering new things, but eventually, after maybe 10 games, it will wear off.

Luckily there are some expansions to keep the game going, so it can go on.

To give this game some sort of comparative, it is like an old game-book or a point and click adventure on a board.

The old “turn to page so-and-so when you find such-and-such” or “click here, and then fight the guard to get the key that will take you to the room to the right” sort of environment is totally perfect.

The thing is that we have to get used to the idea that this game has a finite life span. Much like a videogame would have, but with more people enjoying it at the same time. I understand that is not something a lot of people are comfortable with, but I am quite happy with it because the quality of the experience I am getting is truly superb.

Any game that leaves me and my group wanting to continue with the adventure to know what is going on must be a good game.

And the story is gripping. The right combination and balance of exploration, surprises, creatures and a fantastic selection of characters… and with the visuals to really drive you in, I would gladly see it turned into a TV series!

If you are a role player and want a game that will help you introduce people into it, or you used to love point and click adventures, you really can’t go wrong with this game. Just get used to the idea that you will need to get some expansions in the future, though.

Buy this game if you want:

Don’t buy this game if you want: 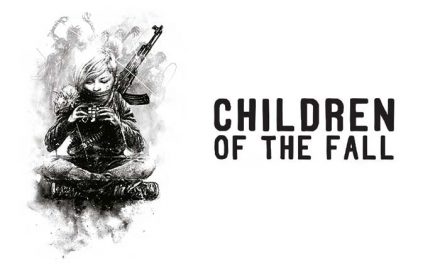 Children of the Fall with Gareth H. Graham

The Virtuous and the Vile: Morithal, Lord of Unceasing Hunger