So what? Dear some straight gamer 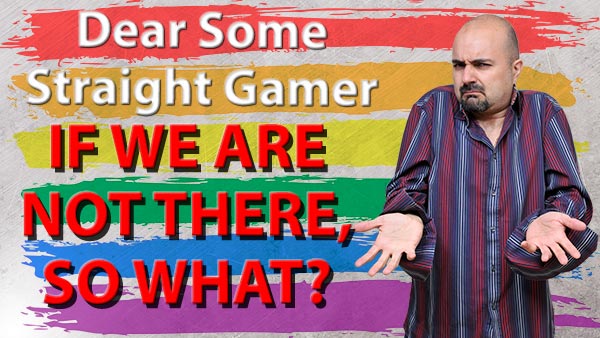 “So what?” has been a question someone posted in a video comment recently. If there are no LGBTQI characters in a game setting, so what? Well… here is what.

Asking a LGBTQI “so what?” is always going to elicit some mixed – likely really bad – feelings. You are asking us why should it matter if we are not there, and some people will take that worse than others.

In this video I go a bit more in depth on the topic and explain what happened when my niece saw Princess Glimmer from the new She-Ra series.

But the point is that we have been erased so much, that the “so what?” in reality is hiding the fact that erasing us is a very well known and widely-used technique to take us away and make it as if we don’t even exist. We are nowhere to be seen. Hollywood did that for decades in films. The USA Army has done that until recently.

And that matters a lot because it stops LGBTQI+ from being normalised.

Having characters of a diverse sexual orientation in a game setting might not be an issue to someone who is always able to see themselves as the norm and “normal” pretty much anywhere, but when one can’t see oneself… we miss it. And some people need it.

Regardless of how open minded we are, there are parts of the world where LGBTQI are treated really badly. And I don’t mean extreme countries where people are murdered simply for loving someone else, but countries where one can be fired for loving another person. Or denied service. Or be insulted and attacked. Or…

That still happens and having a bit of everyone, everything, everywhere means that everyone starts to see it as normal, which it is.

In this video I go a bit more in depth on the topic and explain what happened when my niece saw Princess Glimmer from the new She-Ra series.

I hope you enjoy it.