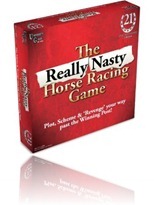 By Paco Garcia Jaen I wasn't too sure as to what to expect from this game when I received it. I haven't really played that many racing games, but this one, when it was offered caught my eye. Being re-launched for its 21st anniversary, the box is heavy and the game sounds fun, … END_OF_DOCUMENT_TOKEN_TO_BE_REPLACED