By Shorty Monster Before I start, I just have to say, I love me some Blood Bowl! I've been a fan since I was a teenager and still have the same set that I bought back then. I'm going to show my age a little here, but not in old way and say I just missed out on the kick ass … END_OF_DOCUMENT_TOKEN_TO_BE_REPLACED

By Peter Ruth II Unlike Walter Koenig's Accent, This Game Isn't Imitation Adventure I don't hate to be wrong, but I really hate to be wrong like this. I broke my own rules, which was stupid in and of itself, and I deserve the outrage that I will be receiving from people who … END_OF_DOCUMENT_TOKEN_TO_BE_REPLACED 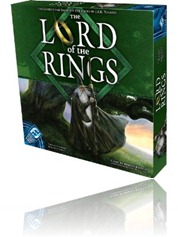 Evil is stirring again in the black lands of Mordor. Brave heroes are needed to stand against the terrible might of Sauron, and the time for action is nearly at hand. The fate of all Middle-earth rests on the shoulders of a brave Fellowship of hobbits... The new Silver Line … END_OF_DOCUMENT_TOKEN_TO_BE_REPLACED