Troglodytes of the Tentacled One

Troglodytes of the Tentacled One is written in the Lovecraftian style of elder horrors lurking beyond the light of civilisation in the dark, wild places of the world.

Publisher’s blurb: “In the dark, wild places far below the wave-flecked flanks of a forlorn, wave-lashed island lurk the degenerate troglodytes of the Tentacled One. Dwelling amid the tumbled cyclopean ruins of a forgotten epoch, the troglodytes toil in their labyrinthine, stench-filled caverns at the behest of their bloated, tentacled master. Emerging on fog-shrouded nights when a sullen, gibbous moon hangs low in the sky the troglodytes raise their croaking voices to the ebon heavens in terrible, half-forgotten rites of veneration to unknown, elder beings.”

The first thing, after Raging Swan’s usual boiler-plate, is a very comprehensive – and hyperlinked – Contents page. Wish everyone was as meticulous in setting up their PDFs. As a bonus, a bit of leftover space is filled with a poem about this bunch of troglodytes, naturally this has been committed to my bardic memory forthwith!

Troglodytes are primitive folk by definition, but this tribe are more so than most. They are held in thrall by an aboleth who has convinced them that he is the very embodiment of the evil deity – a tentacled demon – that these ignorant and superstitious troglodytes worship. They live deep under a remote rocky island off the shore of the Lonely Coast (or, of course, any suitable shore in the campaign world of your choice), venturing out on rare nights to practise strange rituals. The rest of the time they dwell in a vast underground city built in ancient times by, well, they certainly don’t know. They fight ferociously if you intrude there, although as to do so you have to get through narrow, dank and tricky passages and tunnels it’s difficult to imagine just why you would!

After the troglodyte society, customs and home have been described in evocative detail, on to a collection of feats, mostly combat-related, and some cleric spells used by this tribe. Mind you, the Cavern Stride feat would be of use to anyone who likes going spelunking in the course of their adventuring, troglodyte or not. The spells include some which allow the caster to age his target prematurely for the spell’s duration, an unusual combat tactic! Making magic items is far beyond these sorry creatures, but they have found a few interesting ones which are detailed next, being used as badges of office by the tribe’s leaders.

Next come some encounter ideas. You might be unlucky enough to meet them on one of the rare occasions that they come above ground to look for food or sacrifices, or while you are exploring underground. Or you might be really unlucky and encounter their aboleth master. He’s CR 9, so you’d better be good or you will soon be dead. There is plenty of detail on both him and his troglodyte minions, far more than mere stat blocks alone, to aid you in running any encounters. The work ends with a new template, the degenerate creature, which allows you to portray the decaying remains of any race.

While these creatures and their home are well-detailed and presented clearly so that they would be easy to run, there is no real reason for anyone to want to go and visit them… and they do not venture far even when looking for surface dwellers to sacrifice or eat. But if your characters do encounter them, a memorable meeting it will be!

You can buy this from: 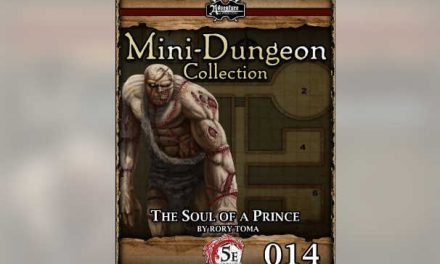