The Right to Arm Bugbears

This being an adventure-review, the following review contains SPOILERS. Potential players may wish to jump to the conclusion.

Still here? All right! If you’re familiar with “Thief in the Night”, you’ll be familiar with the backdrop of this module, since it can be run as a direct sequel to that module, though it doesn’t have to. The module thus kicks off with the PCs being hired by the city of Brdigefort’s Baron, one Tavius Mercen IV – who fills them in on the issue: The recent thefts in Bridgefort was no isolated incident – more thefts have recently happened, one particular problematic one hitting a man called Mortimer Fairgain – stealing his maps. If the PCs accept, they get a map made from the composite of the stolen maps. If they decline, the Golden Salmon Inn, where the merchant guild offers an alternate means of getting the PCs into the action. One particularity of author Cutis Baum’s writing is present in here as well would be the rather extensive boxed text – DMs looking for mostly spelled out, flavourful interactions should find them inside here. Finally, with a troupe of orcs and kobolds trying to bluff/mug the PCs, we have a third fully fleshed out way (or random encounter) to bring PCs into the module.

But back to the topic at hand: The trail leads to the so-called Forest of Mists, where the module gets sandboxy, allowing for multiple encounter areas, first of which would be the Bone Tower, which not only houses humanoids, but also a nice riddle/floor tile puzzle. The Temple of the Unknown God also has a neat puzzle -a not too difficult one about lighting torches according to some hints, and a more complex one that has light being refracted by sceptres – with a visual representation. I really liked these puzzles!

Upon their completion of ruin-exploration, they’ll encounter some wounded elves that point the PCs towards a fortress hidden in the fortress – and upon defeating these humanoids, the PCs will find a letter by one Emperor Chez’nak – the bugbear sergeant’s letter speaks of an impending attack on Bridgefort! Warning the town concludes the module for now – at least until the next module in the series. The pdf includes maps for the locations, thankfully also player-friendly maps, so kudos for that!

This is an interesting module – on the one hand, we get some really cool puzzles, with visual representations etc. – which is awesome. On the other hand, the module feels strangely disjointed – there’s not much connecting the different locales/encounters – they simply happen, one after the other, with not much linking them in the context of the story, making this feel more like a series of encounters leading up to the true meat (which will come in the sequel) than a true, cohesive module. Are the encounters bad? No. But they also aren’t particularly exciting or mind-blowing – it’s essentially about humanoid-bashing and that’s about it.

Taking hostages etc. is no option and at least some guidelines/pieces of information to string the locales together would have vastly improved this module in my opinion. All in all, what remains are solid encounters more fit for scavenging than being run as a cohesive module. And that’s not a good sign. While I really love the puzzles, the rest of the module remains painfully bland and even abstract at times – the bone tower and temple are, for example, apart from the puzzles mostly not fleshed out. The puzzles per se might make this worth a look for you, but overall, as a module, I can’t recommend this. My final verdict will clock in at 2.5 stars, rounded down to 2 for the purpose of this platform.

The Right to Arm Bugbears is available from: 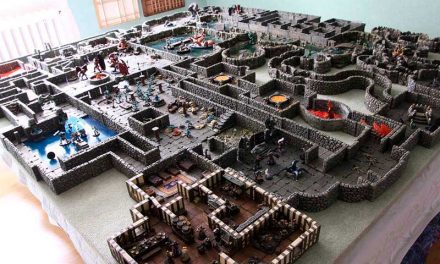 The Virtuous and the Vile: Morithal, Lord of Unceasing Hunger

Advanced Feats – Secrets of the Alchemist

Book Review – The Heart of Veridon