The Clockwork Wonders of Brandlehill

This being an adventure-review, the following contains SPOILERS, so potential players may want to skip to the conclusion.

Still here? All right! The PCs are recruited by a weird gnomish bard called Terrence Threncewell on behalf of a weird little gnomish settlement called Brandlehill, which is well-known for its weird clockwork contraptions. It should be noted that DM’s who have an issue with fluff get a LOT of very detailed exposition – almost 3 pages are devoted to the recruitment of the PCs before they meet the Dwarven trademaster of the town, one Orin Hardtack who wants a grippli-town removed. Grippli-town? Yes, for Brandlehill’s clockwork wonders are reliant on rare swamp herbs from the Zeranoth swamp and aforementioned grippli-tribe has mostly become hostile due to as of yet undetermined reasons.

The grippli waste not much time an attack soon – in numbers and the PCs will have to slug through quite a massive bunch of these froggy fighters -including the fact that the humanoids will try to flank the PCs en masse. The fluff also mentions a healing-impeding paste, though that one does not feature in the stats – an unfortunate disjoint between fluff and crunch here. After the attack, the PCs may follow the frog-people into the swamp to meet a grippli ranger called Ralka tells teh PCs about the sickness of the grippli’s leader and the fact that the apprentice has ordered the attack – there is something wrong with the tribe…

Ralka escorts the PCs to the village (where btw. a section italicized as a flavor-text is none – a mayor layout/formatting glitch there) – where they will realize that the water-supply of the grippli has been tainted – probably by the ambitious former apprentice. The grippli are rather unhelpful and seek to drive the PCs out of town. Weirdly, on the following two pages, layout changes to a superior 2-column standard only to revert to the one-column standard before. They can find the remains of a fallen half-orc ranger, who not only returns as a ghost, but also suffered from a demonic disease. With the proof, they can expose the apprentice upon a return to the grippli-village – after killing more grippli. Alternate solutions like diplomacy etc. should have been included here – not to speak of stealth…

The corrupt apprentice, though, has fled to the Harhoa Cave, where he makes a final stand with a demonic frog, guarded by grisly trophies and traps. Upon dealing with the evil-doers, the PCs may return to Brandlehill to choose one of 3 clockwork wonders. The first, a grapple launcher, is a ranged weapon that hits foes with grab and damage as well as having the potential to halt falls – unfortunately rather overpowered. The second, a triple-shot crossbow makes up for that by being too weak, whereas the third, which provides bardic performances in a box, actually is interesting – though ALL items lack crafting-information and proper item-statblocks.

The magic item, Cyrkssi’s Mirror Spear unfathomably follows the proper formatting, as does the magical Troll Wig-net. The pdf also features all the stats for the characters featured herein – but the statblocks lack italicized spells. The final three pages are devoted to neat 3 maps of beautiful full-colour maps with grids.

Editing and formatting are ok, though not perfect – especially formatting is problematic, with DCs and rules-relevant information having to searched for in the text due to a lack of proper highlighting. Layout mostly adheres to a one-column standard, which bloats the page-count of the module and is not particularly comfortable to read – with the inexplicable exception of two pages. The pdf is not bookmarked, which is a massive comfort-detriment. The pdf does come with two versions, one being more printer-friendly. The artworks, while original, are with the exception of the cover ugly – the artist can draw inanimate objects well, but fails with regard to characters/monsters. The battle-maps provided are beautiful, but the lack of keyed maps to place traps and adversaries makes running the respective combats rather difficult. It is also unfortunate that we don’t get a map of Brandlehill.

This module has quite some potential for being weird, funny and grotesque – and squanders it as it suffers from a myriad of beginner’s mistakes: From the weird layout to the rather abstract battle situations, we have quite an array of potential problems. Environmental factors in battle? Mostly underdeveloped. As are the respective locations. It’s weird really, how a module with such a massive array of fluff text can remain so abstract in combats and environments, failing to give measurements, exact dimensions etc., which render properly running the module much harder than it should be. Beyond that, the massive array of fluff often is not properly separated from non-fluff text, which is faultily italicized, whereas many formatting peculiarities like a lack of italicized spells render the statblocks less polished than they ought to be.

And then there is the railroad factor – there is zero possibility to jump off the rails on this one – the fluff text assumes actions on part of the PCs, which is a grand no-go and essentially the module not only lacks skill-DCs for navigation and non-violent resolutions, but is very stringent in its linearity. Since the origin of the problems the PCs face turns out to be rather obscure and esoteric, the ONE Chance to analyse the problem may be easily lost on the PCs – whereas they are railroaded to the source of the problem without any chances of doing research/information gathering. The alternate resolution including a full-blown annihilation of a settlement is introduced and never followed up on and the clockwork wonders are all over the place regarding balance. One substance is never given stats though the players should by all means also be afflicted by it. Alternate means of succeeding like stealth are touched upon, but sans DCs, guidance etc., rendering this module unfortunately an unfulfilling railroad.

This module has potential – its locales and characters are colourful, its ideas are not bad – but the overall execution is deeply flawed – as much as I love the battle-maps, they are abstract and the DM is left with figuring out where what is. Lack of environmental factors, alternate means of resolution, no bookmarks, sloppy formatting and the overtly railroady structure when combined with minor issues here and there unfortunately means I can’t rate this even as mediocre – in fact, were it not for the interesting magic items, well-crafted maps and nice local colour, I’d bash on this module even more. As written, my final verdict for this module will clock in at 1.5 stars, narrowly rounded up to 2.

The Clockwork Wonders of Brandlehill is available from: 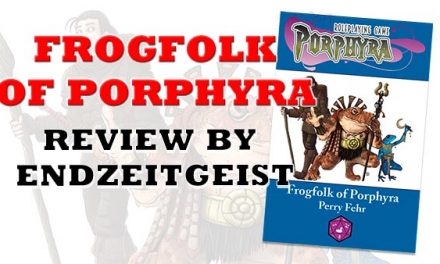 With a Bullet Point: 5 Haste/Slow Feats