This being an adventure-review, the following text contains SPOILERS. Potential players may wish to jump to the conclusion.

All right, still here? This is the second part of the Saatman’s Empire-adventure arc after A16, Midwinter’s Chill, in which a white dragon cast a frosty swath of destruction into the Klavek Empire. While not required to run this module, the metaplot also ties in with A16 and thus, groups playing multiple modules of the arc may start to see a pattern: The once glorious empire of Saatman seems to have an heir apparent and said dragon is gathering his kin to systematically dismantle the empire. The second part of the puzzle being the eponymous dragon Storm. Contend for as long as people remember to only pick of those ships that straggled in her territory, she has gone on to destroying a trade-route. When the PCs arrive at Cherr’s Landing (complete with settlement statistics), the once thriving coastal port is in a desolate, half-empty state.

In order to end the incursions, the PCs will have to charter a boat towards the island’s around the notorious Devil’s Point, where “there be dragons”. Instead of the culprit, abandoned warrens and a crippled, small dragon, actually Storm’s grandmother awaits. Once she has been dealt with (or bypassed) the trail will lead the PCs sooner or later to Shipwreck Cove, an island littered with shipwrecks picked up by Storm and smashed on the rocks. Now inhabited by Cecalia, slaves to her mate, the island is anything but empty and, among other things, also contains two kobold-heralds of Saatman’s heir, who are anything but push-overs with 12 levels.

Also nice: The Cacelia use the armament of the ships to their advantage: PCs may actually get shot by ballista-bolts! Also, a new being called a titanic globster (including the template) is part of the challenges here. In the end, the Pcs will have to attack Storm’s nest, where her mate, the brine dragon waits. Now his tactics are actually smart for once, keeping his distance and blasting PCs and, more importantly, fighting in the open sky, not some cramped cavern. Having an island full of minions also helps. Once he has been vanquished, the hoards stolen and the eggs of the pair either smashed or stolen, the PCs will probably be on their way home and think the module is completed.

They’re wrong. Storm, a titanic black dragon, will be VERY angry and her tactic to destroy the ship with the PCs on it is simple and brilliant: Take it, lift it into the air (about 200 ft.) and let it crash down for a nice TPK. PCs will have to be smart thinkers, fast in dealing damage and armed with hopefully enough utility magic. And hopefully, they’ve rested and deduced that the brine dragon was not big enough to wreck this destruction.

Editing and formatting are top-notch, I didn’t notice any glitches. Layout has been further streamlined, with the excellent cover (also featured as a gorgeous full-color 1-page-illustration in the pdf) being a shaded background on the pages – unobtrusive and nice, yet printer-friendly. I’m also a fan of the less stark boxes used for read-aloud text-boxes, skill-boxes etc. Where the layout FAILS in my opinion is with a particular decision: Usually, we had separate appendices for the combat stats of the respective characters and monsters featured in a given module – one for 3.5, one for Pathfinder. You just had to print out the stats you need. Instead of this separation by system, we now get the creatures in alphabetical order, with both stats. This means I have to waste toner/ink to print out stats for a system I don’t use when running the module, which SUCKS and is not particularly useful. I hope AaW will change back from this decision. Another thing I missed from this book was the player-friendly maps. All other AaW-modules usually feature player-friendly, key-less maps to print out for convenience – this one doesn’t which, again, is a bad decision I hope will not be continued. If that’s the price for the new layout, I’d rather have the old one back and I sincerely wish for the system-division statblocks and player maps to return/be added.

If all my reviews of modules by author Michael McCarthy have taught me one thing, then that he knows how to write locales dripping with iconic flavor. Unfortunately, also one of his weaknesses is present in “Storm’s Wake”, albeit not in as jarring a way as in “Midwinter’s Chill”. What good is a great, iconic backdrop when it doesn’t influence combat/skills etc.? It’s just that, a backdrop, when it could easily be used to make combat so much more exciting and unfortunately, that’s also true for this module: Yes, here and there are minor specialties like aforementioned ballista, but what about climbing in riggings of smashed ships? Sniping from crow’s nests? More complex tactics for the BbeGs and other creatures, terrain that actually influences combat in some meaningful way – if these two had been added, we’d have a legend of a module on our hands. Without them, the iconic locales lose some part of their magic and thus fascination. The lack of consequences of terrain/unique areas make the module more sterile than its 5-star-ideas would make you believe.

In fact, it feels like 10 to 20 pages have simply been cut from the module: The search for the culprit of the trade collapsing and location of the culprit is sketchy at best and feels like it could use an overview map of the islands/coast to help the DM portray the whole search. What is left of this section, especially the battle with the first “boss”, feel sketchy and cut down to a minimum and evoked the distinct feeling of SOMETHING being missing. I maintain that, with about 10 pages of additional content to properly flesh out, this module could rank among the finest – Some for the beginning, some for the main locale, some for the tactics of the antagonists, some for the BbeG’s tactics and there we go – one legend of a module. As written, as much as I hate to say it, “Storm’s Wake” falls short of what it could easily have been. Combined with the lack of printer-friendly maps its predecessor still had as well as with the user-unfriendly statblock-presentation with mixed systems, I arrive at a score that hurts me more than lower ones I’ve given: Due to the ideas and potential, I’ll settle for 3 stars, but only if you’re willing to develop the module further. If you want a go-play module, then this one is not what you’re looking for. For now, I’ll sink back and hope for a revision and the ability to rate this as high as its concept deserves. 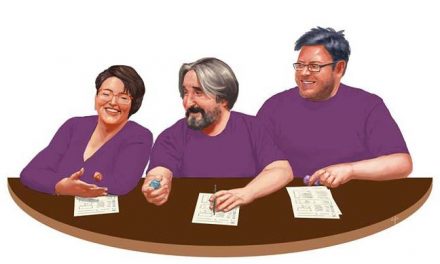