The penultimate installment of the “Splinters of Faith”-series from Frog God Games is 32 pages long, 1 page front cover, 1 page editorial, 1 page ToC, 1 page SRD and 1 page advertisement, leaving 27 pages of content, so let’s check it out!

This being an adventure-review, the following contains SPOILERS. Potential players might wish to jump to the conclusion.

Still here? All righty! Following the format of the series, we venture to the island city of Jah Sezar, a magocracy under the benevolent auspice of good arcanists. Once again, a task must be completed to receive the blessing and this one is rather peculiar: A good being has to willingly sacrifice his/her life in order to provide for the final blessing. Thankfully, an angel is currently being tortured in Abhor Brazier, the temple-fortress of Hecate. Situated at the complete other end of the world map, the two locations are VERY far apart and make the lack of transitions/journeys/wilderness-sections quite apparent. As the temple is located at the top of a mountain, altitude adaption is a problem that has to be taken into account. While rules are provided, more hazards and a more pronounced effect of the altitude would have been nice to add complications to the scenario.

The Hecate-temple of Abhor Brazier (3 levels btw.!) is a rather large fortress and features some individuals that would make careful planning on part of the PCs advisable: From a 5-headed iron-golem hydra with decapitating bites to several NPCs of CR 15 and higher, we are in for pain – a lot of pain. Especially the high priestess is a foe not to battle on her own terms – CR 20 if they do, even without additional support from other denizens! While the intrigues within the temple make semi-stealthy solutions viable, they do so only to an extent – with all the spells at the disposal of Hecate’s wizards, PCs will be hard-pressed to keep their intrusion under the radar. While the dungeon is lethal and works well as a deadly crucible for the PCs to pass and as a preparation for the things to come in the climax, the scenario nevertheless borders on being a meat-grinder. Which is not bad per se, at least for me – after all, I really love Rappan Athuk.

What is a downer for me in this module is, that some obvious chances were not taken: The followers of Hecate scream “Witches” to me, not wizards/sorcerers and I would have really loved for this module to provide us with some high-level witch-antagonists. That’s a personal preference, though: What is more grievous, is that the temple is, especially when compared to the excellently-written temples from the other instalments, rather bland. It just feels common, like yet another deadly dungeon to be cleaned out without offering much in the way of originality. Oh well, once the angel has been rescued and the followers of Hecate vanquished, the anointment of the Scepter will be complete and it is time to confront Akruel himself in issue 10.

The decline of quality in editing and formatting started in the 8th installment unfortunately continues and I found quite a bunch of editing/formatting glitches, even some double sentences. Layout adheres to the 2-column b/w-standard of the series and the artworks are neat. The pdf thankfully has bookmarks, although I don’t get why so many other installments don’t have them. This installment, more than others, is plagued by the issues of the series – no transition is especially grievous when the good temple is FAR away from the last one visited and when the evil one is essentially on the other side of the map. The high altitude and environmental complications have been kept to a minimum in favour of extremely deadly fights with spell-casters that feel a bit redundant – some less overkill on their levels in favour of environmental obstacles would have gone a long way in making the whole module more memorable. The lack of infiltration-routes like secret passages etc. unfortunately lead towards the DM either pooling resources and crushing the PCs like bugs or the “waiting bad guy”-syndrome. Information on how the temple reacts to alarms/ repeated incursions would have helped a lot in portraying the temple as a believable fortress. Add to that the fact that the temple is nothing special in appearance/structure etc. and we’re unfortunately in for my least favorite installment of the whole series – “Duel of Magic” feels like “the obligatory evil magic-user fortress” of the line and didn’t excite me crunch or fluff-wise. In fact, I consider the fluff of installment I to be superior to this one. Were it not for the glitches, I’d settle for a final verdict of 3 stars due to some interspersed good ideas, but as written I can’t say I was impressed by any component of this module. The authors have shown that they can do better. My final verdict will be 2.5 stars, rounded down to 2.

Splinters of Faith 9 is available from:

If you have enjoyed this review, please consider supporting the ongoing costs of this site by donating a small amount of money. 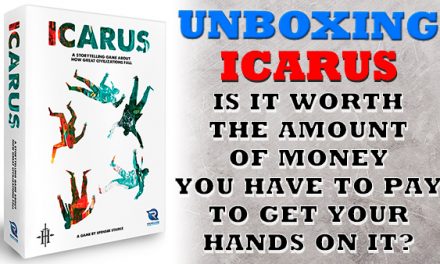