Slumbering Tsar: The Hidden Citadel, Part 6 – Caverns of the Barrier

This pdf from Frog God Games is 56 pages long and introduces us to the grand finale of perhaps the most epic adventure ever published, the finale to the Slumbering Stars saga and it clocks in at 56 pages, 1 page front cover, 1 page editorial, 1 page ToC, 2 pages of advertisement and 2 pages of SRD, leaving 49 pages of content, so let’s check out whether the finale of ST can top the stellar penultimate module!

This being an adventure review and one for the finale of the series to boot, this review contains SPOILERS for the FINALE. Players, you know the drill and believe me, you want to skip to the conclusion.

Ok, here reign the SPOILERS. The PCs by now have completed the exploration of the Hidden Citadel and have to brave the very depths to uncover and thwart Orcus’ final gambit by climbing down St. Haru’s Well and right from the start, the utter sense of ancient evil permeates every word as you read it. After essentially butchering their way through the elite cadre of Orcus’ clergy and his corrupted adversaries, the PCs are in for a change. A PUZZLE! A complex, smart PUZZLE! YES! In order to proceed, the PCs will have to brave an ancient problem (which can be solved via skill checks, but where’s the fun in that?) and then cross a huge chasm – animated arms are stuck in the ceiling and thus PCs can cross the deadly chasm by swinging from grasping hand to grasping hand – if they manage to avoid (another minor puzzle) the trap among the hands. If you’re stunned by the iconicity of this, just wait until the PCs meet the disfigured giant ferryman who, via his huge, deformed fist, might ferry them to the caverns in the shell of a dead albino dragon turtle across demon-infested waters.

Once the crossing into what can be considered an original tribute to underworld mythology has been braved, the PCs won’t have a respite and essentially face an army of Orcus’ chosen black orogs (some of which come with extremely deadly bristles) on their home territory and we’re indeed talking about the very worst of a strike force anyone could muster – a DM worth his salt can give the PCs truly a run for their money and a vast, epic battle/infiltration etc. is all in the realm of possibility. Several CR 20+ elite champions, ettin strikers and Orcus right hand, the demon lord Sonechard await the PCs. Yes. Sonechard. The demon lord. Is part of the opposition. As is an elemental earth dragon. And these are not the final bosses! Throughout the vast complex, insight on this isolationalist society are conveyed via exploration and the sequential battles and responses to the PCs incursion and your players as well as PCs are going to be challenged to their utmost abilities if they not only want to breach the territory of the orogs, but actually stamp out the vile breed and find the truth – in fact, the PCs may actually experience a vision that not only explains the genesis of the goddess Hel, but also that of Orcus!

And then, there’s the utterly epic final battle and it’s not against Orcus, but against the ultimate perversion of a draconic being – a sleeping golden dragon, infused and tarnished by Orcus foul will has been transformed and corrupted and is supposed to one day become Orcus’ chosen receptacle. An epic, final showdown against an ancient draconic being thus serves as the ultimate showdown of the epic Slumbering Tsar-saga and may actually result in the rebirth of a belief that has been forgotten as well as providing a fitting conclusion to this truly even now legendary saga. And rest assured that I have not mentioned all this conclusion has going for it.

The pdf also includes an appendix with the Disciple of Orcus-PrC, two pages detailing the hierarchy of Tsar’s military and church and 9 pages of maps.

Editing and formatting are top-notch, I didn’t notice any glitches. Layout adheres to the 2-column standards and the b/w-artworks are neat. The pdf comes with full bookmarks. I was rather hoping for this saga to end on a high note and with all the quality ideas and sense of ancient evil permeating the saga, I was sincerely dreading the Mass Effect 3-effect. I’m happy, extremely happy in fact, to report that this finale represents a brilliant and fitting conclusion of epic proportions to all the suffering, sweat and pain of the PCs. The descent, the final battle, the dread force, the lost truth the PCs can uncover. The Puzzle, the challenge. Any group of PCs who considers themselves at the top of their game – this saga is a challenge to your experience, your ability to persevere and defeat the worst the dread Demon Lord of Undead has to throw at you. Tsar is Abyss on earth, perhaps even worse. And it is this sense of epic threats, of an almost undefeatable evil that brings out the best and worst in PCs as they brave dangers beyond the ken of just about any module out there. Take up the weapons, memorize your spells and look at this challenge – a wasteland, a huge city, an iconic dungeon. Your PCs are standing against the ultimate taint and perhaps the doom of your very world. Gear up, pray to your gods, enter the desolation and brave the dangers. This conclusion to the saga is a worthy finale indeed. My verdict? 5 stars + Endzeitgeist seal of approval.

Slumbering Tsar: The Hidden Citadel, Part 6 – Caverns of the Barrier is available from:

Wreck of the Keening Crone 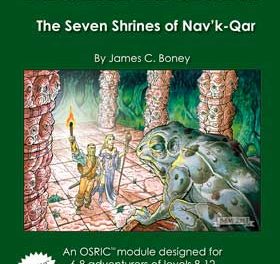