Secrets of the Primordial Forest

The content starts with an aptly-written, short introduction to the matter at hand, the tome of Merenal. 4 new spells from this ancient repository are introduced:

Finally, we get the5-lvl-Ancient-PrC. (d6, 4+INT skills, bad BAB, good will save) The class touches upon the connection to the ancients via the tome of Merenal, granting ability boosts, detect magic, changing the appearance of the character towards the Isten and having a cool capstone ability. This class is my favorite part of the book.

This is the first venture of the “Secrets of…”-series that features several new crunchy bits linked by an RP-element, in this case, the Tome of Merenal. I personally think this is a great way to expand the scope of the series. The artwork is ok for the price.

However, this pdf unfortunately left me rather underwhelmed, especially in contrast to the other excellent books by Rite Publishing: The introduction to the tome, usually written IC in Rite books, felt a bit generic and left me not too impressed or inspired. The editing glitch in one of the spells could have been avoided. The aura spell is useless as written. The magic items and feats felt underpowered to me: I wouldn’t take any of them, apart from “Savant” (Great for Investigation campaigns) and “Rush of Insight” (Nice for Gish). I am a bit weary of “Improved Crafting”, as a feat like that _might_ (I haven’t crunched the numbers) upset the balance of a campaign. While avoiding power-creep is a noble goal, I can’t see my players taking these feats.

I already mentioned my problem with the Ley Compass and the magic items, especially when e.g. compared to 30 Unique Magical Blades, they all felt rather bland to me.

The Ancient PrC was nice, though.

So, what’s my conclusion? Unfortunately, this pdf did not impress me – while the price is low, this pdf falls awfully short of the excellent quality Rite Publishing has set for itself. Due to the glitches, the balancing problems and the fact that it just didn’t inspire me at all to implement its components into my campaign, I’ll rate this 2 stars and hope that this part of the series will improve in further instalments.

You can buy this from: 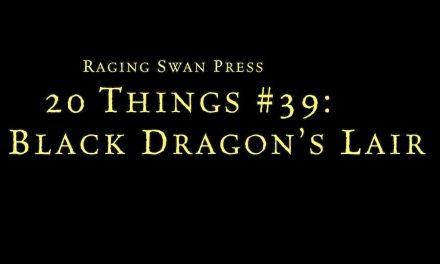