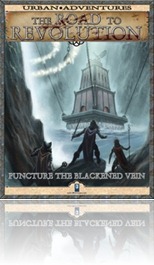 This being an adventure review, the following contains massive SPOILERS. Potential players might want to jump to the conclusion.

Seriously, you don’t want to SPOIL this one.

All right! How does one Top the potentially furious finale of a Dock Ward set ablaze? And how does one do it with the blandest (at least in my opinion) ward of the Great City? A Kortezian Clan, Gimbros, sees the Great City as the promised land of their patron deity W’Jur and a female scion of said clan has lately made the acquaintance of Azindralean loyalists and over them, started manipulating a helmate of Adhelmus Oxda called Bizby Eialla, servant to the patron god of the oppressors to take the fall for the things to come…

Be it via the broadsides or one of their various employers from earlier installments of RtR, the PCs are pointed towards Erromin’s (also known as The Crusader’s Inn, including a detailed map) where the adventure might kick off with a brawl – hopefully the PCs are smart enough to talk the crowd down and gain their trust. After some good brawling and/or investigating, the PCs are pointed towards the Holy Smokes, a hookah-café that doubles as the favourite hangout for the scions of Clan Gimbros, a rather powerful group of adventurers (including a flesh-golem disguised as another one of the crew who is not only smarter and deadlier, but has a literal heart of gold) called Brandy-Foxes. The group of Gimbros is led by Larina Beltimont-Gimbros and after an immaculate conversation of misinformation she send the PCs off to the warehouse where the masques for Adhelmus Oxda’s impending, solemn Masque are kept.

The two-story warehouse gets very detailed maps featuring huge chains to pull up papier-mâché floats and even cut out versions of the chains for use as impromptu, slow, but deadly weapons. Why would the PCs do that? Well, their breaking into the ware-house is a set-up and legendary enforcer of Adhelmus Oxda, Bonnabel Treach attacks with his hypnosimians, mistaking them for accomplices of Bizby. This encounter is simply awesome, evoking not only the feeling of fighting a smart, well-trained troupe of elite-enforcers in a unique location, but also offers cool environmental hazards. If they survive, negotiate, defeat etc. Bonnabel, they’ll have some questions and be none the wiser, returning to the Holy Smokes.

Back at the Hookah lounge, they’ll have to eventually deal with Reth Grimbos, one of the Brnady Foxes and his animated opium-fumes-spilling Hookahs. Once they defeat him (and find 2 of the copious handouts provided), they’ll have to attend the great and solemn masque of Adhelmus Oxda to find Bizby.

In a great piece of meta-humor and twisting of roleplaying clichés, Bizby is clad in a red herring costume and the encounter that has the PCs trying to spot Bizby at the masque is complex cool, and comes with a whole page of complications, culminating in Bizby announcing the advent of Adhelmus Oxda’s temple before using a special kind of dust to escape to the sewers, the PCs hot on his trail. Following him through the sewers, the PCs might find the entrance to the legendary Blackened Vein, where the revolutionary, legendary hardy brutes once held their last stand. There, the PCs might find a prominent general’s bunker (fully mapped), now inhabited by an underearth man and offering a puzzle-encounter that can be at once considered a nod to e.g. the Fallout series and rather unique in its set-up.

Finally, the PCs reach a (once again, fully mapped) limestone cavern, where Bizby tried to use a clockwork bomb, just to be interrupted by a dread aberration – whether Bizby is killed or not, has been caught or not – several possible outcomes may come from this. Bizby has the clockwork detonator to the bomb and cripple, the fleshgolem with the heart of gold, stand ready to destroy the pillars of the cavern with brute force, if necessary. Should both fail, the Brandy Foxes launch an all-out assault, making this one of the several possible conclusions of the adventure. But why do they want to blow up the cavern? Blowing it up will kill Bizby, drain the temple ward’s Lake Idyll directly into the caverns weeping the PCs along the blackened Vein into a cavern, where the floating, subterranean temple of W’Jur while putting the blame on the adherents of Adhelmus Oxda.

After hopefully surviving the flush through the vein and the attacks of the golem, the PCs are flushed into from a waterfall into a huge cavern that is starting to fill with sewage, slowly lifting the temple of W’Jur upwards. The ascent is controlled by 4 huge chains and the PCs, once they have reached the fully-mapped, floating temple will have a climax of the most epic proportions on their hands. Not content with discrediting Adhelmus Oxda, the rising temple features a detonator pole that, during the rise, sets of explosions that will start to annihilate the respective temples of the temple ward, blowing them up from below. The PCs will have to try to save the castrati children choir singing praises to W’Jur while fighting said god’s adherents, the Brandy Foxes under the command of Larina and contend with more complications: Bonnabel Treach and his allies attack via hypnosimian-dragged rattan baskets. If that was not enough, a now defunct goddess of slaughter and one of her mad adherents have infiltrated the W’Jur-priests, thus a huge, deadly Zaelamental rises from the sewage and sluge, as the buried power of this goddess is once again unleashed. Have I mentioned the potential for single chains slacking and tilting the temple? If this finale seems awesome, but daunting to run, fret not, for a several pages are provided for you to make running this mega-battle actually EASY and manageable with minimum preparation. I managed to run a flawless finale with just 2 read-throughs of the whole adventure. Depending on the finale, the temple may rise or not, get jammed in the shaft, the PCs might be wanted fugitives or not and the temple ward might lie in shambles, piety and trust in the gods broken beyond repair. W’Jur may have ascended to the rank of a greater deity due to being the one to emerge from the destruction and lastly, the mistress of slaughter might be on the rise again…

The pdf closes with new stats for monsters, to be more precise, the Hypnosimians (CR 2), the Underearth Man (CR 10) and the Zaelamental (CR 13).

Editing and formatting are very good, while there are some glitches, they didn’t not impede my ability to run the adventure and stay out of the crunch-information. Layout adheres to the classic b/w-two-column standard and the original pieces of B/w-artworks rock. The pdf comes with extensive bookmarks and the handouts are available in b/w and full color and amount to a whopping 7 pages. The cartography, as we’ve come to expect from 0onegames, is top-notch. Let me come out and say it: As far as investigations go, this adventure is simple, especially when compared with other installments of the Road to Revolution. However, that’s the point! This whole adventure is a tour-de-force, a rollercoaster-ride of awesome encounters brimming with iconicity and excitement, offering a neck-breaking pace of extremely smart battles, environments and ideas. The plot to be uncovered is complex and megalomaniacal, but its execution is smart and makes it potentially work.

The opposition is no bunch of cackling fools and makes use of their powerful spells and abilities in the smartest way conceivable. While the basic narrative structure of the adventure remains linear, its plethora of fail-safes by the foes, alternate strategies and wide array of potential climaxes and aftermaths ensure that the DM does not have to railroad his players. Then there’s the finale. I’ve rarely, if ever, read or DMed such an AWESOME climax. Epic in location, fighting, strategies, the finale puts almost all movies I’ve seen to shame. Lou Agresta and Rone Barton have created an adventure that is distinctly different from their last contribution to the Road to Revolution arc and while I adore the former, this adventure is completely different in tone, pacing and design, being very easily transplanted to any other big city with ethnic tensions and some temples. The stellar quality of the Road to Revolution arc manages to keep its lofty perch, resulting in another adventure that would deserve 6 stars, could I rate it that high. My final verdict thus will be 5 stars and the Endzeitgeist seal of approval.

Road to Revolution IV: Puncture the Blackened Vein is available from: