This pdf from Raging Swan Pressis 32 pages long, 1 page front cover, 1 page blank inside of the front cover, 1 page editorial, 1 page ToC (including the foreword), 1 page advertisement, 1 page SRD and 1 page back cover, leaving 25 pages of content, so let’s check out these ready-to-drop in encounters for the woods!

The basic concept is simple – provide a random encounter with environments, stats etc. that goes beyond PC fighting some creature in a undefined location. Instead, we get information of e.g. fallen trees to provide cover etc as well as information on how scale the respective encounters up and/or down..

The first encounter (EL 5) already provides a rather smart encounter – 2 poor unfortunates are caught on the upper floor of a derelict building, beseiged by vargouilles (and slowly transforming themselves) as well as a fiendish melancholic ooze swarm (which has paralyzing/entangling quality). The encounter sets the mood for this second instalment of Random Woodland Encounters – the encounter not only has neat monsters, but also provides a neat moral conundrum (if they can’t be saved)/rp-follow-up (if they can be saved) when talking to the survivors of the vargouille-attack.

The second encounter (EL 2) has the PCs travel a broken road to find Raine Eronen, a wizard whose horse fell from a cliff, fracturing his leg. Rescuing the wizard might provide a nice ally for the PCs – provided they manage to carry him up and succeed at the risky endeavour of climbing down to him and carrying him to the next village.

The next encounter has the PCs square off against some owlbears currently feasting on the corpses of some unfortunate adventurers. Simple, easy to drop in and features a GORGEOUS artwork of the owlbear.

The fourth encounter is probably the most uncommon one in more than one way – it comes with a nice, key-less map of the cavern in which it is set. The entry of said cavern is guarded by a yellow musk creeper as well as 3 of its victims turned musk zombies. These sentries function as the guards of the master of the cavern, a quickling ranger called Zerath. Very cool little encounter.

Next up is a small encounter (EL 3) that has the PCs meet a riderless horse, providing for a neat piece of foreshadowing for other encounters. The horse, when tamed, might also provide a replacement mount for some PCs.

Thus armed with a warhorse, the encounter (EL 2) with cavalier Vario Ilmonen of the order of the cockatrice might result in friendly jousting, all-out hostility or even a permanent alliance.

Perhaps the PCs and cavalier join forces to save the Dwarven scout, Yurval Wersten (EL 3) from his predicament – webbed up to a tree by a spider swarm and a giant spider, the weakened dwarf might make for another potential ally or provide reconnaissance/maps to the PCs.

The final encounter of the pdf (El 5) has the PCs meet the 3 survivors of an unfortunate group of adventurers that has recently lost some of their members. Whether they’ll be allies or rivlas, the survivors make for a nice roleplaying-heavy encounter.

After this, we get an innovation of Raging Swan, the statblock-library. Essentially, from now on we’ll get the statblocks (with headers like “fey” etc.) at the end of the book and may thus, over time, develop a library of NPC statblocks to use when spontaneously in need of one during play.

Editing and layout are top-notch, I didn’t notice any glitches. Layout adheres to the printer-friendly 2-column b/w-standard and the artworks are neat. The pdf comes with bookmarks as well as a special version optimized for use with e-readers. Content-wise, I preferred this instalment of Random Woodland Encounters over its predecessors in that none of the encounters are downright one-dimensional slogfests and feature often social encounters or at least the option to have some non roll-playing elements. However, there are some minor gripes I have with this pdf: While I love the NPC-library-idea, you should be aware of it – I printed out all the stats as well. I think that presenting them in a separate pdf might be a better option, especially as it would enable one to collect the library-pdfs in a separate folder Content-wise, I did prefer the encounters herein to the predecessor, but there is still room for improvement in that none of the encounters has this je-ne-sais-quoi, this iconic characteristic that lets your jaw hit the floor. While I realize that special encounters are harder to fit into a woodland, I would have loved for more ideas like the melancholic ooze swarm – it’s minor modifications of creatures that make random encounters feel more unique. The series is on a good way and thus my final verdict will be 4.5 stars, unfortunately rounded down to 4 stars, as this simply doesn’t feel like a full 5-stars to me. 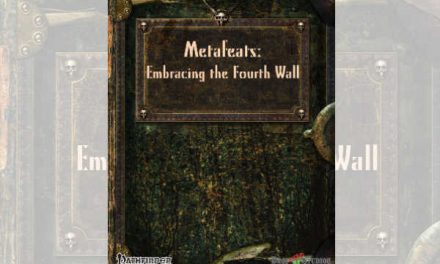