One Night Stands – Death in the Painted Canyons

My by now obligatory disclaimer accompanies this product – this being an adventure review, the following text contains SPOILERS, thus potential players might want to jump to the conclusion.

This adventure takes place in the Satrapy of Salt Springs, a generic, albeit quite specific and easily insertable sub-section of the world inspired by Scheherazade’s tales or settings like Al-Qadim. More recent examples in gaming history would be OD’s Six Arabian Nights or (to some extent) the Legacy of Fire AP. That out of the way, we get a neat map of the overall region before we’re introduced to the Satrapy of Salt Springs and its denizens. The settlement bears special mentioning, as this adventure can be seen as half investigation/half wilderness and is presented in a very sandboxy style. Befitting any sandbox, however small it may be, we are introduced to a neat array of local flavour that starts with local currency and continues on with conversational rules. While not necessary obligatory, these tidbits serve to enforce the feeling of the Satrapy and definitively show author Kenneth Spencer’s grasp on unfamiliar cultures, cementing him further as an author to watch, at least in my opinion.

The adventure begins with the adventurers meeting up with the Pascha of the city and striking a deal with him. Gnolls under the leadership of two particularly notorious war-leaders have been extraordinarily successful with their raids on the satrapy’s traders. The Pascha wants these individuals dead and their tribe disbanded. While it’s perfectly possible for the PCs to do just that, set out and destroy the gnolls, there is more to this adventure: Conspirators against the Pascha have supplied the information to the gnolls via some rather clever tactics – the merchant prince Hiram Parth, who also provides for the PC’s quarters, is playing a dangerous double-cross and to put all the pieces together, the PCs might actually have to infiltrate the Pascha’s dungeon and save a captive doomed to die – without becoming outlaws themselves. the gnolls and their tactics are rather smart, including a fully mapped ambush and a settlement at the top of two pillars, where dingy rope-bridges make for all between the PCs and a deadly fall to the bottom of the canyon. When and how the PCs tackle the gnolls, conspirators etc. remains up to the PCs, as is how they deal with the mastermind behind this heist.

Editing and formatting are top-notch, I didn’t notice more than 5 glitches. It’s a bit of a pity that 3/4 of the final page is empty, though – I would have loved for the space to be filled with additional content. Layout adheres to the classic 2-column b/w-standard. The Arabian Nights-themed maps are gorgeous and the b/w-artworks rock. The adventure comes with extensive bookmarks and the canyons make for a rather cool wilderness. The satrapy is culturally interesting and hearkens back to positive reminiscences to Robert E. Howards works . replace the antagonistic humanoids with savage cultists and there you go. That’s also where I’m a bit disappointed in the adventure – there are no puzzles and e.g. 3/4 of a page on cultural information on the oppositional tribes would have made them more unique. Via their interesting leadership NPCs, the tribes could have easily made for truly unique foes, perhaps with a nod to their unique and iconic home. In the end, this lost potential prevents me from going all-out on this adventure and thus, my final verdict will be 4.5 stars, rounded up to 5 for the purpose of this platform. 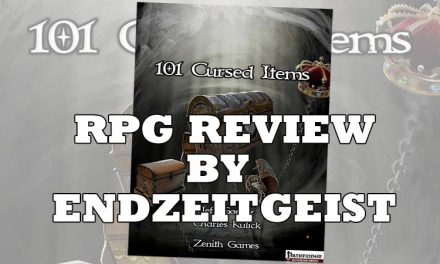