This installment of the Mythic Menagerie-series by Super Genius Games is 23 pages long, 1 page front cover, 1 page foreword, 1 page editorial/SRD, leaving 20 pages for new hags to add to covens and conjure up the darkest powers, so how do they hold up?

The pdf begins with a short discussion on coven magic, arguably one of the defining characteristics of hags before delving into the latest addition to the roster of evil crones, the disgusting Bangungot (CR 6): Terribly obese, these grotesque creatures have lost their teeth and can vomit up the bones of the poor unfortunates they have consumed to obey their every whim as undead servitors or support them, when their spear-like nails don’t do the job alone. Very cool!

The fanged Gwrachod (CR 13), with flesh like teak and disgusting tusks come with their own poison, a horrible, bleeding bite and are attuned to the elements of their lands. The may enchant body parts of the fallen to create truly disgusting magic items.

The Hu’Pochtli (CR 9) are jungle witches inspired by Aztec-style cultures and make for fearsome combatants – not only due to their rage-inducing auras and the ability to turn snakes into spears (and back again!), but also because they heal every time they cause injury. Her Serpent Spear (Sp)-ability is not in italics, though.

The most powerful of the Witches herein is the Kalaratri (CR 15), a large, 4-armed witch inspired by Indian mythology, which is mechanics-wise the most interesting creature in the book: Using her Skirt of severed humanoid arms (!!!), these harbingers of apocalypse, consummate foes of outsiders and schemers can cast via the skulls of her three first victims by having her skirt of arms configure the skulls. This, of course, leaves her hands free…all 4 of them. Fearsome, deadly, iconic – what’s not to love?

The Night Filcher (CR 6) is less powerful, but disturbing nonetheless: Consummate kidnappers, their very touch causes a searing pain and their gaze can send you into spastic seizures. To add insult to injury, when not rescued fast enough from their clutches, you’ll probably have to face the blades and spells of your erstwhile comrades – the filcher can change people into their slaves. Slaves that do everything to keep their new mommy happy…

The Rokurokubi (CR 7) is a special, rather eastern witch that shares some similarities with Hebi-no-onnas, namely that her arms end in snake-heads. She does not stop there, but adds disguises, illusions and snake legs and a disturbing head to the portfolio. Nevertheless, I felt a bit like "been there, done that" here.

The CR 7 Truie is something completely different: Boar-headed, violent and eternally hungry, these gluttonous creatures make for powerful enforcers and serve as a nice variation from the cliché of the scheming hags by putting some raw, brute strength in the mix. Neat!

The final new hag we get is the CR 3Whaitiri – bowed women constantly weeping blood, in whose distended bellies the remains of their former victims can be seen. Have I mentioned their magical guffaw? Creepy imagery, well-presented and cool to spring upon low-level PCs. Two thumbs up!

Hags are known for creating disturbing items and thus, we get a neat little array of deadly tools utilized by the covens of chaos:

Ever wanted to use large mosquitoes as darts to drain foes of blood and subsequently heal yourself? Use nets of hag’s hair? Put death-bearing skulls on poles, Egil Skallagrímr-style? Use severed human ears to survey conversations? Do you love these items as much as I do?

The 7 new feats centering on hags and coven magic are ok, but pale in comparison to the AWESOMENESS of the magic items, while the 4 new spells (including a rain of leeches!) capture the grimy, dread flair of hags perfectly again.

Editing and formatting, while not perfect, are very good and offer apart from very minor glitches no major reasons for concern. Layout adheres to the 2-column, full-color standard and the b/w-artworks are neat. The pdf comes with bookmarks, which is always nice to have. I generally liked the witches, ähem hags, herein – With the exception of the lame snake-hag, they all bring some interesting aspect that hasn’t been done to death to the table. The new items rock and ooze style and while I’m not into the new feats, I figure the "every book needs feats, whether it makes sense or not"-disease has not yet abated. The new spells are cute, although I would have preferred some coven-exclusive rituals for the poor hags…perhaps in a future installment? *winkwink, nudgenudge* Seeing that I have only minor gripes and that the amount of content that rocks surpasses any suboptimal aspects, I’ll settle for a final verdict of 4 stars – a good installment of the series that could have been the best.

Mythic Menagerie: Covens of Chaos is available from:

With a Bullet Point: 12 Alternatives For The Rogue’s Trapfinding Class Ability 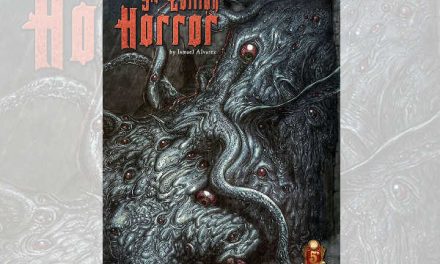