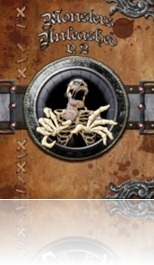 This pdf from Purple Duck Games is 16 pages long, 1 page front cover, 1 page editorial, 3 1/3 pages of SRD and 1 page featuring tokens of the critters, leaving 9 2/3 pages of content for the new beasties, so how are these beasties going to plague our PCs?

Next up are the Clay Warriors, Archers and Cavalrymen (CR 3, 3 and 5, respectively), construct guardians based on the fabled terracotta army of Xi’an. Surprisingly, each type comes with at least one, sometimes more abilities that sets them apart from brethren and other beasts – neat! Even better, they come with construction notes.

Tired of PCs being no longer afraid of wolves? Has the shield-time begun in your campaign? Excellent, then unleash the CR 22 Fenris Wolf upon your unwitting players and make them tremble (and perish) while you cackle with glee. Oh yeah, you don’t have to blast your mythology asunder or usher in Ragnarok for your campaign to feature the Fenris Wolf (though it helps) – a nice sample idea is given that involves a chained clone.

Unfortunately, the entangling, str- leeching burial-mound guarding CR 8 knollmen don’t live up to the standard set until now, providing no unique signature ability and feeling like just another burial mound undead. Next. Or at least, that’s what I thought. Thankfully, the guys from Purple Duck seem to have thought the same and provided 3 alternate signature abilities as well as a truly cool take: Why not take the myth of the fisher king and twist it to an undead ruler seeking to reclaim his kingdom? The result is an additional CR 14 statblock, a fiendish gorilla companion, a antipaladin feat, a new spell to force allies to kill each other (quite powerful, but great for specific NPCs) and a satisfied Endzeitgeist.

I consider plant monsters to be creepy. I don’t know why, I just always did. The camouflaged Quick Grass, a slick CR 4 predator makes a nice addition to said roster.

Editing and formatting are ok – I did notice some letters that were bold when they shouldn’t have been, but other errors seem to be absent from the pdf. Layout adheres to the 2-column standard and the b/w-artworks by Michael Scotta are neat and not something I’d expected to see for this low price. The pdf is extensively bookmarked. This instalment of Monsters Unleashed is vastly superior to its predecessor, providing cooler critters, signature abilities for all of them, and even variants. Combine that with the very low and fair price and you get a hearty recommendation and a final verdict of 4.5 stars due to the editing glitches, rounded up to 5 for the purpose of this platform.

Horrors of the GOW is available from: