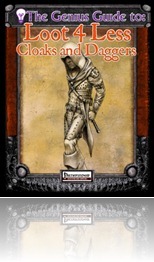 This installment of the L4L-line from Super Genius Games is 9 pages long, 2/3 of a page front cover, 1 page editorial/SRD, leaving 7 1/3 pages of content, so what cloaks and daggers do we get?

First, we get 10 new cloaks for the price-conscious adventurer, beginning with a selection of racial cloaks in the vein of the famous Elven cloaks – the Dwarven cloak lets you smite certain humanoids, while the Cloak of Gnomishkind can detach itself to help you escape just about every grapple once per day. The Haflingkind cloak lets your cloak move at 20 feet climbing speed twice per day while humankind’s cloak emphasizes the competitiveness of humans and the Orcish garment makes you more fearsome to your foes.

The true winners among the cloaks and mantles, though, are two rather strange cloaks: The Purring cape purrs like a cat and lulls you into a refreshing slumber, even in damp, unpleasant surroundings or when in armour (though you still are fatigued by the latter). Great idea! My second winner, though, is the Guard Stole: Reminiscent of a silvery fox, the stole can be activated and remains so for 3 hours. If you are attacked during that time, the stole animates and intercepts up to 8 points of damage. I love the imagery, the idea and rest assured that I have since first reading this item created more for the aristocracy and decadent high society in my campaign world. Top!

If you own the compilation “Things that go boom”, an unpleasant surprise it waiting for you here: While it’s nice that the daggers have been included in said compilation, I don’t really get why this particular pdf was cut in half, as the cloaks are not part of the first compilation. Oh well, in case you don’t own the compilation: We get 6 new daggers and knives with some rather awesome ideas: Invisible dirks, a magic letter opener that leaves seals unharmed (great for spy-plots!) and a table knife that can make a piece of cloth a solid surface – quite cool.

Editing and formatting in this installment of L4L are actually better than in the compilation – a typo in the table knife is absent in this original. Layout adheres to the 3-column standard by SGG and the b/w-artworks are nice. The pdf has no bookmarks. How much use you get out of this installment of L4L depends on whether you own the compilation or not – while I have no balance concerns with regards to the items, I’m not sure whether the cloaks alone make for a valid purchase, in spite of them being excellent and well-written. If you do own the compilation, detract a star from the final verdict. This installment has some of the most far-out, original and cool items in the series and thus it should come as no surprise to you that low-magic loving Endzeitgeist digs the cool and very “magical” feeling of e.g. the guard stole and the table knife – items that not only duplicate effect xyz, but feel MAGICAL. Thus, my final verdict for this pdf, due to a lack of gripes, will be 5 stars.

Loot 4 Less vol. 6: Cloaks and Daggers is available from: