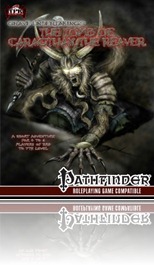 This first adventure module by TPK Games, this pdf is 20 pages long – 1 page front cover, 1 page editorial, 1 page SRD and 1 page back cover, leaving 16 pages of content for this adventure.

This being an adventure review, it contains SPOILERS.

Potential players might want to jump to the conclusion.

Grave Undertakings are designed to be hard and this one clocks in at 3 tombstones, so expect a challenge here – The PCs get recruited by a town to find a missing girl, stumble across the adventure etc. – 3 adventure hooks are provided and they all have in common that, via some way or another, they’ll lead to PCs to the entrance of a burial cairn. A mini-map is provided for the top of the cairn, which makes for a nice service. The cairn is unfortunately the final resting place of Caragthax, a vile warlord who had his treacherous lieutenants buried alive alongside himself.

The cairn is a death-trap indeed – the stairs down are greased and once the PCs arrive in a heap, a special crypt thing with faster teleportation abilities than usual will try to split the party: The cairn is round and the tombs of the 7 buried lieutenants are aligned in a concentric ring around the central hall. Each of the minor tombs features a locked stone door as well as a ghoulish inhabitant who wants to eat the now separated PCs – one of the tombs includes the now undead girl instead of the original ghoul, if you’re using that angle and are in for some dark twist, that is. After hopefully defeating their foes/escaping to the central room (arcanists will be especially hard-pressed to survive in close quarters against the ghouls), they’ll have to face off against the tricky crypt thing, now supported by the remaining ghouls and, after defeating the undead, the rising Caragthax. Once the undead reaver has found final death at their hands, the PCs have completed this grave undertaking. The cairn gets a nice one-page map.

It should be noted that 6 pages of stats are provided, two each devoted to an array of foes – CR 4, 5 and 6 are covered, offering diverse challenges and taking the annoying work of adjusting stats off your hand – nice! It’s great to see 3 variations of the ghouls, the crypt thing and Cragathax, but on the other hand, this service costs some space. The pdf also includes 3 house rule suggestions as well as a new magic item quality to protect the undead against channel-bombs. Information on treasure for the individual encounters as well as XP is also provided.

Editing and formatting are top-notch, I didn’t notice a single glitch. Layout adheres to the mostly b/w, red-accented 2-column standard we already know from TPK games. The cover artwork is awesome and the interior art is nice as well. Additionally, the pdf comes with an extra 18-page printer-friendly b/w-version. If you choose to run the scenario via laptop, you have another advantage – in the tradition of TPK games, each and every skill, qualities, types, templates applied etc. – every rules component beyond the absolute basics is hyperlinked to d20pfsrd. Mechanically, there is nothing wrong with this adventure – its stats are as far I could tell, rock-solid and the respective builds and set-up are well-conceived and deadly – this is not a scenario for the faint of heart. Additionally, the presentation is professional. However, I do have a gripe with this grave undertaking, namely that its origin as a convention scenario is readily apparent – apart from a plot hook that can be at best considered a flimsy pretence, this is a hack-fest. Which in itself would not be bad.

What is problematic, though, is that this whole adventure is essentially one drawn-out encounter with 3 phases – one-on-one encounter, showdown with foes and re-joined party, then the boss. That’s it. The sub-areas of the cairn get no boxed text or individual flavour and although it is mentioned that Caragthax had his lieutenants buried in opulence, not much is left or detailed in the adventure. In fact, we get no individual information for the sub-cairns. This simply is not an adventure, but rather an encounter – a well-written one with some skill-checks leading up to it, but there is no plot to speak of. No development in the dungeon. No exploration. Just one single non-combat hazard, a trap. That’s it. For 5 bucks, that’s simply not enough. Seeing that Frog God Games has longer ADVENTURES for the same price, as does Raging Swan, and that the price of Pathfinder Society Scenarios is lower, we have a problem here:

The average PF-society scenario is longer, has more story and features more encounters. Granted, presentation, mechanics, etc. are all at the top of the game, but in the end Caragthax at best offers you one till half a session of fun (my PCs would complete this in 2 hours) bashing in the faces of undead in a cairn until either they or your PCs have bit the dust. I really like the premise of the Grave Undertakings-line. I like the artwork. I like the hyperlinks, rock solid mechanics etc.

But content-wise, this simply is not enough. For 2 or 3 bucks, I’d give this one a 3.5 or 4 star-rating, but for 5 bucks this is overpriced and offers not enough content. UNLESS you are specifically looking for a plug and play convention scenario or a single hard encounter. If you’re looking for the latter, this might be 4 stars. For everyone else, though, the sojourn into Caragthax’s abode will fall short of their expectations and its own potential. My final verdict will be 2 stars, as it does not deserve the punishment of a one-star rating.

Oracle Curses (PFRPG) is available from: