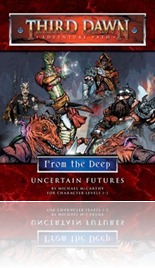 The first part of Dreamscarred Press‘s adventure set in the all-psionic world of Ksaren is 55 pages long, 1 page front cover, 1 page editorial, 1 page SRD and 1 page back cover, leaving a whopping 51 pages of content, so let’s sharpen our mind’s eye and check this one out!

This being an adventure review, I urge potential players to jump to the conclusion due to rampant SPOILERS.

Still here? Righty right! When the second-most powerful seer in Arbil collapses dead after a cryptic prophecy about the unraveling of future, the PCs are charged to prevent the destruction of futures as prophesized by the now-dead psionic. Thus, the pdfs are set off on a sandboxy journey through the city of Arbil and the surrounding area – after all, trade with the nearby kobold mines have all but ceased and the recent earthquake does not bode well. In Arbil and the surrounding lands, a plethora of sidequests of the fetch(kill-variety abound and make one reminiscent of e.g. Baldur’s Gate 1. It should be noted, though, that the xp-rewards for these quests and throughout the whole adventure are rather massive for my tastes.

The surrounding area of the city unfortunately features one of my main gripes with this adventure: There is no keyed map of the forested area containing several of the side-quests and ultimately the entrance to the Kobold Mines, nor a map of the kobold city, making these parts of the adventure feel rather abstract, while a battle against a lycanthrope-group and their leader is fully mapped. This serves to evoke a feeling like the focus of the main story has been somewhat lost in the commendable amount of things to be done. In the Kobold City, a minor murder mystery is set, that as presented is nothing but a series of skill-checks around an amorphous area I find myself hard to picture – a pity in the face of the rather neat little mystery, for the main antagonists of this adventure are puppeteers, slug-like mind-controlling parasites that make each and every defeated foe count double – saving as many as possible will have major influence on the adventures to come.

The adventure also features two dungeons, the old and the new mines, both fully mapped and especially the new mines coming with some beautiful pieces of artwork and the option to crash through the mine in a cart – very cool! On the other hand, the map of the old mine features “M”-key descriptions when it should read “n1”, “N2” and so on – a glitch that could have easily been caught. The final fight against a puppeteer hive brain is cool and sees the Pcs destroy a machine creating the psionics-weakening disturbance in the flow and, depending on the PC’s performance, an exodus of the kobold populace to their city – very cool, as it features real consequences of the PC’s deeds throughout the adventure.

Also included is information on the city of Arbil, a 4-page extensive write-up of Kobolds as a playable race and an article on Duels in the Ophidian Protectorate. It is here that the 3.5-legacy indebted to Malhavoc Press’s Hyperconscious becomes readily apparent – once, the duel was a form of subcombat via Mindscapes, which was cumbersome, slowed the game to a grinding halt and was a prime example of mechanics that just don’t work well. In PFRPG, these duels as a means of advancement have been streamlined. Unfortunately to the point of being irrelevant, anticlimactic nuisances – essentially consisting of opposing rolls. Great idea, terrible execution and just as boring for the non-participating players, perhaps even more so, as any sense of tactics have left the field, amounting essentially to luck. Not even the fluff can adequately salvage this section in my opinion.

On a more positive note, we get a random monster table and compiled stats (including artworks) of the beasts herein: Brain Moles, Crysmals, Deep Hounds (regular and dire), Folugubs, Maenads and 3 kinds of puppeteer as well as temporal filchers, thought eaters and advanced wolverines makes their appearance.

The pdf concludes with an overview of the adventures to come in the arc and seem to span a wide array of different themes, which is nice.

Editing and formatting are ok, but not great – from the lack of aforementioned map to the wrong map-key, minor punctuation glitches etc., I found quite a bit to be concerned about. the 2-column layout is full-color and both maps and artworks are nice. The adventure comes with bookmarks. Damn, this one is hard to rate. On the one hand, I really like the attention to detail given with all the subquests and the fact that the PCs actually accomplish relevant things and influence the degree of success. I also like the difficulty of the adventure, for without clerics a fall of 4d6 at first levels is a rather lethal trap…

On the other hand, while the nature of the antagonists is disturbing, the box-text mostly fails to convey this fact – their nature is revealed in several boxed texts when doubt would have been more prudent. The boxed text is another point of criticism I have for this installment of the new AP – while it is by now means bad, due to the nature of e.g. the very sketchy investigation, it cannot serve to provide all the details necessary to make the whole adventure a stellar experience, requiring the Dm to do a lot of fleshing out in some parts. Essentially, this adventure feels like a 64 or 72-page adventure that has been cut down to accommodate gazetteer-like sections, which, while not bad, would have been put to better use with more details. Ksaren is an intriguing world and the AP feels completely different from all the commercial adventures for PFRPG I’ve read so far, which on the other hand is a plus – it takes quite an effort to do that to jaded yours truly. In the end, though, the sketchy nature that at times make this adventure feel less detailed than it could or should have been and sacrifices precious space to filler-material like the terribly boring section on psychic duels that describes over several aptly-written pages of fluff-text how people psionically stare each other down via opposing rolls.

Add to that the rather massive map-glitches as well as the extremely clichéd beginning of the adventure and I can’t bring myself to recommend this adventure as universally as I’d like to – if you’re willing to invest work into the side-quests (making them more than fetch-quests etc.) and add details, this is a great start for an AP in a cool world that feels different. If you’re looking for go-play, this is not for you. This AP has potential galore and I hope the guys at DSP can make the saga realize it – as for the first installment, as much as it pains me, I initially felt I’ll have to settle for a final verdict of 2.5 stars, but that would be wrong as well – the adventure, after all, IS good, feels very distinctly different and comes with some very cool ideas. Thus, I’ll settle for a final verdict of 3.5 stars, rounded down to 3.

Kingdoms of Legend: The Hidden Threat is available from: