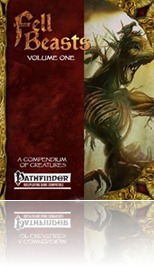 First of all, I do know that this book has been published in the very beginning of PFRPG and thus suffers from some problems of the first publications for any system. I picked this along the other books up at a fire-sale and thus didn’t pay full price. The 3 fell beasts-files have since been lying around on my HD and I only recently unearthed them. So, how well has this book aged? Let’s take a look at the critters:

Air jellies are swarming critters that gather in swarms. I didn’t get they are not poisonous and they lack the swarm traits they ought to have. The blistering demon has a cool aura, but the mechanics could have been clearer – as written, once you catch fire you can’t extinguish it for 1d4 rounds. While sound in theory, I don’t see it working in game due to means to quench fires. Additionally, the abilities are too fire-centric and non-damaging for a CR 15-enemy. Undead-creating Canopic Jars are the one monster in this book I really liked – great idea and they haven’t been done yet. Dread Waif is yet ANOTHER take on the creepy child. Although I admit to liking the fluff, I was not impressed by the mechanics: Fear and Despair? Yawn. But wait: The radius of the despair-aura is 1 MILE. This fey (not undead, mind you) can literally drive whole settlements insane in a matter of days. While I don’t like that it#s a fey (just feels undead to me), the creature DOES make for a cool plot-villain due to this fact. Ghissics are wasp-like creatures that implant deadly larval eggs. I’ve seen that trope done better and creepier in e.g. 3.5’s Hyperconscious. Greenmold Bones are undead infused by druidic magic. When hit by weapons, they penalize the weapon. Why this moldy infestation cannot be treated by anything but a craft-check, I don’t know and frankly don’t get. The ability feels weirdly disconnected from what should probably be a kind of poison or disease aura. Mercy Flowers trap their victims in illusory worlds and make for nice fey plants. Riverwraths are rather bland aquatic, troll-like fey. Shisa are a take on the foo dog/lion and lack a signature ability – yes, they are ok, but I felt they missed something unique. Finally, there’s the Wicker Man. “AAAAHHH, NOT THE BEEESSS”. Sorry. Couldn’t resist. The problem here is, that e.g. in contrast to the 3.5-Fiend Folio version of the creature, the creature can’t imprison enemies and no benefits/aura for being set afire are given, which I always considered the coolest thing about the creatures. Also, it’s a construct sans creation notes.

Layout is rather subpar, with several pages only half-full with text, resulting in wasted paper, especially annoying due to the b/w-parchment-look in the book. Most creatures could have used another pass at editing – the job was done shoddily at beast, with some typos, punctuation errors and more importantly, problems with the stat-blocks and abilities, rendering the use of the creatures harder than it ought to be. The b/w-artworks are mostly nice, though there are some rather boring ones among them. *cough* Mercy Flower, Riverwrath *cough*While the ideas for the critters almost all rock, I found a problem with either an ability that didn’t strike my fancy mechanics-wise or a formatting glitch. More importantly, for the price you can get several vastly superior similar products – Book of Beasts: Monsters of the River Kingdoms just as one example. If you’re willing to pay a bit more, I’d suggest Urban Creatures & Lairs by 0onegames or one of the excellent books by Alluria Publishing. Thus, in spite of the good ideas, my final verdict will be 1.5 stars, rounded down to 1 for the purpose of this platform.

Fell Beasts: Volume 1 is available from: