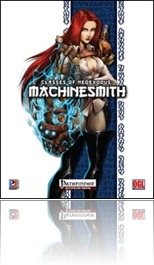 This pdf from LPJ Design is 22 pages long, 1 page front cover, 1 page SRD, 4 pages of advertisements, leaving 16 pages of content for the new, revised Machinesmith-class, so let’s check this one out!

The Machinesmith is a new base-class that gets d8, 4+Int skills per level, proficiency with light armours, greatworks-weapons (see below), simple weapons and repeating crossbows, a special kind of spellcasting (again, see below) of up to 6th level and medium BAB as well as good fort and ref saves.

The spellcasting of the Machinesmith is tied to INT and works pretty much like a wizard’s spellcasting, but with some tweaks – essentially, they create small devices from blueprints, so-called prototypes which duplicate spell-effects. These and other abilities of the class are powered by the machinesmith’s inherent magical energy, the mobius energy. Machinesmiths can create blueprints from magical spells they encounter, but wizards cannot extrapolate spells from blueprints. Prototypes also use costly materials if the spells they’re based on do so . Prototypes remain active for only a day and can exclusively be used by the machinesmith that created them. Making a prototype takes one minute and in contrast to wizards, a machinemsith can thus e.g. leave a significant part of his daily prototype-allotment uncreated and make them as the adventuring-day requires them.

Additionally, a machinesmith creates a greatwork at first level, which improves over time. The machinesmith can choose from 3 different greatworks that automatically improve over the levels, with the first being the Analyzer: Most of its abilities work on a at-will-basis, while other use up charges. An analyzer has 3+Int mod-charges that automatically recharge every day and over the progression of the class, add progressively more sensorial enhancements to a machinesmith’s arsenal. Starting with humble detect-spells, the analyzer get more and more divination-style-abilities. It should be noted that the analyzer has received a major overhaul – it now mostly uses charges (a godsend to DMs who don’t want XYZ numbers of divinations to constantly track) and has gotten some neat new tricks, but more on them later

The second choice is the Mechanus, which could be considered an equivalent of the a summoner’s eidolon. 4 base-forms are available (humanoid, aquatic, serpentine, quadruped/tracked/wheeled) and the Mechanus gets 15 HD over 20 levels, +15 BAB, +5 saves, up to +11 AC-bonus and a str/dex-bonus of +8 during the course of their progression. A mechanus also get 3 major upgrades which include a breath weapon-style cone at 15th level, which makes the mechanus devastating against minor foes. It should also be noted that the mechanus can be made larger and later changed. The mechanus now caps in size at huge. It should be noted that the destruction of the mechanus requires it to be re-crafted and costs money. And that machinesmiths get the ability to use an improved version of mending via his/her repair-ability, usable 3+int-modifiers per day, thus potentially making the team Machinsesmith/Mechanus a deadly force.

The final choice the Machinesmith gets is adding a mobius core to a weapon, thus creating a weapon of terrible destructive capabilities. On a basic level, the weapon comes with Int+0.5 x class-level charges and could e.g. utilize these charges to grant temporary access to a selection either melee or ranged feats while wielding the weapon. With the respective upgrades, the Machinesmith can add more feats to the respective feats available and choose multiple feats at the same time, as well as using charges to get luck bonuses and even expending charges to confirm critical hits automatically at higher levels.

Machinesmiths, in case I’ve forgotten to mention that, are good at dispelling magic via their Axiom ability.

That’s not all, though: The Machinesmith gets more craft-feats and at 7th level, can transform prototypes into dispel magic-like effect. Also, the machinesmith gets access to a selection of gadget-tricks, some of which are augmentations for their greatworks and can only be taken by those having the respective greatwork.

A total of 24 different gadgets are included in the deal and feature e.g. turrets than can be fitted out with different kinds of crossbows. The turrets can be further upgraded to have multiple ones and increase the magazine-capabilities of the individual turrets. Also included in the selection is the option to fire explosive ammo via mobius weapons, creating an invisibility cloak a magnetic grappler that can use telekinesis on metallic objects, the option to boost your mechanus into overdrive an even alchemist-fire-powered portable ornithopters! Especially the latter is an awesome gadget in its iconicity. I am happy to report that the analyzers have received a bit more love via these gadgets and may now steal spells they successfully dispelled. While I still prefer the Mechanus and the Mobius Weapon, now I can see someone taking the analyzer.

After that, we are introduced 14 new spells for the machinesmith, which includes tiny bladed drones the machinesmith can redirect to attack other foes. The tiny drones can be destroyed btw. Other examples include alchemist’s fire clusterbombs, irritating guardian drones, force shackles and a music box that spits out tiny constructs each round. Thankfully, the utterly broken “Hand of the Marksman” has been replaced with better, new spells and the drones now have all the information necessary to run them, which makes these spells awesome! This section has seen massive revision and now ROCKS!

LPJr Design is not pulling any punches here: The last bits of crunch depict now 4 archetypes instead of the original 2, the Bombardier and the Technologist. The bombardier gets bombs like the alchemist instead of a greatwork and now comes with all necessary information. The Technologist capitalizes on the science vs. magic-trope and can, by explaining his disbelief, grant his spellcraft as a save to his allies much like the bardic countersong, but less limited. The technologist may also grant himself spell resistance by expanding his repair uses. The formerly broken automatic resistance of his creations has been nerfed by making the components illegible to being enchanted or the creation of magic items. but what are the new ones? The Arcanamechanist is an archetype exclusively for machinesmiths with the analyzer and represents a machinesmith searching for lost, arcane technology. To reflect this, he can use Mobius energy to enhance e.g. wands and staffs, apply metamagic effects to spells cast from wands by expending additional charges and later even to scrolls. I liked the archetype, no balance-concerns on my behalf. The second new archetype is the combat engineer – proficient with medium armors and weapon training, this archetype represents the frontline tinkerer and thus gets e.g. better initiative, and the option to quickly activate gadgets and greatworks, but also diminished prototypes and no axiom-ability.

Even better, we now also get a new 10-level PrC, the Transmechanical Ascendant, who gets full BAB, medium fort-saves, 9 levels of prototype progression) and who seeks to become a machine by implanting a mobius core into his body and slowly turn less human and more like the machines he seeks to emulate. The PrC is a nice metamorphosis-class and comes with 2 new machinesmith tricks and unfortunately also the only remaining, but rather major blunders I could find in the revised version of the Machinesmith: The PrC lacks information regarding its Hit Dice and its skills-per-level, which constitutes a major blunder.

The pdf closes with a description on how machinesmiths work in the world of NeoExodus.

Editing and formatting have been thoroughly revised – Jeffrey Erwin has done a great job and made the whole pdf clearer, more appealing and much more professional. Layout is beautiful, adheres to NE’s full-color 2-column standard and the original pieces of full color artwork by Carlos Herrera Portilla are beautiful. The pdf now comes with extensive bookmarks, which is awesome. Clockworker/tinkerer-classes are notoriously difficult to do and the machinesmith, a kind of spiritual successor of HHG’s Clockworker tries very hard to do it. Now, in the revised edition, I’m extremely happy to report that the pdf actually succeeds in bringing us all a tinkerer-class with rock-solid rules, iconic options galore and cool ideas. ALL of my major complaints have been addressed, the formatting glitches (italics etc.) have been purged, wording has been clarified AND new content has been added. Quite a lot of it, actually! And quality content to boot! In fact, now this pdf actually can be considered a must-buy among the classes out there and I’d immediately go 5 stars plus seal of approval – were it not for the lack of HD and skill-info in the new PrC, which cost this pdf a star for a final verdict of 4.5 stars. I hope to see more of Jeffrey’s excellent work in the future and am quite impressed that the team of LPJr Design has managed to pull this class off in the revised edition!

Classes of NeoExodus: Machinesmith (revised) is available from: