This pdf from LPJ Design is 18 pages long, 1 page front cover, 1 page SRD, 4 pages of advertisements, leaving 12 pages of content for the new Machinesmith-class, so let’s check this one out!

The Machinesmith is a new base-class that gets d8, 4+Int skills per level, proficiency with light armours, greatworks-weapons (see below), simple weapons and repeating crossbows, a special kind of spellcasting (again, see below) of up to 6th level and medium BAB as well as good fort and ref saves.

The spellcasting of the Machinesmith is tied to INT and works pretty much like a wizard’s spellcasting, but with some tweaks – essentially, they create small devices from blueprints, so-called prototypes which duplicate spell-effects. These and other abilities of the class are powered by the machinesmith’s inherent magical energy, the mobius energy. Machinesmiths can create blueprints from magical spells they encounter, but wizards cannot extrapolate spells from blueprints. Prototypes also use costly materials if the spells they’re based on do so . Prototypes remain active for only a day and can exclusively be used by the machinesmith that created them. Making a prototype takes one minute and in contrast to wizards, a machinemsith can thus e.g. leave a significant part of his daily prototype-allotment uncreated and make them as the adventuring-day requires them. Additionally, a machinesmith creates a greatwork at first level, which improves over time. The machinesmith can choose from 3 different greatworks that automatically improve over the levels, with the first being the Analyzer: Most of its abilities work on a at-will-basis, while other use up charges. An analyser has 3+Int mod-charges that automatically recharge every day and over the progression of the class, add progressively more sensorial enhancements to a machinesmith’s arsenal. Starting with humble detect-spells, the analyzer get more and more divination-style-abilities.

The second choice is the Mechanus, which could be considered an equivalent of the a summoner’s eidolon. 4 base-forms are available (humanoid, aquatic, serpentine, quadruped/tracked/wheeled) and the Mechanus gets 15 HD over 20 levels, +15 BAB, +5 saves, up to +11 AC-bonus and a str/dex-bonus of +8 during the course of their progression. A mechanus also get 3 major upgrades which include a breath weapon-style cone at 15th level, which makes the mechanus devastating against minor foes. It should also be noted that the mechanus can be made small and later changed. Bonus-Hp of large and huge-mechanus models are given as well, as the mechanus can be increased in size up to three times in their progression. Unfortunately no bonus-HP-rules for gargantuan mechanus-creations are given (Starting at medium, 3 size-increases would make for that – small ones would have become huge…), making me think that there’s either a cap (which has not been mentioned) or that the information was omitted. It should be noted that the destruction of the mechanus requires it to be recrafted and costs money. And that machinesmiths get the ability to use an improved version of mending via his/her repair-ability, usable 3+int-modifiers per day, thus potentially making the team Machinsesmith/Mechanus a deadly force.

The final choice the Machinesmith gets is adding a mobius core to a weapon, thus creating a weapon of terrible destructive capabilities. Ona basic level, the weapon comes with Int+0.5 x class-level charges and could e.g. utilize these charges to grant temporary access to a selection either melee or ranged feats while wielding the weapon. With the respective upgrades, the Machinesmith can add more feats to the respective feats available and choose multiple feats at the same time, as well as using charges to get luck bonuses and even expending charges to confirm critical hits automatically at higher levels.

That’s not all, though: The Machinesmith gets more craft-feats and at 7th level, can transform prototypes into dispel magic-like effect. Also, the machinesmith gets access to a selection of gadget-tricks, some of which are augmentations for their greatworks and can only be taken by those having the respective greatwork. A total of 24 different gadgets are included in the deal and feature e.g. turrets than can be fitted out with different kinds of crossbows. The turrets can be further upgraded to have multiple ones and increase the magazine-capabilities of the individual turrets. Also included in the selection is the option to fire explosive ammo via mobius weapons, creating an invisibility cloak a magnetic grappler that can use telekinesis on metallic objects, the option to boost your mechanus into overdrive an even alchemist-fire-powered portable ornithopters! Especially the latter is an awesome gadget in its iconicity.

After that, we are introduced 11 new spells for the machinesmith, which includes tiny bladed drones the machinesmith can redirect to attack other foes. The tiny drones can be destroyed btw. Other examples include alchemist’s fire clusterbombs, irritating guardian drones, force shackles and a musi box that spits out tiny constructs each round. There is one feat included in the deal, though, which I consider potentially op: Hand of the Marksman, a third level spell, makes your next gun or crossbow attack automatically hit (!!!!) AND threaten a critical hit. With high-level mobius-weapons, that can potentially GUARANTEE critical hits. That’s op. Not gonna happen in my campaign and needs some serious nerfing. Also, unfortunately no information on the saving throws of the drones are given, which is another major blunder. Are they affected by area attack like fireballs? If so, do they use the machinesmith’s saves or worse ones?

The last bits of crunch depict two archetypes, the Bombardier and the Technologist. The former gets bombs like the alchemist instead of a greatwork, but the paragraph that explains how they work has been cut off, making this archetype impossible to use as written – . The Technologist capitalizes on the science vs. magic-trope, gets less prototypes, but can use his prototypes to counter magic. Unfortunately, this mechanic is faulty, as it lacks information on what action is required to counter the magic effects. Worse, at higher levels they and their works gain a resistance bonus equal to the CLASS-LEVEL on saves. At 11th level, when this becomes available, that’s +11. On all saves. For the Machinesmith, his gadgets and his mechanus. Now if you don’t consider this to be broken as all hell, I don’t know what is.

The pdf closes with a description on how machinesmiths work in the world of NeoExodus.

Editing and formatting are lacking. While not abysmal, I noticed e.g. missing blanks, a superfluous “X” at the end of a word which I first considered to be a multiplier and then there’s the missing paragraph in the bombardier. Layout is beautiful, adheres to NE’s full-color 2-column standard and the original piece of full color artwork is beautiful. The pdf has no bookmarks, which is a minor bummer. Clockworker/tinkerer-classes are notoriously difficult to do and the machinesmith, a kind of spiritual successor of HHG’s Clockworker tries very hard to do it. While I have less problems and tricky options like turrets and the mechanus are covered, I’m not happy with how this pdf turned out to be. While the option to make drones spells gets rid of a lot of the clockworker’s drone-related problems, they still lack crucial information (SAVES!) in combat. The spells, as I’ve come to expect from LPJr Design, brim with great ideas and cool imagery, but e.g. the “Hand of the Marksman” is BROKEN. Disallow it, unless you’re going for the munchkin route. The ball has been truly dropped n the archetypes, though: From missing paragraphs, to missing information on the actions abilities take to an UTTERLY broken ability, these two are ill-conceived and need some serious reworking before I’d let them anywhere near my campaign. There’s also another aspect I’d like to mention: The Analyzer SUCKS. “Hm, what am I going to take? Constantly spamming detect-spells and similar vision-based spells that annoy the hell out of my DM or the improving construct or the cool weapon that grants me access to a plethora of feats?” The analyzer desperately needs more going for it – terrain-analysis, perhaps “Hand of the Marksman” that uses up a vast amount of charges, some kind of reroll – anything really to make it more appealing in comparison to the other two, vastly superior and cooler greatworks. More gadget tricks or the like. Something. As written, it falls painfully on the boring side, which is doubly apparent when compared to the vastly superior other greatworks. Also, taking the spell-route on the drones somewhat feels like a cop-out to me, but apart from the missing saves, I do enjoy them. Another option is miss is the one to make your mechanus a kind of tank that the machinesmith can ride on. When directly compared to the Clockworkers customization-options, I couldn’t help but feel that the mechanus somewhat is less than it could have been.

Why am I harping on these blemishes the way I do? Because they tarnish what could otherwise clearly be a stellar, awesome class. The editing glitches that make some parts unusable have to be taken care of and, at least in my opinion, the mechanus could use some additional options. The archetypes need a serious overhaul to work even remotely the way they’re intended to. I really hate doing this. But adding all of the bits and pieces together, the per se solid base-class is dragged down by the sum of the problems. I’ve been thinking for quite some time and can’t bring myself to rating this higher than 2.5 stars as long as the problems persist. As soon as editing and balancing blunders have been taken care of, I’ll gladly add missing stars to what could otherwise be considered a stellar class.

Classes of NeoExodus: Machinesmith is available from:

If you have enjoyed this review, please consider donating a small amount of money to help support this website. Thank you for your support! 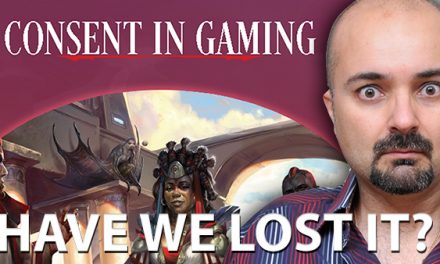 Consent in Gaming – Have we lost it?