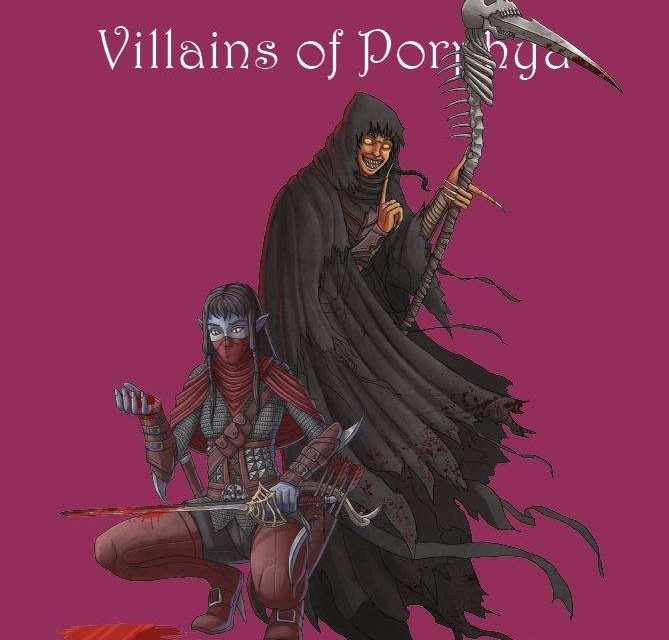 Villains of Porphyra clocks in at 52 pages, 1 page front cover, 1 page editorial, 8 pages of SRD, leaving us with 42 pages of content, laid out in 6’’ by 9’’, pamphlet-style, which theoretically allows you to fit up to 4 pages on a sheet of paper, should you choose to print this supplement.

So, Villains of Porphyra, what do we get in here? Well, basically what it says on the tin – this is no NPC Codex-style supplement that presents nameless adversaries and mook-fodder, but instead should be considered to be a collection of named and framed villains, ready to wreak havoc on your PCs. This obviously means that they all get their own piece of aptly-written prose, as well as statblocks, with the latter making use of Porphyra’s impressive cadre of creatures, races and content in general. Note that you do not need to own Porphyran books to use this, though! There is also a pretty neat Porphyra wiki, just fyi!

A total of 16 dastardly villains are provided within, so let’s take a look, shall we? For brevity’s sake, I am going to assume a degree of familiarity with Porphyra’s lore and races – should you be intrigued by the unique Patchwork plant, click on the “Porphyra”-tab of my review on my homepage, and you’ll have a list of files (and reviews) depicting more in terms of both crunch and lore.

We begin this supplement with Lady Daivona Scovalyx, a CR 17 inveigler erkunae investigator (mastermind) of the amazing erkunae race, still one of my all-time favorites of the setting for the cool, old-school non-Tolkien-ish vibe they have (Vance,Moorcock); anyways, she comes, as befitting of her stature, with her own pact creature (think: racial kinda-familiar), and is followed by Vsehnian, the Betrayer – a CR 11 dhosari rook; dhosari are btw. the servant race of the erkunae, but this clever individual, though aligned with Daivona, can make for a potent foe on his lonesome, clocking in at CR 10.

Brin is more straightforward, and is a CR 10 hobgoblin assassin (amking use of the Porphyran take of the class). Khorg the invincible would be a CR 19/MR 2 invincible half-ogre runereaper, and his damage output potential…well, let’s just say it’s nothing to sneeze at! Abil Copperborn would be a half-human (one further instance where Porphyra’s pretty cool…) skirmisher ranger at CR 15 – loyal and professional, he is actually LN and one of the most potent and skillful contract killers you’re bound to find. His writeup also features the scarf of camouflage item. Qippal Rillkeeper is a grippli hunter (primal companion) at CR 8, bonded to a dinosaur and victim of brutal and ruthless human “safaris” slaughtering all the once innocent frogfolk knew. Bad idea, humans. Bad idea…

Fhemish Darggun is a half-cyclops archaeologist bard at CR 16 – the most ruthless weapon’s fence and dealer of Giant’s Retreat – who, ironically, really likes civilization, even though his trade could potentially be considered to be contrasting with its establishment, or, more importantly, maintenance.

Fulgra the hungry would be a CR 10 wolf-shifter and we also learn about Bonebreaker Essrass, a CR 17 nagaji martial artist monk that can strike as a serpent… Ouch, all right, totally deserved that. 😉

Anyways, we also get to meet Kresta, a tengu unchained ninja seeking for the means to create conflagrations to starve and annihilate the land in favor to her divine master…Lady Gloam of Bhaal-aak made me smile, for here, Justin Sluder pulled out his skills: She is a stealthy creature plumekith assimar warpriest (CR 19), kidnapped and then raised and indoctrinated in the city of shadowy demon-worshipers…and yes, she sometimes visits her parents. Conversations are bound to be awkward, but that’d make for an interesting scene to roleplay…

Ursk the defiler would be a CR 9 skulk oracle, who champions, in a twisted way, freedom. Freedom from fear. Dignity. Reason. Life. With darkness-themed abilities and vampiric tricks, this fellow is twisted in a cool way. At CR 16, master Gyro is a boggle spell specialist arcanist, comes with notes of the uncommon elf lord’s battle armor spell from kobold Press’ Deep Magic, as well as with bracers of defense item-class. I did grin when seeing the CR 10 augmented half-giant telekinesis/force specialist Brutus Half-forged and the CR 8 aberrant aegis/fighter multiclass from duergar stock Rosca Hatemonger. We end the supplement on a definite high note, with Ibuel the Frightlover, a fey creature xeph dread with 15 levels and CR 16.

The pdf comes with a bonus file depicting the Agropelter, penned by Mark Gedak and Perry Fehr, a CR 3 fearsome critter magical beast, a wiry apelike thing whose arms have no middle joints, capable of quick bursts of speed. Solid creature that makes for a nasty artillery at low levels.

Editing and formatting in Villains of Porphyra are very good, I noticed no excessive accumulation of grievous glitches. Layout adheres to a 1-column standard, is pretty printer-friendly and sports the classic purple highlights. The pdf has no interior artwork. The pdf is fully bookmarked for your convenience and ease of navigation, though the bookmarks don’t note the CRs, which, since the villains are listed in no order I could glean, represents a slight usability detriment when in a pinch.

Justin P. Sluder and Aaron Hollingsworth make for a good team, at least judging by this pdf. Justin has crafted some of my favorite NPCs/villains ever for the Faces of the Tarnished Souk-series, and his talents at making complex NPCs shows in quite a few of these villains, though not all of them. Still, the means by which this book employs Porphyra’s rich canon of options is nice to see indeed. The villain-motivations also are surprisingly diverse, the brief flavor texts lending depth to them. If anything, I did wish more than once that we had a tad bit more space per villain to further add to their myths. That being said, the use of diverse and interesting material herein and the obvious joy in some of the combinations does render this collection worthwhile – the enemies herein *will* be challenging for your group.

And hey, you can’t ever have enough adversary-statblocks, right? Right! In short: Totally worthwhile if you’re looking for some tough foes to throw at your players! My final verdict will clock in at 4.5 stars, rounded up due to in dubio pro reo.

Villains of Porphyra is available from DriveThruRPG.

Podcast Episode – The RPG Room: Why are games so repetitive?