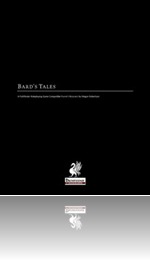 Raging Swan Press have released Bard’s Tales, a PLAYER’S RESOURCE by Megan Robertson. Compatible with the Pathfinder Roleplaying Game, the stories, tales and songs within are compatible with almost any fantasy roleplaying game system.

Bard’s Tales comes as an extensively bookmarked ten-page PDF and is available from the Paizo store, RPGNow, RPG Drivethru and Your Games Now for the great price of $1.50.

Do you want to play a bard, but don’t want to simply make a lot of boring, Perform checks? Do you want to enliven the game and breathe life into your bard’s performances?

Bard’s Tales is a rich resource of easily customisable stories, legends, poems and songs designed to bring your bard’s performances to life!

Designed for use with The Lonely Coast (a free extensively bookmarked campaign sourcebook) Bard’s Tales is easily adaptable to any campaign or game system.