History is a funny thing. It can be incredibly boring and it can be absolutely fascinating (mostly depending on the teacher. Mine were horrible!) and it can give us a sense of pride and achievement.

And it can also make us feel ashamed of our past and our ancestors. Inquisitio did that for me.

This card game is a Finnish game from Tuonela production and I was intrigued since the very second I saw the game at Spiel 2011. Talking to the designer made me *really* keen to play it and when I got it as a review copy I was over the moon.

Every round an interrogator card and a torture card are drawn. The interrogator will look for certain traits that witches have, like scars, burns, moles, being able to walk over water or being very light. If the players hold cards in their hands that have the features the interrogator is looking for, they’ll be accused of being a witch. At that moment, the player can either yield, bribe the interrogator or resist the torture and take emotional and/or physical pain. At points, the player can also confess of an act of witchcraft, like blaspheming or having a relationship with a succubus. Confession is compulsory if the torture would kill you, by the way. Oh, and if you take the pain, you earn some money.

However, confessing has an upside. You can then accuse one of the other players of witchcraft and if they have any of the traits you accuse them off, they share similar fate to yours. The game ends when the deck of interrogators has been depleted.

As mentioned three paragraphs ago, this game has a few really amazing features. For starters is semi-competitive. Although all players have a common goal, survive the interrogation, and they fight against the system, there are ways to forward the pain and distress to another player. Bribing the interrogator immediately passes the focus of such interrogator to the next player. That player can also bribe the interrogator, but the money needed to do that increases one coin every time a player bribes the torturer. After all they get greedy and have nothing to lose!

Second thing that I really liked is that, if you decide to resist the torture, although you get money for it, you also get new features that could betray you as a witch. After all torture will give you the burns and scars that the torturers look for in witches. Or make you lose weight, which is also a sign of witchcraft (as we all know!).

Thirdly, the game has only one winner and one loser. At the end of the game, the number of confessions and sings of witchcraft will be counted and the person with more points is the one who goes to the stake to be burnt. The person with less points will be exonerated. The rest… well, the game ends, but I am sure they stay in jail to be tortured again soon enough.

The gameplay is very quick. Although the turn sequence can be a little bit confusing to start with, soon enough you’ll be considering whether you need the money to bribe the torturer at a later turn, if you should confess so someone else can also take some blame and burn instead of you and, most importantly, you’ll flinch as the pain counters start to decrease and get you closer to death.

The quality of the cards is good enough, though, as with most card games, they could do with going in card sleeves to protect them from heavy use. The artwork is nothing to scream about, though is appropriately dark and gruesome, but not gory, so don’t worry about that. It does a very good job of giving you the chills about what people went through. The sight of a rather crude saw with the caption “lose a limb”, or a skull with a head-press made us wince every time. The layout of the cards is OK. Everything is visible clearly enough, though the typography is not the easiest to read at times, specially in the back of the cards. One thing I felt is that the back of the cards is so similar, that differentiating between the different decks was difficult to start with.

However this game is tremendous fun. Granted that the theme is not for everyone and, in fact, it can make some people uncomfortable. I will add that to the list of achievements. Quite frankly, if they had made light of such a horrible and repugnant organisation as the Inquisition, I would have felt very much offended. However the designer doesn’t hold back and doesn’t shy away from the brutality of the time and the methods they used.

The mechanisms are simple enough, but terribly effective and very realistic. Although there is a bit of streamlining that could be done to make the game just a bit slicker, I can’t say it needs it. As it is, this game shines as it is and is a great homage to times gone by that should never come back again. Ever. 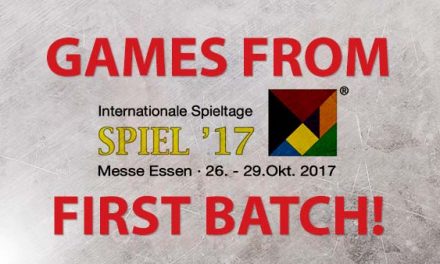 Not-always-lethal illnesses and conditions your players should be aware of! Part one!