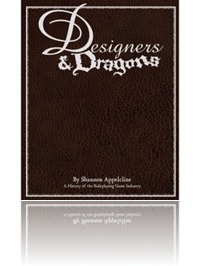 For some reason, Role Playing Games fascinate me. Ever since I got started, I just can’t get enough.

Ever since I started with so many many years ago with AD&D, Call of Cthulhu, Vampire: The Mascarade, Rolemaster, Paranoia and anything else I could get my hands on. I couldn’t get enough!

Having said that, the RPG industry in Spain was a lot different than it was internationally. We had a limited number of games that were translated, distribution was dire and everything arrived years later than in the rest of the planet. However, we were exposed to some games that barely ever made it out of Spain, even though they were (are!) fantastic games, like Aquelarre and Mutantes en la Sombra (Mutants in the Shadows). That limited my exposure to the international scene and industry politics that everyone else who’s been for a while into the industry is so aware of.

Thus, when I heard about Designers & Dragons from Mongoose, I downloaded it right away. I started to read it and after a while I had to stop. I just couldn’t continue.

I had to go and buy the paper version of the book. My fascination with role playing games has increased by understanding the politics and history behind them.

Designers & Dragons is, in a nutshell, a not-at-all brief history of the industry. In detail. The author, Shannon Appelcline, has spent five years collecting an incredible wealth of information and then presents it in well structured chapters. Lots of chapters.

The layout is not very imaginative. Two columns and sometimes a spread that takes the two columns, breaking the page somewhat. The artwork is taken from the covers of some of the games published by the companies described. The rest is not inspiring, but it does the job and, to be honest, this book is not about looking pretty, is about providing information and unbiased content.

The content is truly amazing. The amount of companies Appelcline goes into is huge. 62 if I remember correctly. Starting with the start, TSR and D&D, and coming all the way to the present with the likes of Cubicle 7, Evil Hat Productions and Catalyst Games. All of them described in some detail, which is the least you could expect.

The geneses of the companies is taken care of, but also the relationship between companies, the personalities that started and sometimes ended them, and how they all intermingled, affected each other and changed as time went by.

Divided in relevant episodes, the book also takes us through in a chronological order, but without loosing track of the changes that would happen in the future. Thus, understanding and getting to grips with events that would unleash changes later on, is also very easy.

I never got lost reading this book. Although there are some typos here and there, he book has been well written enough that a dyslexic like myself didn’t have too much trouble reading it either on paper or in my iPad. Every chapter makes perfect sense and the information is always relevant and, most importantly interesting.

I can’t recommend this book enough. I kid you now when I tell you I have it on my desk at work and it’ll remain there so I can flick through the pages when I have some downtime.

My only request from the guys at Mongoose: please don’t wait another 30 years to write another!

Designers & Dragons is available from: