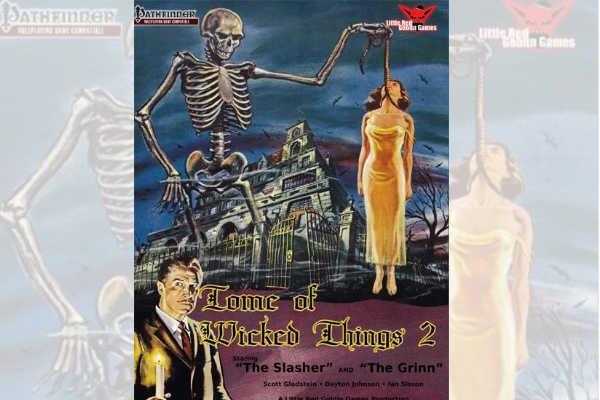 We begin Tome of Wicked Things 2 with the slasher base class, intended to allow for GMs to duplicate the gruesome sprees of Jason, Michael Myers etc. The base class receives d12, 4+Int skills per level, proficiency with simple and martial weapons as well as light and medium armor, full BAB-progression and, interestingly, good Will-saves. Slashers obviously need to be evil and are intended primarily as antagonists. A slasher begins play with the accursed ability, which nets a pool of curse points they can use to power their class abilities. Said points are interesting in that they can hold up to 2 times class level + Charisma modifier. They get +1 curse point when they see a creature die, +2 if they kill it themselves. Curse points refresh at the stroke of Midnight. I’d usually start my kitten-test-schtick right now…but in the case of this class, that seems kind of stupid. Yes, slashers WOULD kill kittens to replenish curse points.

Slashers instinctively understand every language, but cannot articulate any, being relegated to grunts, moans and the like. Also at first level, the slasher chooses a tragedy from 6 presented – these can be likened to bloodlines or orders in that they modify the list of class skills and, in some cases, proficiencies. Each such tragedy confers multiple boons upon the slasher, but also an array of weaknesses. Let’s take a look at “Cursed One”, as an example: These guys receive SR 11 + class level as well as an oracle’s curse (with tongues being not allowed – nice catch!) – but weakness-wise, being targeted by a hex temporarily inverts their fast healing, dealing damage instead (this could be a bit more clearly spelled out) and wielding magic weapons whose bonus exceeds 1/3rd their level similarly sabotages their fast healing. Finally, each slasher has a preferred target – here, that would be any creature with a CL or at least 1 SP.

Knights of hell receives a mount and heavy armor (and tower shield) proficiency as well as an upgrade for the infernal template at 4th level. They are weak to holy symbols and good weapons and target non-evil creatures. The remorseless killer triples the amount of bleed damage caused and instantly kills creatures reduced to 0 HP, but they are weak to law-aligned weapons and symbols and target such creatures. The restless avenger never grows tired and needs no sleep and gains Endurance at 1st level. Any damage caused by the slasher renders the target tired for 3 rounds. They are weak to chaotic-aligned weapons and when they are reminded of their first act of vengeance…or subject to the tolling of bells. The seeker of power can duplicate a limited array of spells from the sorceror/wizard-list via curse points. Unfortunately, the ability is not specified as SP and thus, I have no idea which attribute governs the saves – I assume Charisma, but I’m not sure. If the slasher casts spells thus, he does take damage, though. They are weak to silver/cold iron and target outsiders. Finally, there would be the tortured child tragedy, which is immune to fear effects and increases the DC of such effects caused by +2. The tragedy also grants a level-based bonus to atk and damage versus creatures that are smaller. Their healing is inverted when hearing a baby cry, when they’re confronted with a memento/effigy of the torturing parent and they target humanoids.

Also at 1st level, slashers receive a calling card – this has a 60 ft.-radius: Torches may double effectiveness and turn into weird colors. Weird melodies (Freddy comes a-knockin…) can penalize concentration, the chill of the grave or water turning into blood – these effects are not subtle…but they are cool…and can be suppressed as a swift action. Also at 1st level, the slasher receives a weapon of grief, in which he is automatically proficient. When wielding this weapon, slashers may expend one curse point to deal + Cha-mod damage versus good-aligned creatures noted in the preferred target-line of his tragedy.

At 2nd level, the class can deliver a single attack as a full-round action – if the attack hits, he deals 1 point of attribute damage or bleed damage, increasing by +1 at 5th level and every 4 levels thereafter. He may also expend curse points equal to the amount of this damage inflicted to accompany the first attack of a full attack to add said effect to the first attack. This ability could be  a tad more precise in its wording. At 2nd level and every 4 levels thereafter, the slasher may choose one of the talents of the class: These include more weapons of grief, Bleeding Critical, hideous laughter (not properly italicized) as a curse point-based SP. (Yes, this one gets SP and CL right.) One talent also allows for instant healing as a response to seeing a nearby creature killed. Literally feeding on fear (and even healing via fear) and an option to go unnoticed as well as the option to hamstring foes can be found herein. And yes, with the right talent, slashers can detach their head or double the range of their calling card. Off-screen teleportation into a hiding place/concealment is represented by curse point-based dimension door, oddly not codified as Sp, but as Su, which means that CL-info and the like is slightly problematic here. Higher level slashers may deal both attribute damage and bleed damage at once. Oh, and there would be the option to force killed targets to emit a scream, resulting in AoE-demoralize. Invisibility as an SP is also nice and a second calling card is fun as well. Hunting down specific creatures and reflexive teleport to stand behind doors, curtains etc. complement some cool, if not always perfect abilities.

At 3rd level, the slasher  gets a scaling short-range fear aura. At 4th level, the slasher gains fast healing 1 as long as he has at least 1 curse point. Fats healing increases by +1 at 8th level, +1 every four levels thereafter. The inversion of fast healing noted in the tragedies deals twice the fast healing’s amount as damage, btw. 5th level nets 30 ft. lifesense (blindsight, only for living creatures) and 10th level provides 1/day a free reflexive raise dead. As a capstone, this rising from the grave instead works via true resurrection within minutes (instead of raise dead’s hour-countdown)…oh, and the slasher sends his victims straight to an evil-aligned underworld…and killing creatures nets the slasher HD of creature killed  x2 HP.

The pdf also introduces a new races, the Grinn – 7ft. tall boogeymen with elongated limbs and digits and look somewhat like walking corpses – they may be rather eloquent…or brutal killing machines. Grinn obviously are fey, suffer from light sensitivity, get low-light vision, darkvision 60 ft and get +1 to Intimidate and Knowledge (Nobility), which also are always class skills for them. This can be replaced by more nasty grims that champion slaughter with 2 1d4 claw-attacks – I assume the default her, but specifying primary/secondary would have been nice. Their defining, eponymous feature, though, would be their dreadful smile. This is a mind-affecting fear-effect that works like a gaze attack and causes targets to be temporarily shaken, with a hex-24-hour cool down, but also scaling DC. Nice balance between keeping the gaze relevant and preventing spamming here. The race does feature age. height and weight-tables, which is neat to see. The pdf also sports 4 feats for the Grinn, which unlock a smile that panics/paralyzes at balance-wise appropriate levels (kudos!), free Intimidates after hitting with both claws and the scent-quality, but only for creatures suffering from fear-effects.

Editing and formatting are okay, though I’ve seen Little Red Goblin Games do better in that regard – there are some typos, abilities not properly classified as SP when they obviously should be that and similar minor hiccups in the rules-language, though admittedly, they tend not to influence the feasibility of the respective material. Layout adheres to a solid two-column full-color standard and the pdf comes fully bookmarked for your convenience.

Scott Gladstein, Dayton Johnson and Ian Sisson have crafted a book… that I like more than I should. Quite frankly, this book hits a couple of things that usually irk me to no end – small imperfections that just…gall me. But know what? For once, I honestly don’t care that much. Why? Because I’m a huge horror-fan (d’uh!) and have seen more slasher-flicks than I can shake a stick at – actually, I’ve analyzed quite a few of them properly…but that’s for another topic. The slasher herein is interesting, because it captures rather well in mechanic terms how those killers operate. The class also does a great job mirroring the impeccable advance of the slasher, meaning the class can work in player hands in an evil game…though its class featured can be cheesed…by design.

The odd thing here is that I’m not 100% positive whether this is aimed at players or at GMs – for the GM-side, the class may actually be a bit too balanced for its own sake. For the player-side, I abhor the kitten-cheese of curse-point-replenishment, particularly when an easy tying of the curse point replenishment to the tragedy’s preferred victims would have offset that. Similarly, I love the more creative, narrative weaknesses (tolling of bells, etc.) but while I consider the alignment-based ones balance-wise justified, they fall somewhat behind in visuals and potential. This class leaves me very much torn.

Regarding the grinn – well, here, I have nothing to complain: The race should work in all but the most low-powered of games and is evocative in its fluff. While I wished it had some FCOs for good measure, I enjoy the race and look forward to using it when I one day get to run e.g. Richard Pett’s The Blight.

How to rate this, then? See, here, things become VERY difficult for me. Craftsmanship-wise, there is a lot to love…and quite a bit to dislike as well. So I’ll leave this up to you, my readers: If you want perfect craftsmanship and minor hiccups in the abilities irk you, then you will probably consider this to be a 3 star-file. If you’re looking for a scavenging ground of ideas and crunchy tricks, then this will certainly deliver – for you, this will probably be a 4-star file. Similarly, if you’re playing an evil campaign and both you and your GM are fine with gentlemen’s agreements/minor modifications, this will do its job well and should be considered as a nice, inexpensive purchase. My final verdict will thus fall in-between, at 3.5 stars…and because I really enjoy the grinn and the subject matter, I will round up.

This pdf was moved up in my review-queue as a prioritized review at the request of my patreons.

Tome of Wicked Things 2 is available from DriveThruRPG.

ZEITGEIST #1: Island at the Axis of the World