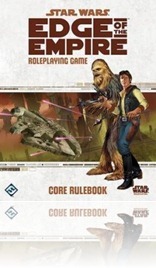 Somehow, Fantasy Flight Games has made a habit of publishing superb role playing games as well as board games. Their attention to detail and gorgeous visuals tend to be combined with a great novel approach to mechanics that tend to reflect the world around the game very well indeed. They have the common sense to count and ask people of great talent to design their games, like Jay Little.

To make matters better, they also have some excellent ideas sometimes, like the idea of creating a beginner’s game that will guide the players and GMs alike through the initial stages of setting up and playing the first game.

This is exactly what they did with the Star Wars: Edge of the Empire RPG. They also had a very well-crafted beta program to help them decide what to do with the game. Nice touch!

So this video is not just about taking a look at the components of the games, but to tell you a bit about the system and mechanics and, hopefully, help you decide if these games are for you or not.

Hope you enjoy the video!