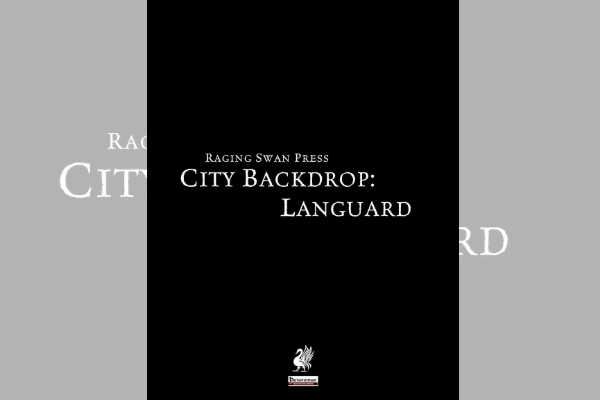 City Backdrop: Languard clocks in at 29 pages, 1 page front cover, 2 pages of advertisement, 1 page editorial/ToC, 1 page SRD, 1 page back cover,leaving us with 23 pages of content, so let’s take a look!

So, in case you didn’t get that immediately: City Backdrop: Languard is basically the MUCH bigger brother of the beloved Village Backdrops-series, and this time around, we take a look at the “crown jewel” of sorts of the Duchy of Ashlar, the region that serves as a rough geographic backdrop for many of Raging Swan Press’ more recent supplements.

Housing a population of almost 8000 souls, Languard is a relatively cosmopolitan city for the region, with approximately 1/8th of the population belonging to the classic humanoid player-races. The city does include notes on the lie of the land (interesting to note: That’s the British version of “lay of the land”), and, as we’ve come to expect from Raging Swan Press’ settlement supplements, it does come with lore pertaining the settlement that the PCs may just know. Dressing habits, appearances and local nomenclature are covered as well.

Oh, and in the PFRPG-version, we do actually get the proper city stat block information. It should also be noted that we get a nice magic item marketplace section.

Present in every iteration of this supplement would be something that put a HUGE smile on my face: Tommi Salama’s excellent b/w-cartography if provided in not one, but two versions – one that sports labels and keys, and one that is fully player-friendly! Yep, you can print out or use the city map as is sans fuss in VTTs! HUGE kudos and thanks for that!

Now, it has been a tradition in these settlement supplements, that we should get some whispers and rumors, right? Well, this time around, we get a whole page, chock full with hooks, correct and false information…and yes, these are surprisingly diverse. More bodies fished from the aptly-named Svart (which btw. translates to “Black”), rumors that provide connections in an unobtrusive manner with villages…rather cool!

Here’s the thing,though – most city supplements have an issue regarding the organization of content. Languard is very smart here: Letters denote types of location (“T”stands for “Temple”, for example), and also uses this approach to denote that some place belongs to one of the different quarters the city houses. “F”, to give you another example, means that the place can be found in the “Fishshambles.” Locations are listed by quarter, as well as by type, all on one page, which makes it rather easy to always know where what is. The pdf devotes a lot of loving care to talk about these immediately useful places, from the fortifications to the respective places. The quarters list the respective notable NPCs in fluff-only descriptions where they’re most likely to be encountered,and every quarter gets its own dressing/event table to add local flavor to the respective environments and set them apart from one another.

Beyond notes on the daily life in noisy and rather grimy Languard, we also get note son the taxes and tariffs levied in the city – an aspect all too often neglected and forgotten. Law is covered as well as all those aspects of city life that the PCs may encounter. The pdf even provides information on accommodations,food and drink prices…and goes one step further, providing designated adventure hooks to pursue, in the exceedingly unlikely case that just exploring this place won’t suffice to yield a plethora of adventures. Did I mention the human ethnicity that is discriminated against, the Takolen, who suspiciously often live near the water? The notes on means to get your PCs to Gloamhold, if they’re in the mood for a massive dungeon? From politicking to slumming, from grime and grit to cults and dangers, Languard has a ton to offer. Did I mention the guilds?

Oh, and did I mention that the city supplement comes with a handy one-page handout, the Player#s Guide to Languard? Give your players the page and map and you’re pretty much set to go, no need for hour-long explanatory rambling, no annoying need to skim through the book to eliminate possible spoilers. This is as user-friendly as can be!!

Editing and formatting are top-notch on a formal and rules-language level. I noticed no serious hiccups. Layout adheres to Raging Swan Press’ two-column b/w-standard,and the pdf sports nice b/w-artworks. The cartography by Tommi Salama is excellent. The pdf comes in two versions, one optimized for screen-use, and one intended to be printed out (YEAH!). The pdf comes fully bookmarked for your convenience.

Creighton Broadhurst succeeds at a rather impressive task: To provide an overview of a massive city in just a few pages, to depict the complexities of daily life and the differences in tone and character of the different quarters; you will not confuse any of those locations with one another, and the pdf contains enough hooks, dressing and ideas to make Languard come to life…and best of all, thereis actually a whole series devoted to going into depth regarding the individual sections of the city. Guess what I’ll be covering next? 😉 Anyhow, this supplement succeeds in presenting an overview of a city that breathes old-school vibes, that feels positively medieval. Languard sports this gritty, Greyhawk-ish vibe I enjoy; the same atmosphere that you got from the grimy cities depicted in the Witcher novels. All in all, this is an awesome city supplement,well worth a final verdict of 5 stars + seal of approval. (As an aside – this is my favorite of the 3 versions.)

Dark Sun: Fury of the Wastewalker

Review: Sentinels of the Multiverse