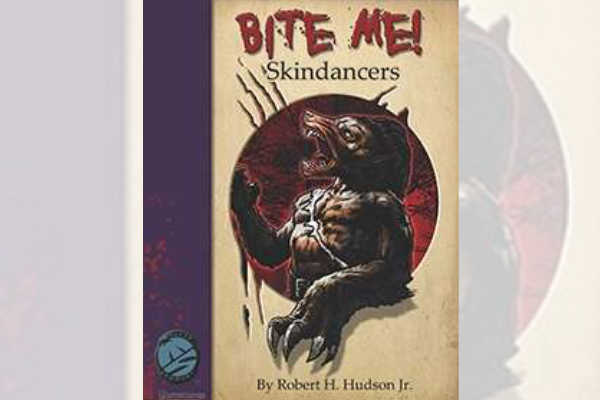 Bite Me – Skindancers clocks in at 21 pages, 1 page front cover, 1 page editorial, 1 page ToC, 1 page SRD, 1 page advertisement, leaving us with 16 pages of content, so what exactly do we get here?

In Skindancers, on the basic level, the reply would be that we receive a race – which gets +2 Dex and Con, -2 Wis, gearing it towards the physical pursuits. Not a fan of that, as I prefer races to be balanced between mental and physical attributes. Skindancers are humanoids with the shapechanger subtype and one subtype of the player’s choice and count as both for purposes of vulnerabilities to targeted effects. Skindancers are medium, have low-light vision and may use Diplomacy to influence the attitude of animals related to their chosen form, receiving a penalty to Diplomacy against other creatures with the animal type – not that you’d usually use this skill often on animals. They receive +2 to Perception and Bluff and the supernatural ability “Form of the Wild” – this allows the skindancer to assume the form of an animal eligible as a druid animal companion. Changing form is a standard action that provokes AoOs and is considered to by a supernatural polymorph effects. A skindancer can maintain said form for character level hours per day, which must be spent in 1-hour increments

Now the alternate form does deviate in some key aspects from a regular polymorph-effect – while  it grants the appearance, movement modes and speed as well as natural attacks size, extraordinary and special qualities, it goes further. Unlike regular polymorphs, the change also nets the skinchanger the chosen animal’s physical attribute scores, allowing for some seriously massive min-maxing potential. Additionally, the form increases in potency as if it were an animal companion, with 4th and 7th level being the most obvious candidates for improvement for most such forms. The animal form is unique to the skinchanger and thus does not allow to disguise as another creature – alas, the pdf ought to specify whether a polymorph effect’s usual +10 disguise to appear as the creature into which you morph is still gained. The alternate form also does not properly specify the interaction of equipment with the basic form – while I assume the default of equipment melding into the new form, I do think that the cool concept would have warranted a unique balancing mechanism here to offset the ridiculously powerful min-maxing possible via the alternate form – as provided, a skindancer should be a caster, since for these, the animal companion-form essentially amounts to almost free gestalting: Dump-stat physical attributes, choose an animal with good ones, get natural spell – done. Spellcasting animal of death. This is unfair towards the other players, but just the type of mindset these rules encourage.

The race does sport 6 alternate racial traits that help with minor skill-bonus exchanges and provide a means for skindancers to be small. More importantly, the traits link nicely with one gruesome origin myth of the race – basically, there have been people who skinned lycanthropes alive to infiltrate their communities. If that reminds you of George R. R. Martin’s “The Skin Trade”, your association would be the same as mine, and yes, the overall prose here can be considered evocative, with anti-Skinning skindancer racial traits that are particularly adept as scourging the practitioners of this vile rite being the example of my favorite trait herein, at least concept-wise. On the downside, this one is based on alignment, thus either imposing a bigger book-keeping on the DM or acting as a free detect alignment by means of bonus/penalty-metagaming. It should be noted that the Embrace constitutes a second origin myth for the race, providing an inherent duality as a theme, which is rather nice to see and works well with the race’s basic concept. The race also sports 3 sample builds for general concepts. The pdf sports favored class options for the classes released prior to the pdf’s release, which means it covers the APG-classes and those introduced in Ultimate Magic and Combat. The bonuses here would be okay.

We also get racial archetypes, the first of which would be the dark hunter inquisitor – instead of monster lore, the inquisitor may add Int-mod to Perception and receives a scaling AC-and save-bonus versus shapechangers, culminating in an AoE-capstone that is cool, but also very late to the party – the unique benefit here would be that allies with at least one rank in Knowledge (nature) may aid as a swift action, which would have been more interesting as an earlier ability-gain. Same goes for a unique bane gained at 14th level. Tracking shapechangers superbly via observation that doubles as magic is also part of the deal. An okay, if somewhat uninspired archetype.

The community infiltrator rogue can fool magical means of detecting the truth instead of trapfinding and gets better social skills. Okay, but nothing to write home about. Skindancer shaman oracles have their own bonus spells that replace the ones gained by their mystery. The archetype also locks you into a revelation at 3d and 11th level: The 3rd level one grants you a shield of spectral animals that 1/day nets allies either an AC-bonus or an option to heal, as decided by the ally (and sporting minor scaling) – which is awesome regarding the imagery, but kind of underwhelming regarding the potency. A slight increase in healing power or more uses per day for such a cool signature ability would have been in order – +3 AC or +3d6+cha-mod healing at 14th level are not that impressive, even with the flexibility of choice for your allies. The second revelation provides +4 Str and Con and natural armor, full BAB and free Improved Critical with a weapon/natural attack of your choice. The ability can be used for 1 round per 2 class-levels, to be spent in 1-round-increments and is pretty powerful, but also kind of limited.

Blinding bone dust and mating scent can be found among the alchemical equipment introduced herein. The new feats herein are kind of a mixed bag in my book – why? Because e.g. gaining magic AND aligned claws at the price of one feat is pretty nasty. Using Dex instead of Str for Climb and Swim is okay. On the awesome side, what about an extraordinary effect that penalizes intelligent foes for attacking you for as long as you do not initiate hostilities yourself? I like this diplomacy-style trickery. At the same time, increasing the animal form’s size by +1 is nasty when you recall all those options like reach etc. that come along with it. On the formal side, Double Bluff may allow for a second bluff-check at -5 once your firs has failed, but I have no idea whether this amounts to an immediate action or not an action – the wording does not specify an action-type and utilizes the word “immediate”, so some clarification would be in order. Nasty creatures practicing the Skinning-ritual can benefit from the Dark Dancer-mini-feat-chain, allowing for superb infiltration via the absorbed skins of your victims – including their memories in the improved versions – and yes, the capstone even allows for the access of class abilities and the like, while losing your own – this is EXTREMELY powerful and obviously belongs into the hands on NPCs, not into those of players.

3 sample magic items allow for the fooling of bane-effects, dispelling illusions and alternate forms (covering SUs via concise mechanics) and a ring that provides a general sense of pack empathy. The pdf also provides 4 new spells – one reduces a target to animal-like behavior, one has a curse that makes animals harass the target and one for faster tracking and one that improves starting attitude of humanoids. The iconic rituals provided as an origin myth, i.e. the Embrace and the Skinning, are also covered.

The pdf closes with a fully-illustrated 2 skindancers, one at level 11 and one at level 4 – both are pretty cool and come with an interesting write-up.

Editing and formatting, both on a formal and a rules-language level, are very good. Layout adheres to a beautiful two-column full-color standard and the artworks provided are original and high-quality. The pdf comes fully bookmarked for your convenience.

Robert H. Hudson Jr.’s Skindancers are very much a matter of taste and group – I can see them going either way. On the one side, the fluff of the race and its execution is pretty cool and delivers just what you’d expect and render a shapechanging race a more than viable option. On the other hand, my players would have a field-day breaking the shapechanging – the alternate form amounts to more than just a pet-like alternate form and instead provides an almost gestalt-y level of additional tricks. Especially for low-level casters made with a modicum of capability, this allows for some very nasty combos that are bound to provide some nasty tricks, especially at low levels. The basic issue I identified herein would be that skindancers try to be what amounts to 2 different types of character – at the one side, they try to be a conservative race that happens to be a shapechanger. On the other, the morally-ambiguous tricks associated with the Skinning are so powerful, they should be banned for players – allowing the latter set of abilities for PCs will end up creating problems galore.

The supplemental content provided ultimately remained a mixed bag for me – while not bad per se, I saw most concepts herein provided in other executions before – perhaps that’s the bane of the reviewer talking; perhaps I’ve seen too much, but I caught myself thinking rather often that e.g. some feats would have worked better as archetype options due to their power, whereas some archetype options ultimately left me uninspired or unimpressed. The abilities, in part, are awesome and cool, but limited use and not particularly pronounced tie-ins with the race itself did not capture my imagination.

While this does sound negative, you should make no mistake – if your campaign sports powerful races anyway and min-maxy system-mastery is less of an issue at your table, the skindancers may just be what the doctor ordered. The deviations from standard wording are few and far in-between and this pdf can provide some fun for your group. The concepts are high, with especially the evil Dark Dancer-feat-tree being inspired. In the end, the supplemental content and minor balance concerns I have mitigate some of the awesomeness herein and render this book a highly situational offering, edging slightly towards the good over the problematic. My final verdict will hence clock in at 3.5 stars, rounded down to 3 mostly due to the balance-concerns I have and the power-level of some options herein feeling off.

Bite Me – Skindancers is available from DriveThruRPG.

Midgard: Player’s Guide to the Crossroads

Article – Don’t take me for granted. Not fair.