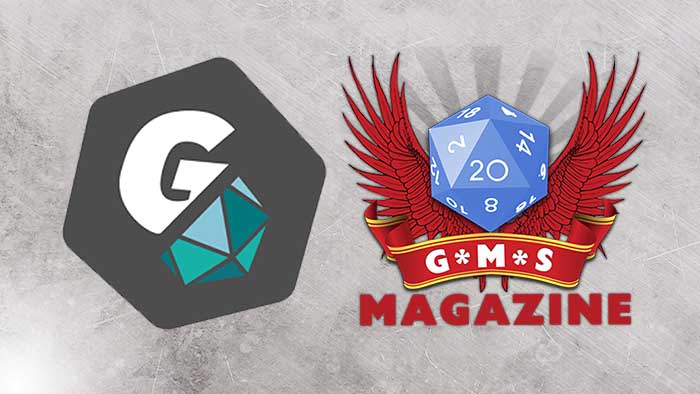 We are delighted to announce a partnership between Game on Tabletop and GMS Magazine which will be of benefit to all those promoting their projects through the GoT funding scheme.

Game On Tabletop is a fairly new company with an excellent track record that truly wants to help game creators get their products and projects from dream to reality. They have created a dedicated crowdfunding platform and, after having worked with them, share the same passion about games I have.

For that reason, and until further notice, we are going only to cover crowdfunding projects that are hosted with them.

Yes. That means that if your project is in Kickstarter we won’t be able to help you promote it. We can talk about it once the project has been delivered, but not while is going on. If you are on Game On Tabletop, though, we will do our best to accommodate an interview and turn it into a video and a podcast episodes.

Both Martin and I genuinely believe that Game On Tabletop is the right platform and encourage you to take a look at the features either as a main platform for your crowdfunding, or a support one to have during your production period to accommodate late pledges and pre-orders.

We are very much looking forward to working in the future with Game On Tabletop and with you too!

SEPTEMBER 15, 2020 HeidelBÄR Games, Czech Games Edition, and Horrible Guild are proud to announce Castle TriCon, the first international board gaming convention to take place in a unique virtual 3D world. This online event is the offspring of the famous “Castle Event”, historically held at castle Stahleck in Germany.

Partnering with Confer-O-Matic and TableTopia, attendees will have the opportunity to explore a vast 3D world with their digital avatar, play upcoming games for the first time, and interact with friends via video and audio built into the convention’s client.

Attendees also have opportunities to try the hottest upcoming titles by the three publishers, meet game designers, and participate in games streamed on the mainstage.

ANANSI by Cyril Blondel and Jim Dratwa
Ages 10+ | 3-5 players | 30 minutes
Anansi is a unique trick-taking game with high replayability and a beautiful message to inspire people. Set in the powerful African story-world around famous Anansi, the so-called Keeper of Stories, and illustrated by artists from the African continent.

Under Falling Skies is a solo game with a multi-mission campaign. In each mission, you take charge of defending a besieged city. Your actions are powered by an innovative dice placement mechanic where every choice is both beneficial and detrimental. Fight the invaders city by city. Build a team from around the globe to save your planet and defeat the aliens!

LOST RUINS OF ARNAK by Mín and Elwen

Ages 12+ | 1-4 players | 90-120 minutes
Lost Ruins of Arnak combines deck building, worker placement and resource management in a game of exploration and discovery. Lead an expedition to explore the island, find lost artifacts, and face fearsome guardians, all in a quest to learn the island’s secrets.

A tactical betting game where unwitting unicorns and their mindless desire to run on rainbows are exploited by unscrupulous citizen of the fairy realm for profit… and glory!

VAMPIRE: THE MASQUERADE – VENDETTA by Charlie Cleveland and Bruno Faidutti.

A competitive card game set in the Vampire: The Masquerade universe! Join one of the vampire Clans of the Camarilla; build your hand, play cards and blood to earn the control of powerful Allies and precious Influence points; your goal is to conquer the role of Prince of Chicago!

For more updates on Castle TriCon 2020, visit the website, and register for your ticket to attend.

We are a group of people who love board games and enjoy creating entertainment for players like we are. Back in 2006, we worked together on the first edition of Through the Ages, and we decided that this is the work we wanted to do for a living. Founded in 2007, Czech Games Edition (CGE) has since released over 40 games and expansions. We are a small company, but thanks to our partners around the world, you will find our games in over forty languages.

About Horrible Guild
Horrible Guild is an Italian board game publisher. Known as Horrible Games until late 2019, the company has been founded in 2014 by Lorenzo Silva. Our goal is to design, develop and produce cool and innovative games capable of bringing fun to everyone: we try to make our games stand out from the crowd, both for visual style and gameplay mechanics.

BOOK SIZE? How big should your book be? Because sometimes seeing a 600 pages RPG can be super daunting for a lot of people, and that includes me! Do you need to publish something that huge?

This video has been produced for www.gmsmagazine.com. Please help our channel by subscribing and commenting and support our Patreon Campaign if you can: https://www.patreon.com/gmsmagazine Hope you enjoy the show!

Choosing if you want to publish or self-publish is an important decision. Each has its pros and cons and one has to be ready for the consequences.

This video has been produced for www.gmsmagazine.com. Please help our channel by subscribing and commenting and support our Patreon Campaign if you can: https://www.patreon.com/gmsmagazine

In this video, I explore some of the consequences of going solo vs. going through an established publisher to get your game to the public.

This is an interview with renowned author Peter Wacks about his recent book The Caller of Lightning.

Please help our channel by subscribing and commenting and support our Patreon Campaign if you can: https://www.patreon.com/gmsmagazine

You can find out more about Peter here: http://authorpage.com/peterjwacks/

And get The Caller of Lighting here: https://amzn.to/3dmiioJ

When Halley’s Comet blazed across the sky in 1759, onlookers saw a sight far more spectacular—and disastrous—than they ever could have imagined. Destroyed in a magical battle, the comet is rent in two and appears to strike Earth. The event is known as The Sundering, the moment in which the Old World is separated from the New, perhaps permanently isolating the Americas. What’s more, The Sundering has brought magic into the world—creatures from folklore and fairy tales come to life, along with wizardry and magework unlike anything seen outside of legend. The New World is now far stranger than before, and the Europeans, Africans, and Indigenous peoples on the American continent must forge new bonds if they are to survive.

So, when magic returns to the world of the 1700s, who does the world turn to for help? None other than the father of electricity himself: Benjamin Franklin! But Franklin is in for a shock if he thinks his knowledge of science will prepare him for the world of magic. The master once more becomes the apprentice. But Franklin must learn his spells fast, for he is far from the only one studying magic.

For our main channel: http://bit.ly/GMSmagazine