“Alright, this is my first adventure so be kind,” said Vicki nervously getting her area behind the GM screen organized.

“Fear not, you’re going to do great,” said Thad enthusiastically.

“You have just arrived at Outbound Station the last outpost of the United Confederacy in Unexplored Space,” said Vicky.

“So this is our last chance to resupply before entering Unexplored Space?” asked Thad.

“Yes, and to get information about what you might encounter,” said Vicky. “It’s a massive space station and is used by dozens of civilizations that ply this area of space, including some civilizations from Unexplored Space. The sort of people you have been assigned to make contact with.”

“Great … alright, I open fire with my mass drivers and use two of my antimatter warheads on Outbound Station,” said Thad seriously.

“Yes, I’ll take prisoners from the survivors to question about Unexplored Space and loot the derelicts for supplies,” said Thad with a slight smile. “I … you what?” asked Vicky.

“Just kidding, I dock up and will head to Communal Area,” said Thad with a laugh. “Relax, just trying to lighten things up — you look too tense.”

This column will focus on the process of starting a duet campaign, especially for someone who isn’t that experienced of a GM, perhaps even someone who has never GMed before. In many ways, duets are a great opportunity to try to GM. You have one player and usually this is a significant other or good friend who isn’t going to give you a hard time. It’s a very safe and fun environment for someone who otherwise might be daunted by the idea of GMing. Still you will probably have a host of negative thoughts as even with duets, and an audience of one, it can be a daunting prospect. So first things first, let’s tackle some of the most common fears of beginning GMs. I’m a horrible GM.

Nope, you aren’t. Okay, well, maybe you are, but you know it and that separates you from a lot of GMs out there. The truth is that most GMs are pretty bad and all beginning GMs are disasters. However, you can’t become a good GM without actually running adventures. So maybe you are a horrible GM, but that doesn’t mean you can’t become a great GM. In fact, anyone can become a great GM if they do two things: run adventures and keep trying to improve. That’s it.

So I’m not going to sugarcoat it and say you’re going to do great running your first duet campaign, because you probably won’t, but I will say that you can run a great duet campaign if you work at it. The only way to get the skills to do that is to try. There are no skills that people just know without practice and work and GMing is a skill. My advice is to commit yourself to running three adventures in a campaign and stick to that regardless of how the adventures go, because a common mistake of many beginning GMs is to scrap their campaigns the moment they hit some bumps. Your worst enemy is that image in your mind of a perfect adventure that you want to run, that never happens even with the best GMs, and you need to focus on the fun in the moment not the ideal moment.

My players will hate my adventure.

Not likely. In my experience, most players are very forgiving of new GMs. Players know how hard it is to GM, a lot of have tried to GM themselves and the rest are terrified about the idea of GMing. Most players really try to be nice to a new GM and those that don’t, well, you shouldn’t be playing with them in the first place. Another thing to consider is that with roleplaying everyone can have a great time even if everyone is pretty bad at it. This is because as long as everyone puts in a good faith effort then everyone has a good time. It’s the attitude of those around the table, not their skills, that determines the success of an adventure.

I don’t know the rules well enough to GM.

Honestly, it doesn’t take complete rules mastery to GM, but you do need to know the rules. A beginning GM should stick to a RPG he has played before or a system that is very simple mechanically. There are many skills to GMing and a common mistake is to consider rules mastery one of the most important. It’s not, and if you are stressed about the rules, that stress is draining time and energy from developing the narrative elements of your adventure. Rules are important, and you do need to know the rules as the GM, but don’t stress about it. The rules are there to help, so if the rules are actually adding to your stress as a GM, then there is a problem either with the rules or you. So take a deep breath and realize that knowing the rules is okay, you don’t need to have mastered the rules, and if all else fails ask your players, check the book, or better yet just make it up.

I don’t have the time.

Maybe you don’t and that is a legitimate reason to not GM, but usually when I hear this complaint the problem is that beginning GMs want to have everything scripted out and every eventuality covered. This is why a lot of GMs like published adventures, which are usually very tightly designed to keep PCs in line and following a script. However, for a duet campaign you need to loosen up and this brings us to the last negative thought we will discuss.

What if the players do something unexpected?

This doesn’t happen as often as you may think, but it does happen. The trick is to just make a guess about the consequences and wing it. All you have to remember is that the consequences you determine will affect the player’s future actions. So if a player does something smart or heroic and you like that, then reward the player so he keeps doing that. Once the adventure starts, a good GM just rolls with the punches; the adventure you wrote is only a framework and you adjust it on the fly. Actually, the adventure you wrote is just to get you thinking about the situation; it should never be a script.

What do you really need?

The most important thing you need is a player. If you have a player, the rest falls into place pretty easily, but let’s break it down.

You do need a setting, but you probably need less than you think you need. The goal is not to have an answer for every question, but to know enough to be able to make up an answer for every question. Your goal is to have enough information that you can communicate the feel of the setting to your player. The next instalment will tackle the illusion of depth and some tricks to how to make your setting feel complex, even when it’s not.

Communicate with the player over the PC concept, because the PC makes or breaks a duet campaign. However, once you and the player find agreement, you don’t have anything else to do with creating the PC, except maybe to help out if the player doesn’t know the rules that well. My advice is to not worry about the PC too much; if the PC is at least in the ballpark of fitting in your campaign, then run with it. You’ll never have a perfect fit for the image in your head of the ideal PC for how you envision the campaign, but that’s alright — trust me, your ideal PC really wouldn’t have worked as well as the one your player created.

The whole point of your work is to have an adventure to run. Using a published adventure for your first time GMing is not a bad idea, though it does confine you in many ways and actually is harder to internalize. Remember: your notes on an adventure are merely an outline, guidelines, that are there to help you figure out how the PC’s actions will unfurl the action. From my perspective, all adventures operate around NPCs. Providing stats for NPCs can help understand the NPC, though combat mechanics really don’t help you understand a NPC. I really believe that if you understand the major NPCs involved in an adventure, you can adjust and morph the situation based on the PC actions. So spend as much time trying to understand the NPCs as you spend writing out the challenges. The biggest fault of beginning GMs is to obsess over the rules and numbers and not the story and dynamics that make that story engaging.

What follows are a few tricks for beginning GMs.

1. ALWAYS give an answer.

Many years ago I was a player in a campaign andthe GM had really designed a fabulous setting that was a high-magic empire. He had spent weeks working on the various elements of the setting. In the first adventurem the first question asked was “what is the name of the Emperor?” The GM didn’t have an answer. He froze. He said he would get back to us on that. Right there the campaign ended; sure we ran the adventure, but that moment is where the GM lost the illusion of depth. If the PCs ask a question that about something they should know, give an answer, even if you have to just make something up.

Make up a list of names that are appropriate for your setting for easy reference as your player explores the setting so that you will be able to give names to people on the fly.

Someone should be keeping notes. Usually it’s the GM, but when I run duets with my wife as a player I use her notes to keep things straight as she takes excellent notes. Due to the pace and depth of a duet we may in a month of playing have over a hundred NPCs who are of some important to the campaign. Without notes things get muddled, which isn’t a big deal, but consistency adds a lot to any campaign. 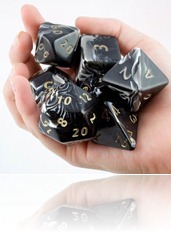 When all else fails, have the player roll dice: a skill check, combat, or even a meaningless roll (just don’t tell the player it’s meaningless). Actually, if you need to stall, you roll dice and look down thoughtfully at the dice while you think.

Don’t do adventure design 30 minutes before an adventure. Relax and get yourself ready to GM. Even if you don’t have something mechanically worked out, by this point, it’s too late to add anything. It’s better to spend the remaining time you have getting yourself relaxed, comfortable, and excited about the upcoming adventure.

Next time we will finally get to the illusion of depth, and how to give your duets the feel of a vibrant and well-thought out campaign, even when it’s not particularly well-thought out.