RPGs I Have Played, and a few comments about them

You may be a better gamer than I am.  Although I love to play, I’m really more of a writer/designer than a true gamer.

I thought I’d make a list of rpgs I’ve played and maybe throw is some comments about them.  This isn’t so much a critical article or review as it is rambling and self evaluation of my own RPG Gaming history.

Believe it or not, the first role-playing game was my own–Tunnels and Trolls.  I played it before it had a name.  I saw the first edition of That Other Game.  I read part of it.  I understood the principles of what Gygax and Arneson were trying to do, but their game mechanics made no sense to me.  I was not a miniatures player.  I went and created my own with rules that made sense to me.  And I played it with my friends, my earliest playtesters so to speak, and made it better, and a couple of months later published it in a limited edition of 100 copies.  That was the first edition of Tunnels and Trolls.

It wasn’t until 2 weeks after publication that I got into my first real game of Dungeons and Dragons, a pick-up game at WesterCon in Berkley that year.  I became rather impatient with the extremely cautious style of play that I saw in the other players and when the Dungeon Master (Game Masters hadn’t been invented yet) offered us a

chance to leave the rather boring first level and get down to the second level of the dungeon, I jumped right in.  All alone!  It was a hole in the floor with the second level visible about 10 feet down.  The rest of the party stood around and watched.  Of course the D.M. sprang a monster on me that was too tough for my beginning character–I remember it being a giant weasel. I fought a round, saw I was going to die if I stayed, and called for help.  Did my fellow adventurers jump down and help me beat the beast? No way! They stood up on the level above and laughed at the noob who was going to die in his first fight.  I thought that was pretty chickenshit.  They thought I was a reckless fool.  Well, I didn’t die.  I was carrying a long spear as part of my weapons, and I used it to successfully polevault back up out of the second level.  I think I had to roll an 18 or better on the D20 to do so, but I made that roll, and lived.  A short time later, I took my first opportunity to get out of the game and go do something else.  And I didn’t play that other game again for years.  In the 38 years since then, I think I’ve played some version of that other game about 5 times, generally with more success than my first attempt, but other players still consider me extremely rash and foolhardy.

I did learn to play some other rpgs though.  I am still a big comic book fan.  When the first superhero rpg–Villains and Vigilantes–came out, I jumped into it early, and got my regular role-playing gang in on it also.  I remember that my superhero was called the Cretan (pun intended).  He wore a mask made out of a paper sack with eyeholes in it that normally lived inside his hat and could be pulled down to cover his face when he had to be a hero.  The Cretan had the power to create illusions and become insubstantial.  He could make things he touched insubstantial also.  In his ghost form he was mighty hard to kill.  I had a blast with Villains and Vigilantes.

Back in the 70s and 80s I went to a lot of sci-fi conventions in California.  Of course I met both the Runequest crew–Greg Stafford and friends, and the Champions crew–S

teve Peterson and George MacDonald.  They are all still friends of mine today.  Champions was a stronger design than Villains and Vigilantes and sort of took over among those of us playing superhero rpgs.  I played it a lot back in the 80s and have played it twice in the 21st century, once at DundraCon a few years ago with Peterson and Harlick and some of the old Champions gang.  Very fun!  We had a great game that night.

I have only played Runescape a few times, but I am a big fan of that game, and of its creator, Greg Stafford.  Greg is the most original of all early rpg designers.  Glorantha is the best fantasy world ever created for a rpg (in my humble opinion).  I still like Tunnels and Trolls and my own Trollworld better, but Glorantha beats all the rest.  Runequest was the main game for the Chaosium

for a long time, but they sold it, first to Avalon Hill, and most recently to Lawrence Whitaker.  I got a chance to play it with Lawrence at OSR-con in Toronto last August, and I had a blast.  The game is in good hands.

I eventually got a chance to do a game for the Chaosium.  That game was Stormbringer, an adaptation of Michael Moorcock’s Elric series into frp rules.  Steve Perrin started out as my editor and wound up as my co-author.  We made, I think, a very good team, and Stormbringer won an Origins Award for best role-playing game (tied with Call of Cthulhu) the year after it was released.  Considering it is actually one of my games, I’ve only actually played it perhaps a dozen times.  Art was by Frank Brunner who was a well-known comics and fantasy artist back in 1980.

My first outer space science fiction game was Marc Miller’s Traveler. I remember it fondly as we often had more fun creating

our characters for it than actually playing it.  Three little booklets in a box.  Infinite fun!  I ran a play-by-mail version of Traveler for a couple of  years in a fanzine published once a month through the magic of photocopy.

Traveler was my second sci-fi game because actually I had already created one of my own.  It was called Starfaring, and people who have heard of it think it might be Trolls in Space, but it wasn’t and isn’t.  The unit of play was actually the ship, and not the people who rode around in them.  As roleplaying games go, it was rough, very creative and ahead of its time, and never very successful, and quickly forgotten.  It had great cartoon art by Ernest Hogan, some of which was pretty damn sexy.

This blog is getting pretty long so I’ll call it right here.  As you can see, I played most of the classic Old School games back when they first came out.  To tell the truth, I played my own games most, and liked them best, which is not to say I didn’t recognize superior games when I saw them.  I’m always willing to play someone else’s game, but such encounters never last.

I haven’t covered all the games I used to play or would play again if I got a chance.  If there’s any interst, perhaps I’ll do a part 2 for this blog and talk about some of the other games I’ve played and liked.  I usually don’t play games I don’t like.

To be continued? – If you’ve played any of these games, why not leave a comment? 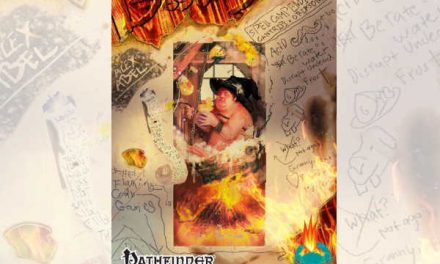