Alignments; more than just about character!

Recently in my group something happened. Well, many things happened, but one in particular, that made me realise that alignments do count for a lot in a game in which there is no clear antagonist.

Let me elaborate. In our quest for adventuring/justice/gold/whatever, we defeated a leech. It wasn’t a particularly powerful leech. Just enough to bring us to the brink of death but not enough to scare us. Well, it was close. Actually I was a bit scared. Once we destroyed it, some items were left behind. Armours, amulets, a bone mace artefact. You know, the usual a Leech comes out with every day when leaving the sarcophagus.

The thing is that my character is a wizard who wants to become the most powerful wizard in the world. For him magic is everything. And he is an atheist who thinks that divine magic is just another way of magic that gets triggered by the placebo effect that is the belief in the existence of a being of superior power. As the mace is a REALLY powerful artefact able to control any number of undead, he’s keen on having it. Of course the mace is also evil and is sentient. It’s so evil that, when a non-evil character touches it, it drips blood to the point of being impossible to touch or hold. It is THAT evil. And I want it.

However in this game, a very changed edition of D&D 4th Ed. my friend has done away with alignments. The initial problem that’s created is that the rest of the players (and thus their characters) assume we’re all good. Maybe because, in real life, we’re all pretty good. I mean, we are naughty at times, but nothing serious.

So Bronquiolus (my character) happens to be kind of lawful naughty. At the very least, random neutral.

When I announced I wanted to keep the mace, my friends all looked at me as if I was kind of stepping on a large piece of crap that would stink for months. They were rather surprised that I was showing some evil tendencies. It wasn’t until I explained that Bronquiolus is actually, kind of neutral with evil tendencies that they understood.

I hear a lot of the time, including from my own friends, how alignments are useless and we can do away with them. Well, in a game like Dungeons & Dragons, we could do with them.

Here’s my theory. In D&D there is no one antagonist for all. In the Lord of the Rings there is Sauron. In Warhammer there is Chaos or the Emperor. In Cthulhu games there are the Old Ones. And so on and so forth.

If you don’t have an alignment, or, at the very least, a way to define how your character rolls in terms of morals and ethics, it is very easy to assume the character will be good, just because she’s following the same adventuring path. This is not the case. A legal evil character might be just as interested in saving children, if anything because she might want to perpetuate a species to harvest them later. An evil character could be interested in destroying an Ithilid, just as much as a paladin; of course for different reasons.

Having an alignment, or similar –  the themes proposed by Wizards of the Coast can be just as useful and more imaginative – is the easiest and most convenient way to keep that in mind. It will help the other characters react and role play, it will help the DM prepare challenges and rewards to suit the character and player, and will provide with role playing opportunities in any game.

It also gives a good arena for quirkiness and idiosyncrasies. For example, everyone thinks the mace is evil just because it has Necromancy in it. What if it wasn’t at all evil? What if it were using Necromancy as a source or tool to do good? How would you know?

Yes is true that the role playing experience in itself should give you your character alignment, but don’t you think having the background to fall back on can be of great help?

So What’s The Demi-Human Called, Anyway?

Dear Some Straight Gamer – Why should you? 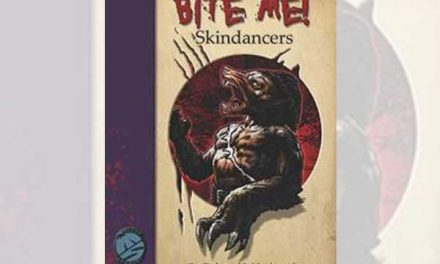