The editorial by Robert N. Emerson already shows and the subsequent adventures do as well – Rite Publishing’s Kickstarter to amp further up the quality of the magazine was a full success – beyond the full color art throughout this magazine, it is especially the cartography, which has benefited extremely – Rite Publishing overlord Steven D. Russell did not pinch any pennies budget-wise here: The cartography in this book is rendered in stunning, gorgeous full color by the hands of Tommi Salama. If you’re by any chance not yet familiar with him – he’s imho the heir to Jonathan Roberts. Yes, that beautiful. So production-value wise, we get a steep step upwards, so let’s see whether the modules themselves hold up to the art, shall we?

The following is a short overview of the 3 modules herein, which necessarily means the text contains SPOILERS. Potential players are advised to skip to the conclusion, especially since the modules herein tend to be a bit…let’s say unconventional.

First of which would be Mike Welham’s level of Ruins Perilous, this time intended for level 3. What is “Ruins Perilous”? It’s Rite Publishing’s serialized mega-dungeon, situated near the city of adventurers, Questhaven. Beyond being a mega-dungeon, it’s also a kind of testing ground for adventurers and a means of increasing one’s status within the hierarchy of the adventurer-governed city. As such, the dungeon is lethal, but also a kind of hyperreal simulacrum – essentially, post-modern dungeon-crawling. The created nature of the dungeon allows for some interesting tricks indeed and both ratfolk populace and the other challenges herein fit this theme rather well – whether it would be the traps or the required guild forge to properly add the clout to show they’ve “completed” this level – the strange nature of the dungeon is well-reflected here. One of the crucial differences here would be that the forge this time around is easy to find – but in the form of an organ and furthermore, locked – to activate it, the PCs will have to brave sense-themed encounters, which include giant skunks and an lion consisting of sonic energy. An interesting dungeon level indeed, though one that could have easily been made even more memorable by providing an stronger tie to the theme of senses: What if each key required the sacrifice of one sense, albeit temporarily? Blinding the ranged fighter, depriving the rogue of the sense of touch, making the scout deaf, that sort of thing? As a kind of didactic lesson for adventurers that they have to depend on their allies to help? I once used this ploy in an adventure of mine and my players loved it – even the spellcaster, when he was muted and I required him to roleplay or write interactions… As written, the level has a strong theme, but one that is, at least for my taste, not pronounced enough and thus misses a treasure trove of roleplaying opportunities to supplement the roll-playing dungeon exploration.

Michale Allen’s “Legacy of the Fishermage” (for level 9 characters) is an adventure, mood-wise, after my tastes: The sage Muchadha was after the regularly (every 500 years) respawning “Salmon of Truth” – last time, he was foiled by his apprentice, who, by burning his thumb on the fat, accidentally got the salmon’s wisdom, thus becoming a wise, but thumb-sucking hero. Yeah, this adventure is kind of goofy. The fishermage is gone, but now an ogre has stolen clues pertaining to the locale of the returned salmon and the players are on the brute’s trail, alongside the friendly (as far as dwarves go) goblin-converting priest Ruag the Daft. To emerge victorious from this quest, the PCs will have to deduce the truth behind the legends, riddles, explore the fishermage’s grotto (and defeat his failed, second apprentice…no longer human) and finally, track the ogre and confront the salmon. Yeah, confront. The salmon can turn into huge size and is rather deadly – death by salmon is surely a fate most players will try to avoid, if only to avoid all the cackling… All in all, a fun, uncommon adventure with a lot of winks, a good variety of roleplaying, combat and using one’s brains and plenty maps and intriguing terrain to support it – nothing to complain here!

The high-level module here, for level 18 characters, is provided by Tricky Owlbear Publishing’s Bret Boyd – and if the title “Paradox” isn’t enough of an indicator, yes, time-travel is included. 1300 years ago, the archmage Delgoon created an artifact that broke down the boundaries of the planes and time itself, the sphere of ages. Yeah, a McGuffin, but wait a second – another caveat: The module is a campaign ending event – or alternatively, a complete game-changer. Why? Because the PCs visit an archeological dig, where they find statues of themselves – more than a millennium old. A sphere subsequently transports the PCs back in time – to the apocalypse they obviously…stopped and no one recalls? As the planar boundaries in the past come crushing down, the PCs have to find a way to diffuse the situation and stop the collapse. Over the course of this, the PCs are hurtled through time to undo their greatest regrets, to get a second chance…to vanish with the sphere, have the apocalypse undone and perhaps even return. And this is where the module, for me, kind of necessarily falls a bit apart. I once had a time-travel plot in my campaign and planned it for years, setting up blank spaces, mysterious happenstances etc – a DM is advised to do so for this as well. The emotional impact of the module hinges a bit on that. Beyond this, there’s another problem – the suggestion to undo things – that’s not how time-travel works.

Changing the past changes all from this point onwards, preventing potentially (or at least, modifying) the choices that led up to the PCs getting to the point of time travel in the first place, preventing them from enjoying the benefits. It’s the crucial conundrum of time travel and the module’s “satisfying” reward for the PCs breaks this one tenet. To take an example – what if a paladin’s regret was being unable to save a king? Now, he manages it and dies. No war erupts, thousands don’t die, friends and allies perhaps perish due to the paladin not being there to save them… even beyond the conundrum mentioned, the decisions influence the other players and even if the conundrum is ignored, the nature of collective adventuring is weird and at the very latest, here timelines diverge. So if your PCs screwed up a world’s canon big time, that’s a nice way to hit the history eraser button – but whether your players are okay with that…best be sure to check that, otherwise the implied undoing of their deeds or the sloppy “PCs are still around, in spite of changes”-ending stratagem could frustrate you to no end. Now don’t get me wrong, this module isn’t bad, but it fails to live up to the logic of its own gimmick by falling prey to the problematic past modification bug. Then again, your players might not care – I know mine would and I’d never, ever hear the end of it. That being said, with high-CR Aeons, chain gun studded lion robots and several other damn cool high-CR critters, many of which with their own artwork, this module still has quite a bit to scavenge.

Next up would be a short encounter by Creighton Broadhurst of Raging Swan Press, providing the complex haunting of spectral orcs and the treasure they guard. Steven D. Russell also provides open sandbox advice, (including some nods towards cool 3pp-supplements) – this time, all focused on getting instant NPCs (and how to handle statblocks, art, etc.) and where to scavenge them from -including a cool multiclass CR 15 sample build.

Editing and formatting are top-notch, I didn’t notice any significant glitches. Layout adheres to Rite Publishing’s two-column full-color standard and, as mentioned, the copious original pieces of artwork and cartography render this a good premium product – no complaints on the production values side of things. The issue also comes fully bookmarked with nested bookmarks, with high-res jpgs of the 9 (!!!) maps – but not including key-less version of all maps – a minor complaint here.

This one’s hard – on the one hand, the increase in massive production values helps and amps up the bang-for-buck ratio by quite a bit. I’m a big fan of Mike Welham’s writing and the concept of the dungeon, but I also felt that this module did not make full use of its theme, falling slightly short of excellence. Michael Allen’s module is hilarious and fun and gets two thumbs up from me, as do the supplemental articles and the monsters of the last module. On the other hand, at least for me, the final module doesn’t work – at all. It’s the, to quote the doctor, “Wibbly-wobbly” concept I just can’t get myself to…like. (Yes, I know I’ll be booed by plenty people out there…) – Time travel is NOT something simple and the module fails to address the consequences properly. And yes, I’m aware that for quite a few people, how the module handles it is no problem – but every time, Doctor Who time-travel starts, I gnash my teeth (in spite of actually loving the series, so put away the pitchforks…). I’m more of a Primer kind of guy. But I *know* that for some of you out there, it will be a huge of an issue as it is for me.

Now usually, my gut reaction would be to rate this issue slightly more down than I would – but on the other hand, my gripes with it are admittedly kind of subjective – the realization of untapped potential, the way time travel is handled…you can have radically different opinions on these. Especially the former – your players might actually loathe the suggestion I posited above…or they might love it. In the same manner, your players might actually enjoy the final module in here and with some copious DM foreshadowing, it won’t feel abrupt. So yeah, if you were shaking your head at my complaints (and want the creatures, the awesome second module or get these just to scavenge parts or the glorious maps…), go get this. If you found yourself nodding, detract one star. Since my policy is in dubio pro reo, my final verdict will clock in at 4 stars.

If you have enjoyed this RPG review, please consider becoming a patron in Patreon to help support this website, podcast and video channel. Every click helps us a great deal! 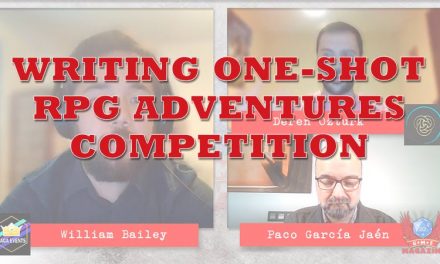 Writing one-shot RPG adventures for this competition with Saga Events