Adventure Path Iconics: Path of Undeath is 25 pages long, 1 page front cover, 1 page editorial/SRD, leaving us with a total of23 pages of content, so let’s take a look!

From the get-go, I feel the need to mention something – these Iconics are not for a traditional AP in the sense of Paizo’s published paths. They’re rather intended for the recently released Obsidian Apocalypse setting/campaign toolbox by LPJr Design. While the characters herein might work with Carrion Crown, they are ALL very uncommon races, i.e. those from Obsidian Apocalypse, meaning that they’re slightly stronger than the core races and that they, fluff-wise, tend to be rather monstrous. Personally, I draw a line between gothic horror and apocalyptic survival horror like Obsidian Apocalypse, so that’s something I *THINK* you should be aware of. The characters have been created with 150 GP starting gear and 20 point-buy. The characters also come with information to modify the characters to 15 and 25 point-buy as well as suggestions to improve them over the first couple of levels. Each character comes with a sample quote that gets you in the mood for playing him/her.

The first character herein would be Mik’Quol An-Str-Natk, an Osirian cleric of Zebadiah. Osirians are essentially dark-skinned humans that can tap into necromantic hellfire – which is much less impressive than you’d think – it’s essentially temporary fatigue-causing rays at will that act as disrupt undead against the undead. Per se, I have no gripe against the ability, though the very “cool” name and the rather puny effect would get a chuckle out of my group. Osirians also get some bonuses to skills, improved initiative etc. – but for racial info, please check my soon-to-come review of Obsidian Apocalypse. Saved from the deadly vampiric predators that roam the world of Abaddon by the legendary last, half-burned angel Zebadiah, Mik’Quol may not be the sharpest tool in the guerilla shed of Osirians, but he is an interesting character.

The second character in the array would be an infernal sorceror called Xasturian. As an Infernal, he is essentially one of the red-skinned tieflings of Abaddon and thus has natural claw attacks and makes use of the alternate racial trait that nets him +1 to all saves. The son of a succubus, he was raised by his now disappeared big brother – and as befitting of his bloodline, he is both adept at blast foes and charming the ladies. He also has a habit of speaking of himself in the third person. Generally, a rather cool build, though personally, I probably would have gone with one of the more interesting infernal racial traits. His statblock also suffers from a formatting glitch – the Offense-header is not properly highlighted against the rest of his statblock.

The third character is one I have a certain positive bias towards – why? Because Ilita Faara is a Khymer. What are these? Essentially, they are discorporated, corpse-possessing sentient puddles of psionically-charged, toxic blood that require fresh bodies to sustain their existence. They may also burn their body to enhance their psionics, increasing ranges, empowering powers or even regain power points. The latter has me a bit concerned, I might add. Personally, I’m also not a big fan of the fixed DC for the fort-save they have to make to determine whether this body-burning deals one or two points of con-damage – a more flexible DC would have made more sense to me. It should be noted, though, that at least regarding the psychic warrior (yes, Ultimate Psionics-compatible ) Ilita, this is not too relevant. She is an interesting character, striving to meet the demands of a forgotten code of conduct, buried in her memory by the cataclysmic event that transformed her species into sentient blood. Her choice of weaponry with slings and rapiers is not too interesting – but her power selection is solid with biofeedback and call weaponry, if not too creative. Over all, a nice character that comes with all required pieces of information to run the strange race and that also comes with nice angles for roleplaiyng in her propensity for wind instruments.

After that, the next character would be Treeshearer Snarltooth Swifttongue, a Lykian ranger. Lykians are essentially werewolf-like humanoids. Snarltooth uses an alternate racial trait that allows her to emit a howl 1/hour that can cause her enemies to become shaken. Lykians also get a primary bite attack at 1d3 that also comes with a dex-damaging disease rapid onset disease, usable con-mod times/day. Lykians also get 50% miss chance in concealment (but this increase does not make total concealment!) and generally are adept at stealth, but also suffer from double damage by silver weapons. Born to a Lykian pet of a powerful wizard who had to escape to the wild, her standing in the tribe was precarious and once when her animalistic rage burst forth, she once ripped a bigoted human apart – thus requiring her to leave the tribe behind – a tribe that never liked her in the first place. A gruff and hardened survivor, she makes for an interesting choice, though you should be aware that the Lykian race imho is more powerful than e.g. Osiriani.

When there are a special kind of tieflings, there better be also descendants of heavenly forces and indeed – in Obsidian Apocalypse, these beings are the offspring of the last angel Zebadiah and thus, these beings, known as Exalted, bear their father’s name – like Yeremil Al Zebadiah, the Exalted monk. Among the racial abilities chosen, Yeremil chose for cure light wounds and remove fear 1/day. As a character, Yeremil was born to a farmer’s daughter, who was first ostracized, then revered for her child. Yeremil believes in his preordained destiny -he is fanatic, an ascetic monk…and believes, he has a claim to godhood. He is per se a cool character, though his statblock once again has one header not properly highlighted – this time, it would be “defense.”

Setiphet Sir Lykash, the harrowed fighter, would also be interesting – first, by her race. The most reviled of the races of Obsidian Apocalypse, Harrowed are the results of the union of the living and the living death and thus, these beings are exceedingly hardy and come with some undead-like traits. Setiphet was born from a terrible tragedy involving the death of a true love and violations – but still, her mother managed to love her and provide what few harrowed get – a loving environment where they can develop a sense of right and wrong. Thus Setiphet has developed into an egalitarian champion of the downtrodden – a champion the ignorant fear and loathe.

Finally, there would be a Genesai rogue, Mouse. No, that’s not “Genasi”, it’s “Genesai”. Yeah. Not a fan of the name, but the race’s idea is actually quite awesome – born from the mix of angelic and demonic heritages, these beings contain the blood of both upper and lower planes, marking them with an unnatural aura, but also allowing them to create a blade of conflicting energy, the shattersoul blade, and damage foes with force damage bonuses. A streetchild born into poverty, her fate would have been grim in any other world – in Abaddon, this is doubly true. Thankfully, she was recruited early into a thieves’ guild – unfortunately for her, though, the Boss of the guild tended to lock her up, even though she proved a superb cat burglar. Breaking free, tipping off the guards and no, truly liberated for the first time in her life, she wanders the world. A cool, nice character, though her selections of daggers as weapons of choice isn’t that impressive.

Editing and formatting are good, though not perfect – I noticed a couple of minor formatting and editing glitches. Layout adheres to a beautiful 2-column full-color standard and the pdf comes with a more printer-friendly version as well. All characters get DROP-DEAD-GORGEOUS mugshots by Juan Diego Dianderas and the pdf comes fully bookmarked for your convenience.

Kalyna Conrad and Eric Hindley have created a nice array of characters here, with several diverse backgrounds and interesting histories. That being said, the per se vivid prose tends to feature some minor hick-ups here and there. Another slight issue would be that, if you’re looking for core-race characters, you won’t find any humans here and the Obsidian Apocalypse races aren’t perfectly balanced among themselves – e.g. the Lykians could be considered rather strong and among themselves, the characters have different degrees of efficiency in their choices of equipment, skills, etc.

That being said, the characters per se are well-written, if not as brilliant as some I’ve seen in the line – probably also due to the lack of an explicit campaign starting point, they don’t have much in the way of tying them together – one of the smarter things both this series and similar pregen-collections did. So yeah, get ready for coming up with a way why these guys and gals hang out together. This, of course, is partially the result of Obsidian Apocalypse being highly modular in its primal catastrophe.

I maintain, though, that by writing connections into their background, the value of these folks could have been further increased. Now don’t get me wrong, I’m complaining on a high level here, but another thing I won’t get used to is the amount of blank space – each character comes with 3-4 pages, 1-2 pages for the statblock, 1 full page of background, description etc. and on the final page, the rest of said personality/background information – which amounts sometimes to 2/3 of a page covered, which is nice…but also has instances, where one or two paragraphs are all that is on the page. Yes, this is graphically offset by a greyed image of the mugshot in the background and not TOO aesthetically jarring, but I caught myself thinking that all this blank space could have been used for something – more story, more distinguishing features/mannerisms, more level progression advice, variants…something. This phenomenon did show in other Adventure Path Iconics-pdfs, but in this one, it is especially jarring, with two characters (who have some tantalizing tidbits in their background that could use further development!) sporting using about 1/6 of their final page.

Now don’t get me wrong – this is by no means bad. In fact, It’s rather nice…but still, I found myself just not as moved by the characters as in other installments of the series. As pregens, though, they do a serviceable job that allows you to jump right into Obsidian Apocalypse and thus, I’ll settle on a final verdict of 3.5 stars, rounded up to 4 for the purpose of this platform.

Adventure Path Iconics: Path of Undeath is available from: 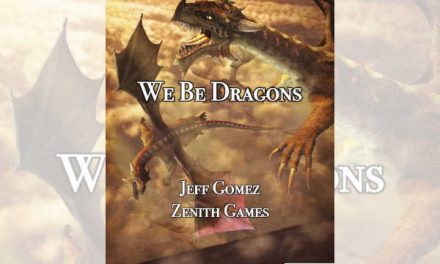 We Be Dragons – RPG Review

Advanced Feats – Visions of the Oracle