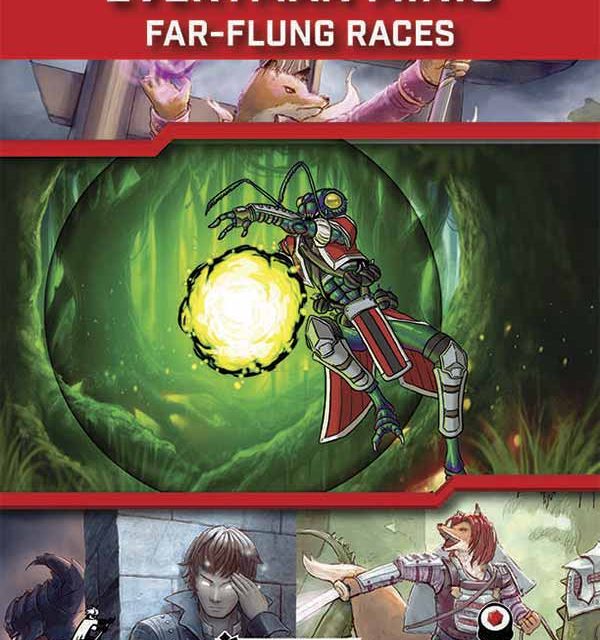 So, what is Everyman minis: Far-Flung Races?

Well, in essence, Far-Flung Races are races from Starfinder and Alien Archive, reverse-engineered for use with Pathfinder, as playable races. After a brief racial summary, we dive into the races. Since most folks will be familiar with the racial concepts themselves, I will focus on the mechanics:

+2 Dexterity and Wisdom, -2 Charisma; monstrous humanoids with aquatic and amphibious subtype. They have low-light vision instead of darkvision 60 ft., 20 ft. base speed, 30 ft. swim speed, cold resistance 5, +4 to Stealth while in water and blindsight 60 ft. while completely submerged in water. (As an aside – since this is based on sonar and rather potent at low levels, I’d suggest using the Vestraadi’s sonar –engine from AAW Games’ Underworld Races & Classes tome for games with a lower power level.)

+2 Strength and Intelligence, -2 Dexterity; monstrous humanoids with a speed of 40 ft.m these guys always know where North is and get +2 to Profession (driver) and Survival as well as a 1d4 gore attack. (The natural weapon requires reference to the table for type and damage inflicted.)

+2 Dexterity and Charisma, -2 Intelligence; Skittermanders are Small, get low-light vision and may 1/day as a swift action take another move action to move (basically a built-in quickrunner’s shirt). They count as +1 size category larger for CMB and CMD for grapple-and grapple-related purposes. Skittermander’s are 6-armed, but may only dual-wield. Instead, their arms allow them to retrieve 1 stored item or draw a weapon as a swift action. Nice one!

+2 Constitution and Intelligence, -2 Strength; Verthani get Skill Focus as a bonus feat and as a standard action, they can 3 + Con-mod times per day, augment a part of their bodies: +1 to physical skills, +2 to initiative, +2 to Perception or + 2 to saves vs. disease and poison. This lasts until the ability is used again. They get low-light vision and may, as a standard action, match skin to terrain for +2 to Stealth. While the flexibility is potent, it’s not overbearingly so. Nice one!

Since this is only a mini-pdf, there are no favored class options, race traits, archetypes etc. included.

Editing and formatting are top-notch, I noticed no glitches on formal or rules-language level. Types etc. are concise and well-implemented. Layout adheres to a new and colorful two-column standard with a border of artworks. The pdf has a nice piece of artwork and no bookmarks, but needs none at this length.

This is an unpretentious little pdf by Matt Morris that I enjoyed more than I thought I would. While Kalo and skittermanders are slightly more potent than the other races, I have no balance-concerns for them as written, and quite a few races herein actually have managed to do something interesting. Granted, e.g. the vhesk are kinda boring, but as a whole, I consider this to be a successful little pdf. You certainly can do MUCH worse regarding races! In fact, I could list a ton of races that waste a ton of space and that end up less interesting and precisely-executed than the content within this pdf. While I wished each race had received its own book to shine, you certainly get a nice array here. Hence, my final verdict will clock in at 4.5 stars, though I do feel that I have to round down for this one.