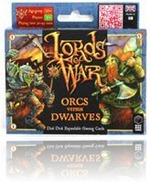 Lords of War was released to much acclaim at Dragonmeet in December 2012. And I mean to much acclaim because that very next year got the UK Games Expo award for Best Strategic Card Game, along with Lords of War: Dwarves vs. Lizardmen.

Expansions have been released and the game is gathering momentum and strength in numbers of fans with some promising future ahead of it and its designers.

Partly because he lives round the corner from G*M*S Magazine and partly because he’s a truly excellent fellow and nice as few, we invited Martin Vaux, co-designer of the game and one of the people behind Black Box Games so we could ask him about the game, past, present and future.

If you have enjoyed this podcast, please consider donating a small amount of money to help support this website or simply click the advert below. Every click helps us a great deal!