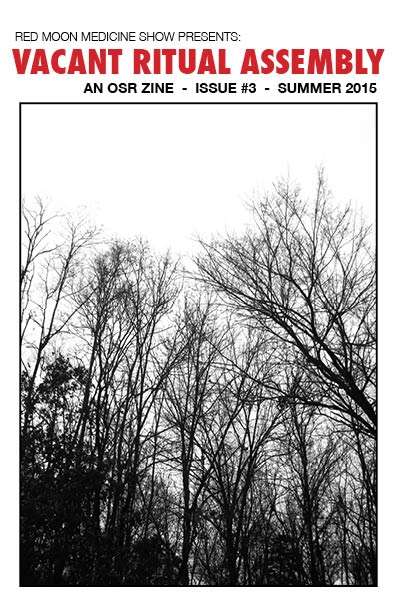 Vacant Ritual Assembly n.3‚’zine clocks in at 24 pages, 1 page front cover, 2 pages of editorial/ToC and notes on recommended files/media, 1 page back cover, leaving us with 20 pages of content, so let’s take a look.

Vacant Ritual Assembly’s pages are laid out in the standard 6’’ by 9’’ (A5) pamphlet style for many OSR-zines, which means you can fit up to 4 pages on a given sheet of paper – in theory. In practice, printing this one out yielded issues for all printers I used, which may be relevant to your interest. I am not penalizing the pdf for that, though.

As before, the default OSR-rules assumed herein are the LotFP (Lamentations of the Flame Princess) rules.

The first article herein depicts the “Dragon trench”, inspired by a real life site in Missouri . the trench ostensibly was created by a dragon crashing down onto the earth with incredible force, The location features a brief introduction, a nice b/w-full-page artwork and a stylized hexcrawl map spanning two pages – the hexes use cut-outs of the cover art as a backdrop, for a weirdly artistic use of resources that I somehow ended up enjoying. A hex is noted to span 5 miles and 6 rumors and an event/weather table is provided for your convenience. The section includes a mini-bestiary of 6 creatures – fairies require that you make up effects, and there are 3 sample plants with supernatural effects, though annoyingly, no silver values for them are provided. This is particularly relevant, since one of them can prevent spell slot loss upon casting a spell, which can be super potent.

The region itself comes with 7 keyed locales noted, though these, as a whole, are pretty potent – some guy has boots of water walking, while an intelligent +3 longsword, sans drawbacks, just awaits being found. I consider this, magic-level wise, to be somewhat overkill, considering the dangers faced. Not a big fan. Furthermore, magic item formatting is inconsistent throughout the installment.

The area also contains the Dragon Clan, a legacy organization that fights the minions of The Sting, the big antagonist here. Their VERY brief write-up doesn’t tell me that much about them, and the map for the fortress they inhabit is solid. The section also introduces the falconry skill and notes stats for the critters and use in combat. Fun aspect. Stats for 4 notable knights/dames are provided, alongside stats for their squires, dubbed “The Lost Boys”, which got a chuckle out of me.

After this, we are introduced to the Thundercloud druids, the primary source the Ghoul Market (see VRA #1) has for fairy amber, an order of druids that wield a new type of flintlock musket. These druids also fabricate three types of flutes that act as spells in a can. Odd: The Play Wind skill used to activate them isn’t fully depicted, as the falconry skill is. My favorite aspect of this article would be the brief symbol language provided for Ogham. Notes for PC thundercloud druids are provided.

After this, we take a look at the timberwives, who get my favorite illustration herein – and no, the reason for this is not the exposed nipples featured here, but rather the badass, dynamic pose. They are horrific thralls to father Sycamore, neither fully human nor plant, and manage to evoke more atmosphere in their one page than any article herein before them. I liked them. Stats are provided.

The next article, based on a traumatic experience with stinging insects, includes the stats of the aforementioned lord of stinging creatures “The Sting” (not to be confused with the weird wrestler), and we get a nice map of a wilderness locale and an associated little dungeon themed around this adversary and the creatures and folks serving the being.

The final section of the pdf sports an interview with Rick Saada on the roguelike he wrote.

Editing and formatting are good, but not as tight as in previous installments, formatting is simply not as tight. Layout adheres to a 1-column b/w-standard and artworks and maps are surprisingly copious for a humble little ‘zine; as a whole, aesthetics-wise, this is pleasant. The pdf has no bookmarks, which serves an unpleasant comfort detriment.

Honestly, after #1 and #2, I was rather disappointed by this installment of Vacant ritual Assembly. While Clint Krause’s imaginative potential shines through here and there, this is, as a whole, a rather vanilla experience. Now, don’t get me wrong – I do enjoy the idea of taking a childhood mythology and developing it into a location/module, but the supplement doesn’t do that compelling a job here; the innocent eyes widened in abject terror at the sight of stinging things is not truly conveyed; more hazards and terrain features/peculiarities would have done wonders there. The installment, in short, feels less refined – which can also be seen in the rules-language hiccups and omissions.

All in all, I did not get much out of this installment, though that may be different for you. However, if you do end up using this, be well aware of the rather powerful magic items littered throughout, which imho not only lack LotFP’s usually unique flavor, but which also are in no true relation to the challenges faced. As a whole, I consider this to be a rather sparse mixed bag, my final verdict clocking in at 2.5 stars, rounded up due to the low price-point and appealing aesthetics.

Splinters of Faith I